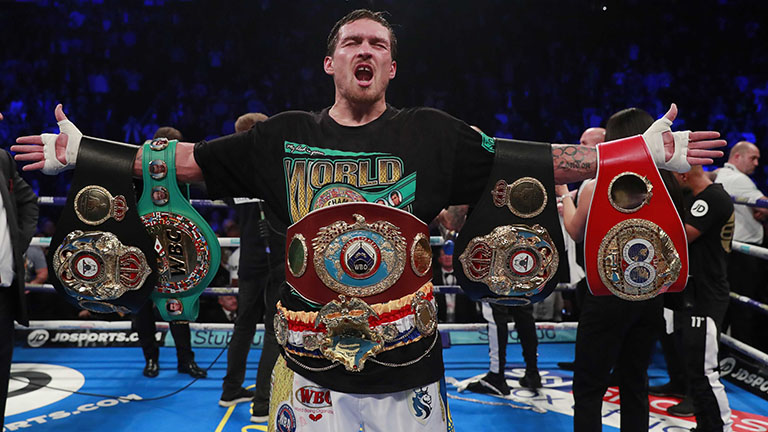 Oleksandr Usyk confirmed as the mandatory challenger for the WBO heavyweight title, one the belts Andy Ruiz seized from Anthony Joshua

OLEKSANDR USYK has been installed as the WBO’s mandatory challenger and Andy Ruiz is confident that he will repeat his win over Joshua then line up the former cruiserweight champion. Usyk beat Tony Bellew in his final fight at cruiserweight last year and immediately set his sights on the heavyweights.

Current IBF, WBA and WBO holder Ruiz, though, has vowed to repeal all challenges to his throne, starting with Joshua should they meet again. “He’s not good at boxing,” he told multiple outlets. “The rematch is going to be the same. I know his flaws. The only thing he can do is just run around.”

Eddie Hearn has got a rebuilding job on his hands as he bids to bring Anthony Joshua back to the top of the heavyweight tree following that shock seventh-round defeat to Ruiz. Yet he also has an eye on the other two big names in the division as he believes that Deontay Wilder will rematch Tyson Fury in his next fight.

The WBC holder is pencilled in to meet Luis Ortiz, but Hearn has told Boxing Social that Wilder is likely to meet Fury again after quickly wiping out Dominic Breazeale last month. Fury kept his end up by summarily dispatching Tom Schwarz in two this month to keep hopes of Wilder-Fury II alive following their hotly disputed draw back in December.

“I don’t believe Wilder will fight Ortiz. I think he’ll fight Fury next,” stated Hearn. “I think that’s what they’ll do, and the winner will have to fight Dillian Whyte. That’s how I see it going. I don’t think Wilder now will take the risk of Luis Ortiz, which is very bad on Luis Ortiz considering they made him turn down the Joshua fight.”

He added: “I think they’ll go straight into that fight at the end of the year and the winner will have to fight Dillian Whyte.”

A policeman based in Warwickshire is helping get young people off the streets and into the gym.

PC Lloyd Walton hopes to use boxing training to help clean up the mean streets of Nuneaton and Atherstone, telling the Coventry Evening Telegraph that: “There are issues with antisocial behaviour, minor criminality and drugs. They start off with a bit of weed and before you know it, they are county lines dealers.

“Before I left Nuneaton, I took three weapons from kids, it is frightening the way it is going. We had gangs of 30 kids running around, mainly Mancetter and the town centre, we were getting 20 jobs a night, now we are getting next to nothing.”

“I started some one-to-one sessions with a couple of them at Dave’s on Station Street, then the word spread,” he added.

“Some of these kids have no role models, they don’t go to school, they have no aspirations, they are blind to the world. They are left to their own devices but they can come to us and get discipline, aspiration and respect.

“I have been boxing for 35 years, my grandad got me into boxing, what worked for me, I hope works for other people. I could have really gone the other way, boxing stropped me getting into too much trouble.”

Having recently hung up his gloves, the PC now runs a weekly session geared towards 13 to 21-year-olds of both sexes, using his own time to try to make a difference in his local area.

The scheme is funded by Warwickshire Police and North Warwickshire Borough Council and Walton believes that they will continue beyond the six-month trial period, which could lead to the creation of similar schemes elsewhere. “I thought we might struggle to get people but we have had so much interest,” he said.

Amir Khan’s showcase outing against Neeraj Goyat in Jeddah on July 12 will be televised by Channel 5 and Hughie Fury has been added to the bill. Khan and Goyat will contest the WBC’s Pearl welterweight title — it is basically a made up title — while Fury meets former WBC heavyweight holder Samuel Peter, who recently made a winning return to the sport.

“I’ve a job to do and it’ll get done,” stated Fury. “Samuel Peter is a seriously solid, dangerous veteran who can clearly punch but I relish the challenge. It’s always great to visit different places and get my name around the world. I’m expecting a great atmosphere. There’s only one thing on my mind, getting to the very top, winning the world title.”