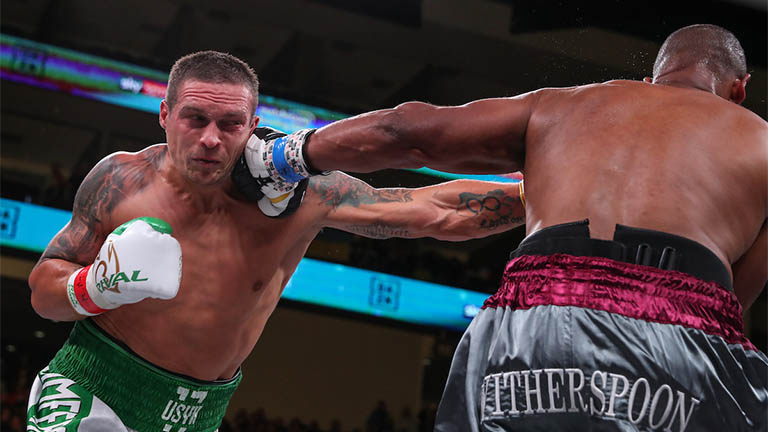 Oleksandr Usyk isn't looking to wait around in the heavyweight division, and Dmitry Bivol dreams of unfication fights in 2020

HE showed no fear of challenges at cruiserweight and there’s no reason to believe Oleksandr Usyk will be any different now he campaigns as a heavyweight.

The early signs are good. His first fight at the weight, a seventh-round stoppage of late replacement Chazz Witherspoon, wasn’t the toughest but Usyk, 17-0 (13), followed it by signalling his ambition to become world heavyweight champion as soon as possible. He has then then made it clear he wants to be in Saudi Arabia on December 7, the night Andy Ruiz Jnr and Anthony Joshua contest the WBA, IBF and WBO world heavyweight titles, and that he wants to capitalise on his number one ranking with the WBO and take a title fight next.

Forget the bedding-in process. Usyk, at 32, feels he is as ready as he’s ever going to be.

“He will be out in Saudi Arabia to watch that fight,” Eddie Hearn, Usyk’s co-promoter, told Sky Sports. “The instructions to me are: ‘World heavyweight championship next.’

“It wouldn’t hurt to have one more, but they say, ‘We have won every belt at cruiserweight, we have had our heavyweight warm-up, we are ready.’

“My message is straight to the world title.”

Don’t get too excited, though. Just because Usyk will be ringside in Saudi Arabia on December 7, and just because he is number one with the WBO, doesn’t necessarily mean he will fight the winner of Ruiz vs. Joshua II in his next fight. No, more likely is it that the winner of that fight is forced to dump one of their titles and the WBO belt, with Usyk lurking, could be the most appealing of the three to relinquish.

It won’t be happening anytime soon, but Dmitry Bivol, the WBA light-heavyweight champion, has expressed an eagerness to fight in the UK in the future and says a showdown against fast-rising British prospect Joshua Buatsi could be the key to doing just that.

Buatsi, 26, fights Blake Caparello at Manchester Arena next month in an eliminator for the right to meet Bivol next year and the Russian, 28, who easily outboxed Lenin Castillo last weekend, welcomes the challenge.

Asked about the possibility of fighting Buatsi, 12-0 (10), in the UK, Bivol told iFL TV: “Yeah, why not? It’s a good fight. I know he is famous in the UK. I have been there in the UK and I like UK fans, because they love boxing.

“He is a good fighter, a bronze medallist at the Olympic games. If he was mandatory, I would give him a chance.

Before Buatsi arrives on his radar, Bivol, 17-0 (11), will keep a close eye on tonight’s IBF and WBC unification title fight between fellow Russian Artur Beterbiev and Ukraine’s Oleksandr Gvozdyk. That’s a fight many believe could take ‘Fight of the Year’ honours and it could, if unification truly is the name of the game, decide Bivol’s next opponent.