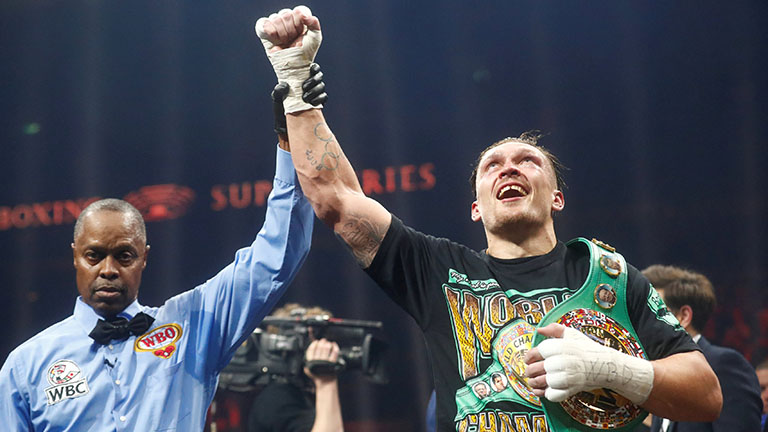 If Tony Bellew is to fight again, it will likely be against Oleksandr Usyk, plus further comings and goings ahead of the July 28 PPV show at the O2 Arena

IMAGINE that. Oleksandr Usyk, the Ukrainian who rounded up and unified an entire division in just 15 fights, winning every single one of the four (how stupid) cruiserweight belts available, is manoeuvring his way into a pay-per-view super-fight simply by being really, really good at boxing.

He’s not talking all that much, seemingly hates no one, and is also unwilling to become embroiled in a phoney rivalry to make money in some kind of bizarre business arrangement-cum-anti-climactic prizefight. Instead, Usyk is saying all the right things at the right time and, more importantly, doing things – like boxing, like winning – better than anyone else.

Thanks to this novel approach, a future fight against Tony Bellew, once played down by Bellew’s promoter, now seems a distinct possibility.

“I said I wouldn’t let him fight Usyk for a third of what he got to fight (David) Haye,” said Eddie Hearn, Bellew’s promoter, on Sunday. “The numbers moved a little last night. I think we have a great chance of making this.

“I spoke to Tony on Saturday night and he made his intentions very clear. I also reached out to Usyk’s team and we will continue the dialogue this week.”

Boxing News understands Bellew, if he’s to fight again, will now only entertain a fight against Usyk. After Saturday, it’s the one that he wants (ooh-ooh-ooh, honey).

That’s great news, not only for Usyk and Bellew, a couple of natural cruiserweights who deserve to make heavyweight money together, but also the rest of us, those sick and tired of mutton dressed as lamb.

Usyk, whether he gets the fight or not, won’t change. He shouldn’t need to, either. Because just like Vasyl Lomachenko, his countryman, and just like Gennady Golovkin, another whose performances work as his USP, Usyk is well on his way to becoming a cult hero, if not an immediate superstar, who will earn riches because of his brilliance and his ability to kick everyone’s arse.

If his tweets are to be believed (and, let’s face it, why wouldn’t you trust the inane chit-chat of someone restricted to 240 characters on a social media platform primarily designed to self-promote), Dave Allen could be about to embark on his final journey to the ring this Saturday (July 28) at London’s O2 Arena.

The popular heavyweight has been booked for a late-notice appointment against fellow Brit Nick Webb, just five weeks after being stopped in 10 rounds by Tony Yoka in France. The fight, chucked on to a pay-per-view event in need of a little help, offers Allen and Webb the chance to impress on a big platform. It also acts as an eliminator for the British heavyweight title, something that will mean more to Webb, the one carrying on, than Allen.

“As soon as I saw Dave calling me out on Twitter I told my manager to get the fight made,” said Webb. “It has been made at short notice but I’m always in the gym and I’m always ready to fight. I’ve been out of the ring for a while now and I’m promising a big performance on Saturday.

“Dave is a fighting man and always takes it to his opponents, so I’m expecting a war. He’s as tough as they come but if I connect cleanly with anyone, it’s lights out for them. A win on such a huge platform against a popular fighter like Allen will really catapult my name to the top of the heavyweight mix.

“Everyone knows Dave, and everyone loves him. I like him too. But this is business and on Saturday I’ll show him what I’m all about. We are competitors and I’m there to take him out.”

Webb is undefeated in 12 fights but has yet to beat anybody of note. In fact, the only time a fight of his attracted interest was when he was scheduled to box fellow prospect Nathan Gorman in 2017. Alas, that fight never materialised and Webb, clearly talented, is still in need of a stern test as a pro.

“I saw Eddie (Hearn, promoter) offered Joe Joyce to fight Nick Webb, and then my name was mentioned in an interview – if that fight was off – so I sent Eddie a message straight away,” said Allen. “Who wouldn’t want to be part of another big pay-per-view show? I’ve been involved in a few now and I couldn’t say no when I knew there was an option to fight on this card.

“He’s a big, strong man who can punch, with a good amateur pedigree. He seems a nice guy. This is nothing personal, it’s just another big fight. He’ll be looking at this to kickstart his career on to the big scene. It’s an evenly matched fight but one I know I can win.

“Webb’s always in training. I follow him on social media so we’re on a level playing field with the short notice. If it comes down to who wants it more, there’s only one winner and that’s me. It’ll come down to a battle of strength, toughness and who takes the better shot, and I think that’s me. I’ve got the experience going in to these big nights and that’ll make up for some of the attributes I may be lacking.

“Win, lose or draw, this is going to be my last fight for a while. People might say that’s not the best thing to say before a big fight, but it’ll help drive that extra 10% out of me. I’ve been in some good, hard fights in recent years and I think it’s time to rest up and revitalise myself.”

Last fight for a while, he says. Isn’t that the nature of every retirement in boxing?

The main reason why Nick Webb vs. Dave Allen has been rushed through and signed is because Brandon Cook, an unfortunate Canadian who now finds himself stuck in England, has twice seen opponents pull out on him ahead of a scheduled appearance on the July 28 card.

First it was Kell Brook and then today he found out Sam Eggington, Brook’s replacement, has also declared himself unfit to compete on Saturday night at the O2 Arena. The reason? A cut picked up in a final sparring session.

This withdrawal marks a horrible turn of events for Cook and it’s hard not to feel sorry for a man whose family and friends were also set to join him in London. There’s talk of the Eggington fight being rearranged for September, but that’s presumably scant consolation at this stage.

Still, at least the weather’s good.