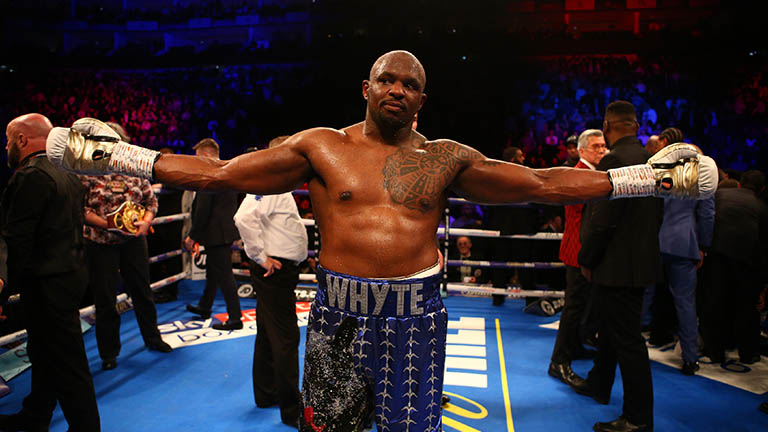 It's been a bad week for boxing and the abolitionists are again out in force, while Dillian Whyte speaks out against accusations and Hughie Fury makes moves

THE sad news about the death of Argentina’s Hugo Santillan (19-6-2, 8 KOs) was the second sobering reminder in the space of a week of just how dangerous boxing can be and why people who break the rules should be dealt with harshly. The 23-year-old died last night after sustaining injuries against Eduardo Javier Abreu (10-1-1, 6 early) in a split draw that took place in Buenos Aires on Wednesday.

Santillan fainted post-fight and was rushed to hospital, where he fell into a coma, never woke up, and became the second fatality in a bad week for the sport. “Upon admission to the hospital, he had successive kidney failure and he did not come out of his coma,” stated Dr Graciela Olocco of Hospital Agudos San Felipe. “He had swelling of his brain and he never recovered consciousness. The swelling continued to worsen and it affected the functioning of the rest of his organs.”

The news was met with some calls to ban the sport — one person has started a Change.org petition, although at the time of writing he was the only person who has signed it — with the “arguments” for a ban once again being either non-existent or poorly put together. It is a fundamentally flawed position born out of the ignorant  “I don’t like this, it should be banned” mind-set that prevails in society.

There is more, as the Gambling Act 2005 S.6 Part 3, Sport Governing Bodies has the BBBoC among the likes of the FA when listing the U.K.’s Sport Governing Bodies. The Board were inserted via a Statutory Instrument (SI 2007/2101, art 2(b) in July 2007), so they were passed into the hierarchy of British sporting bodies. A sure sign that, in the eyes of the lawmakers, it is an official sporting body and consequently boxing is an official sport — albeit one that divides opinion.

In that final one it was concluded that: ‘Is the House aware of the distinguished membership of the British Boxing Board of Control?  It includes two hon. Members—the hon. Member for Stalybridge and Hyde and my hon. Friend the Member for Falmouth and Camborne (Mr. Coe).  How could it include more distinguished sportsmen? They are not going to stand by with others on that distinguished board and see people mutilated wantonly — and they will not. There is no doubt that boxing is a fine, well-supervised sport. This House would do ill even to contemplate abolishing it.’

Furthermore, a case that mentions boxing and the issue of consent was seen before the House of Lords. Over the course of a decade, from 1978 onwards, a group of men consented to sadomasochistic acts, ‘including genital torture’, for the ‘the sexual pleasure which it engendered in the giving and receiving of pain’ (R v Brown and other appeals [1993] 2 All ER 75), and the encounters were recorded and shared among the group.

Initially, they were tried for assault on the basis of actual body harm and unlawful wounding descriptions taken from s.47 of the Offences against the Person Act 1861 and they pleaded guilty after the judge argued that the consent of the “victims” did not make for a viable defence as s.20 of the act stated that: ‘Whosoever shall unlawfully and maliciously wound or inflict any grievous bodily harm upon any other person, either with or without any weapon or instrument, shall be guilty of [an offence] … and shall be liable [to a maximum penalty of five years’ imprisonment].’

However, it was later argued on appeal that: ‘Even when violence is intentionally inflicted and results in actual bodily harm, wounding or serious bodily harm the accused is entitled to be acquitted if the injury was a foreseeable incident of a lawful activity in which the person injured was participating. Surgery involves intentional violence resulting in actual or sometimes serious bodily harm but surgery is a lawful activity.’

Other harmful pursuits were mentioned, namely: ritual circumcision, tattooing, piercing and boxing — all described as ‘lawful activities’.  The key is the word ‘boxing’, which is far removed from prize fighting or bareknuckle boxing and was clarified in Reg. v. Orton: ‘’The true view is, I think, that a blow struck in anger, or which is likely or is intended to do corporal hurt, is an assault, but that a blow struck in sport, and not likely, nor intended to cause bodily harm, is not an assault…nor does boxing with gloves in the ordinary way, and not with the ferocity and severe punishment to the boxers deposed to in Reg. v. Orton’’ (C/O Edward Grayson, ‘Boxing Clever’, 142 NLJ 48, 17 January 1992).

That said, the sport is currently doing itself absolutely no favours as high-profile cases such as the Dillian Whyte (26-1, 18 KOs) one undermine the argument that boxing has been made as safe as it can get. Last night, it was revealed by Thomas Hauser, who initially broke the story, that Whyte’s positive A sample had returned traces of epimethandienone and hydroxymethandienon, two metabolites of the anabolic steroid Dianabol.

Hauser revealed that the traces are small, but they are still there so Whyte’s team and the BBBoC, who let the fight go ahead without notifying Oscar Rivas (26-1, 18 early), have hardly covered themselves in glory. Are fighters going to flock to the UK knowing that this is the level of care they will be given?

Eddie Hearn argued that the decision to go ahead with the fight was justified, telling iFL that: “Dillian Whyte was cleared by (a) panel to take part in this fight. That is really important because people think this news came in and was brushed under the carpet and no-one knew about it. No. A process was adhered to. A (Board) hearing was had. He was confirmed and cleared to take part in this fight…Give Dillian Whyte his time to address the situation, make his statement. Wait for the facts and make a judgement.”

Whyte released a statement on Twitter today outlining his position: ‘I am so disappointed with the rubbish that has been said about me over the last few days. I have lawyers dealing with it and I have been told that I can’t talk about it for good legal reasons. I was cleared to fight and I won that fight fair and square. Thanks for the support.’

Whyte has every right to fight his corner, and fully intends to do so, yet in the midst of all this, and pardon me if I missed it, surely an apology should have been issued to Rivas? Notifying him of the positive test result may not be mandated in the rules, nevertheless it is basic etiquette and would have given Rivas a big decision to make.

The WBC have also entered the fray yesterday, stating that: ‘At the time of the publication of this Release, the WBC has not received any notification from anyone about a positive anti-doping test allegedly yielded by Dillian Whyte in connection with last Saturday’s fight against Oscar Rivas for the WBC Interim Heavyweight Championship.

‘The WBC has requested that the BBBofC, as the local, governing entity that oversaw that fight, formally provide any available information to the WBC. The fight’s promoters contracted the Voluntary Anti-Doping Association (VADA) to perform pre-fight and after-the-fight anti-doping tests on both fighters.

‘The WBC is not aware that any of the test’s results VADA has received up to now have yielded any adverse findings. The WBC created the Clean Boxing Program which is administered by VADA, and which is a top priority of our organization. The WBC will not make any comments about the situation at hand until it receives the proper, formal communication from the BBBofC.’

The whole thing is a mess, a moral and inevitably legal quagmire. Still, there is some support for Whyte among fans and he has received some heavyweight backing from two-time cheat Jarrell “Big Baby” Miller (23-0-1, 20 KOs), who was done for using Methylhexaneamine in 2012, a two year ban, and then was caught out again this year when a cocktail of GW1516 plus EPO and HGH was found in his blood.

The New Yorker blamed the first bust on misuse of an over the counter supplement and said the second one was down to another tainted supplement plus stem-cell treatment on an injured elbow. Naturally, Miller had nothing but words of support for Whyte.

“I know with the whole Dillian Whyte situation, they blasted me when my whole news came out and had a lot to say,” he told The Sun. “I honestly ain’t got nothing bad to say about Dillian Whyte. He’s a good dude, he’s a brother, he’s funny, he’s a warrior and in this sport of boxing things happen.”

Hughie Fury (23-2, 13 KOs) has been flying under the radar, which is how his father and trainer, Peter, wanted it yet he will now enjoy a higher profile after joining Matchroom. He has signed a multi-fight deal and will announce the first opponent next week.

“I’m over the moon to be signing promotionally with Eddie,” said Fury via a press release. “I feel with Matchroom’s backing I can kick on now and really fulfil my potential. Watch this space because it’ll be exciting times over the next couple of years.”

“People forget he’s still only 24 years old — a baby for a heavyweight,” added Peter. “Signing with Matchroom gives him to perfect platform to achieve his goal of rising to the top of the heavyweight division and I have complete confidence in him doing just that.”

“At such a young age Hughie has been fearless taking on the World’s contenders, facing Joseph Parker for the World title at just 23 and recently travelling to Bulgaria to take on Kubrat Pulev in his back yard,” said Hearn, drawing a line under what has been quite a week for the promoter.