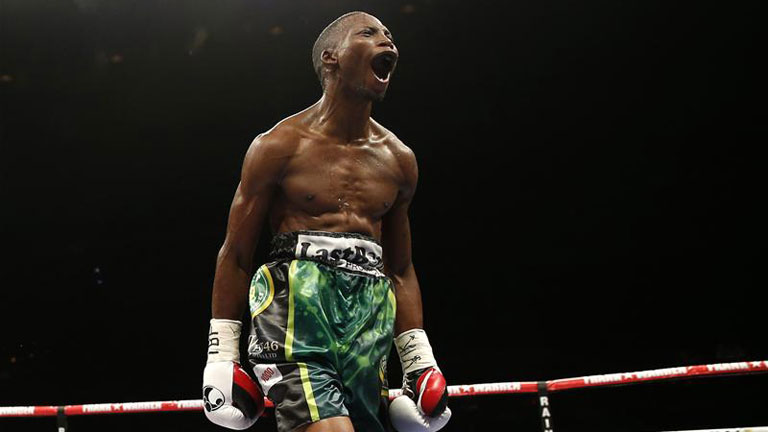 Bantamweight champion Zolani Tete heads to Las Vegas to join the Mayweather team, while Shakur Stevenson has Josh Warrington and Lee Selby in his sights

WBO world bantamweight champion Zolani ‘Last Born’ Tete is hooking up with trainer Floyd Mayweather Senior and will now be based in Las Vegas.

The move, an attempt to freshen up the South African and keep him learning ahead of some potentially tricky fights in the World Boxing Super Series’ (WBSS) bantamweight tournament, was confirmed by Tete’s manager Mlandeli Tengimfene after the 30-year-old outpointed Mikhail Aloyan in Russia on Saturday (October 13).

“Zolani was supposed to have joined the top-of-the-range Mayweather Gym of Floyd Junior in Las Vegas before the fight against Mikhail,” Tengimfene told Sowetan Live. “But I wanted somebody who has amateur background, so I put the move on ice.”

“But, going forward, since we could meet the winner between Ryan Burnett [WBA champion] and Nonito Donaire in the semi-final, Zolani will be trained by Mayweather Senior,” said Tengimfene.

“You need somebody with lots of experience. Mayweather has been there, done it all. The old man has accepted training Zolani and this is what Zolani wants.”

Mayweather, the 65-year-old father of Floyd ‘Money’ Mayweather, was in Russia at the weekend guiding his cruiserweight, Andrew Tabiti, to victory over Ruslan Fayfer. Tabiti, like Tete, will now take his place in a WBSS semi-final.

It will be interesting to see what new dimensions Mayweather can add to Tete’s game, but one thing’s for sure: based on Tete’s last two performances, routine but uninspired decision wins against Omar Narvaez and Mikhail Aloyan, the hard-hitting South African could probably do with a sprucing up.

It’s assumed blue-chip American prospect Shakur Stevenson will one day fight Ireland’s Michael Conlan in what will be a fascinating battle of young and charismatic featherweights.

However, Stevenson, fresh from a stunning first-round stoppage of Viorel Simion on Saturday (October 13), isn’t just gunning for Conlan. There are, in fact, a couple of other UK-based featherweights-cum-super-featherweights on his radar not named Conlan.

“You can give me Lee Selby next,” the 2016 Olympic silver medallist told Bernardo Osuna of ESPN after his latest win, his ninth as a pro.

It’s worth remembering Selby hasn’t boxed since relinquishing his IBF featherweight title against Josh Warrington in May and was said to be considering a move to either super-featherweight or lightweight. As for Warrington, a big ticket-seller in Leeds, he’s preparing for a December 22 showdown against Belfast’s former world champion Carl Frampton at the Manchester Arena.

Stevenson, 9-0 (5), presumably knows this, of course. He also knows Viorel Simion, the opponent he blitzed on Saturday, managed to go 12 rounds with Selby in 2013 and 12 rounds with Scott Quigg last year.

That Stevenson managed to halt the Romanian in the very first round – becoming the first man to do so – suggests he’s not only a youngster to watch but perhaps one who can be fast-tracked.

“It felt great,” he said. “He went 12 rounds with Lee Selby, he beat Scott Quigg for five rounds, and he ain’t make it out of the first round with me.

Whether his breakout year involves the likes of Warrington and Selby or not, it’s tough to argue.