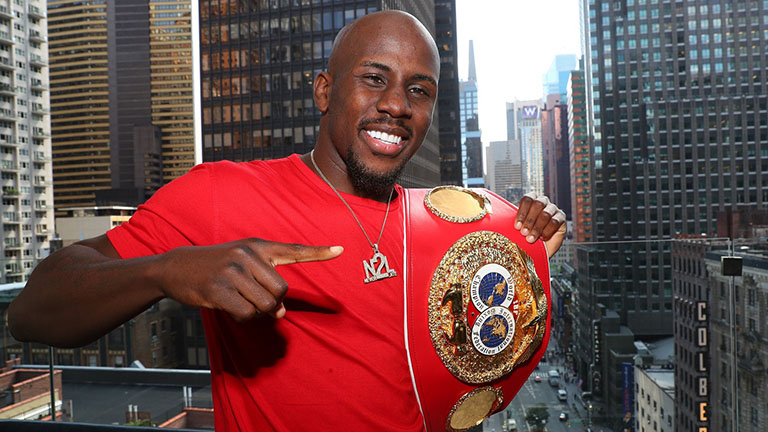 Tevin Farmer and James Tennyson clash this weekend for the IBF title but have even bigger fights on the horizon, while Lee Selby eyes lightweight return

JAMES TENNYSON and Tevin Farmer both have business to attend to this Saturday (October 20) in Boston, when they clash for Farmer’s IBF super-featherweight crown, but that hasn’t stopped either of them dreaming of bigger and better things in the future.

Tennyson, 22-2 (18), the underdog with it all to do, has his sights set on an all-Belfast world title clash with former two-weight world champion Carl Frampton, while Farmer, 26-4-1 (5), seems to fancy the idea of sharing a ring with current WBA super-featherweight champion Gervonta Davis.

“Carl has always said that he would love to be a three-weight world champion so just imagine if James wins and he faces Carl at Windsor Park next summer. It would be huge,” Tennyson’s manager Mark Dunlop told the Belfast Telegraph.

At this stage, it’s purely manager talk. Tennyson, no fool, is aware of the size of the task facing him at the Boston Garden this weekend and has probably yet to even entertain the possibility of fighting Frampton next year. Besides, Frampton must first dethrone a buoyant Josh Warrington on December 22, when the pair meet for the Leeds man’s IBF featherweight title.

Farmer, on the other hand, the champion favoured to beat Tennyson this weekend, is clearly happy to discuss other future opponents.

“I have a big fight on Saturday and I’m not overlooking James,” said Farmer. “You don’t get to this level for no reason and I know he’s going to come to fight and try to beat me, but that’s not going to be easy – he needs to make sure he brings his A-game.

“I want to fight Gervonta Davis. I have a title, I have a great contract, so I don’t need him – but I have to have that fight. There’s been a lot of talking but I am about handling business. We’ve talked enough. I want the fight, so let’s make it happen.

“There’s no more ‘get a title’ talk. There’s millions of dollars in that fight and it can be made. It’s one of the biggest fights in boxing. I don’t have to chase anyone. I’m the money out there now. Get your ticket and I’ll pick it.

“The best want to fight the best and it’s got to happen. I am a fighter, that’s all I want. Let’s leave the streets on the streets and do the fighting in the ring.”

If James Tennyson’s previous form is anything to go by, Tevin Farmer might have a bit of a street fight on his hands this Saturday night.

We knew Lee Selby wasn’t going to stick around at featherweight much longer. This was clear the moment he struggled to produce his usual magic against Josh Warrington at Elland Road in May.

What we didn’t know, however, was that Selby, no longer the IBF featherweight champion, would eventually decide to jump not one but two weight classes in order to rediscover his old form.

That’s the message coming out of the Welshman’s camp ahead of a proposed December return, and Selby feels it’s a decision that makes perfect sense at this stage in his 10-year pro career.

Speaking to Sky Sports, the 31-year-old said: “It was a massive struggle for me to get my big frame down to the nine-stone featherweight limit.

“Even super-feather was only a four-pound difference and I didn’t think that gain would benefit me too much. Lightweight is my natural weight and I am ready to show just that.

“When I’m at the gym, sparring at my natural weight, I’m known as a big puncher. As soon as I start losing the weight and go below ten-stone, the power decreases. Now, I will show my power.

“I had to stay at 126 pounds to defend my title. I’d never vacate a title after working so hard to get it. That would just feel like quitting.

“Really, I should have moved up as far back as 2012 after I won the British outright. That’s when the stoppages stopped. I had outgrown the division and had no power. I didn’t complain and just carried on making weight.”

The addition of Selby, 26-2 (9), to the lightweight division is a welcome one. Domestically, in particular, he could find himself involved in some fascinating fights in 2019.

“I want to be in with the top fighters,” he said. “The biggest names we have in the UK at lightweight are [Anthony] Crolla, maybe [Ricky] Burns and [Luke] Campbell. I’d love to get straight in the mix with them now.

“I sparred with Burns before his [Terence] Crawford defence, it was great, and Crolla would be perfect. I had feedback that I’d be too small and lack power, but I’ve been in with these guys sparring and I’m the bigger man.

“I just want big fights, either domestic or internationally. I’m ready to get straight in there.

“I’m waiting on my manager to confirm details, but I will be returning in December. I’d like any title shot or an eliminator.

“[Vasyl] Lomachenko and [Mikey] Garcia have the belts tied up at the minute and I’d happily take them on – of course I would. If you’re not willing to be in with the best, you shouldn’t be fighting.”

Lee Selby might not have a title to his name these days, but the hunger, it would seem, remains as strong as ever.