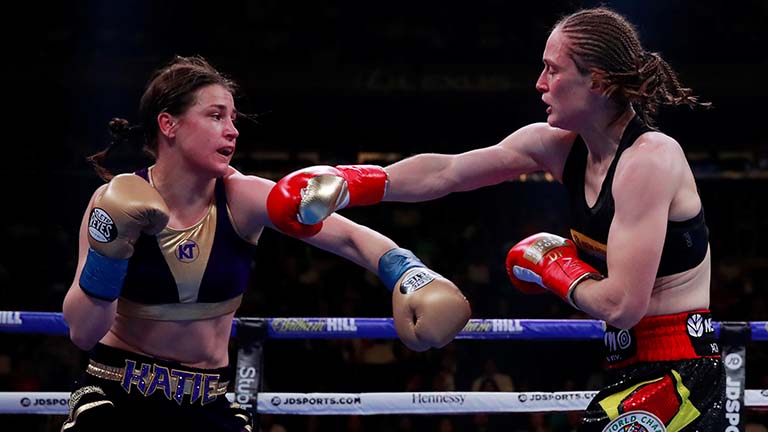 Katie Taylor has a couple of options in mind for later this year, and Clarence 'Bones' Adams is impressed by Amir Khan's work ethic

KATIE Taylor is set to return to the ring in either October or November, against either Delfine Persoon or Amanda Serrano. The Irish star doesn’t know much more than that at this stage but is adamant her next fight, whether in October or November, will be a tough, meaningful one.

In the case of Persoon, that’s as good as guaranteed. After all, last month in New York, Taylor and the Belgian traded punches for 10 frenetic rounds in what was perhaps the female fight of the year. Taylor just about managed to remain undefeated and add Persoon’s WBC title to her WBA, IBF and WBO versions, but the decision was a close, controversial one, and left many, including Persoon, begging for a rematch.

Puerto Rico’s Serrano, meanwhile, is a world champion in seven weight classes who currently owns the WBO title at super-lightweight and, incredibly, the WBO belt at super-flyweight.

“Obviously, Amanda Serrano is the obvious choice, as well as Delfine Persoon.

“I can’t wait for that rematch. It was such a great fight last time round and I think the next fight between me and her is going to be even more special. There’s a lot more interest round that as well.

“It’s those kind of fights that really take women’s boxing to the next level and to have so many people talking about the fight is incredible.

“It was great to pull through and hold all the belts at the end. It is really the pinnacle of the sport.”

Taylor, 33, has achieved a great deal in her 14 pro fights. Fourteen wins and four world titles is no meant feat, particularly when married with her equally brilliant amateur achievements. Yet, given her drive and ambition, it’s safe to say the Bray hero is far from finished.

Amir Khan has seemingly always wanted to be Floyd Mayweather in some way, shape or form. Either that or fight him.

Now, days away from a bizarre fight in Saudi Arabia against Billy Dib, Khan’s new trainer, Clarence ‘Bones’ Adams, says the two-time world champion is getting closer and closer to emulating Mayweather – at least in terms of his training regime.

“Amir has the ability and he wants to work,” said Adams, a former WBA super-bantamweight champion now training fighters in Las Vegas. “Once I lost that will to work, I retired.

“Amir puts in the effort of a broke 26-year-old and that’s all you can ask for as a trainer.

“It’s very rare to have that amount of money and still be hungry. I take my hat off to him.

“He’s like Floyd Mayweather in that respect. People don’t realise how hard Floyd still trains despite being so wealthy.

“Floyd still does five-hour sessions, getting through two or three shirts. People don’t realise how hard he works. The more money he gets, the harder he works. And I see that in Amir.”

Some believed one of the reasons Virgil Hunter, Khan’s last coach, wanted no more to do with the Bolton fighter was because of his dwindling work ethic and his propensity to get distracted. But this, Adams believes, is simply not the case.

In fact, Adams, someone previously involved with Nonito Donaire and Jorge Linares, would love nothing more than to train Khan for a mooted November 9 superfight against Manny Pacquiao (providing both Khan and Pacquiao come through their next fights unscathed).

“He wants to learn and, of course, it takes a whole lot of time for all that to work,” said Adams.

“We have plans for after this fight to get back in the gym, work on good habits and get rid of bad habits.

“It would be awesome to be in his corner for the Pacquiao fight. A great honour.

“I wish I had got Amir years ago, but he’s only 32 and I see his drive in the gym. He’s working harder than ever.

“If I can add some more boxing knowledge and theory then he can add a good few years to his career.

“He’s not done yet. He could win another world title and, with all the things he has achieved, that would just be a bonus.”