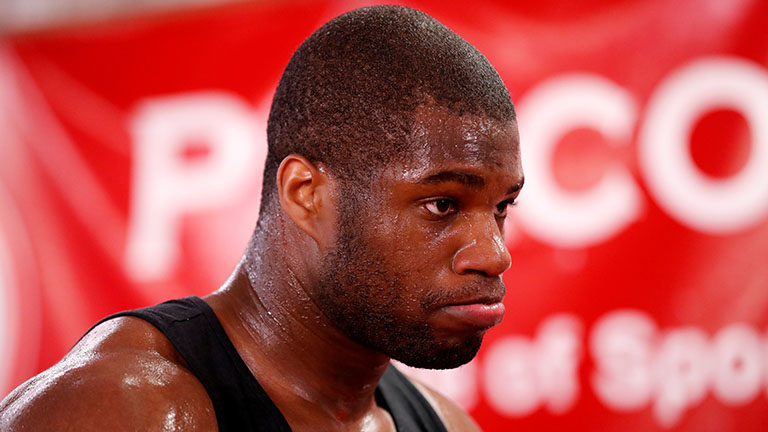 Seems like there's no stopping Tyson Fury vs. Otto Wallin getting made, and Daniel Dubois gets an unknown Ghanaian for fight number 13

THE lineal heavyweight title was supposed to restore a bit of integrity and clarity to a division flooded by alphabet titles. It was meant to narrow it all down to just one champion. It was meant to make the whole picture clearer, easier to understand.

Yet, in the hands of Tyson Fury, it has done nothing of the sort.

Instead, what seems to have happened it that the lineal heavyweight title has become little more than an invisible stick with which Fury can beat the other champions, the ones in possession of actual belts, as well as a label attached to fights void of relevance.

The same then applied to his December fight against Deontay Wilder, when Wilder’s WBC heavyweight belt – an actual belt – was apparently counteracted by Fury’s imaginary one. That was a fantastic fight, both on paper and in reality, but Fury’s next one, a simple two-round win against unknown German Tom Schwarz, was quite the opposite and a mooted fight between Fury and Sweden’s Otto Wallin, reportedly set for September 14 in Las Vegas, is not much better.

Unfortunately, this latest fight, like the ones against Schwarz, Seferi and Pianeta, only gives credence to the belief that Fury isn’t so much using his lineal heavyweight champion status to lead the way as he is using it to hide behind.

“What’s not to like?” Fury told Complex.com back in June, before the Schwarz fight, when asked about his blockbuster deal with ESPN. “I get paid $100 million to have fun basically.”

It’s fun for Fury, yes, but not for anyone else. Not at this stage anyway, a year on from the big comeback fight against Seferi and all the fun he had there. In fact, now’s the time to probably get serious, the fun no longer funny. We know he’s ready for it, too, because he appears in good shape, both mentally and physically, and because he was agonisingly close to dethroning Deontay Wilder, perhaps the most dangerous heavyweight on the planet, just eight months ago.

So why, then, must we still endure fights against opponents like Schwarz and Wallin? What does it prove? What does any of it mean? When will it end?

Chances are, if asked these questions, Fury and his team will use the words “showcase” and “American audience” and “TV platform” and will remind us that a rematch with Wilder is bound to happen sometime early next year. They will stress the need to remain patient and to both see and believe in the bigger picture.

But no amount of explaining makes the Fury roadshow any less frustrating.

“He keeps pulling out all these night shift graveyard workers… Bulls*** at its best,” Wilder said when news of Wallin getting the gig spread online. “No Englishman’s coming over here and saving America with Tom Schwarz and Otto whoever he is, talking about how he’s the best with an invisible belt.”

You better believe Fury will, though. And in the shape of Wallin, he will have the ideal opponent to flaunt his wares and then, in the post-fight interview, again emphasise that he is the lineal heavyweight champion and therefore above the belts held by Wilder and Andy Ruiz Jnr, the two champions in the division. Wilder, Ruiz and the rest can shake their heads as much as they like but until the roadshow is stopped it will invariably keep on rolling.

Wallin, the latest support act, is undefeated in 21 pro fights (including a no-contest), winning 13 via knockout, and ranked at four by the WBA and 11 by the IBF, even if recognisable names on his record are hard to come by.

So far he has beaten Irineu Beato Costa Junior (who has lost to Dillian Whyte, David Price and Joseph Parker) and Raphael Zumbano (who has lost to Anthony Joshua and Andy Ruiz Jnr), and last year picked up a European Union heavyweight title – not even the full European heavyweight title – when defeating countryman Adrian Granat over 12 rounds in Sweden. But that’s as good as it gets.

There was an American debut earlier this year, yet even that ended in disappointment when Nick Kisner, the chosen opponent, was cut in the opening round and the fight was declared a no-contest. Wallin’s misery was then compounded when his next opponent, cruiserweight BJ Flores, was declared not “medically cleared to compete” just days before their scheduled bout in July.

Still, by remaining unbeaten and shirking as many competitive fights as possible, a patient heavyweight can be sure of an opportunity just around the corner and Wallin, a six-foot-five southpaw whose stance is his biggest threat, is no different.

“I am very optimistic that the fight will be made,” Dmitriy Salita, Wallin’s promoter, told Sky Sports last Friday. “Once it is, an announcement will be coming from Top Rank.”

If only Salita’s optimism regarding the fight being made was matched by the optimism of fans hoping for a competitive next outing for Fury. If only.

In boxing, you can be sure that whenever there’s bad news there will always be something worse around the corner to soften the blow. And in the case of Daniel Dubois’ next opponent, this theory holds up.

To save you the job of googling, this is the man in question. To save you making your mind up, yes, Ebeneezer Tetteh would appear to be worse than Otto Wallin – much worse.

The September 27 show at the Royal Albert Hall is being billed as “Every Belt” and, if the sole purpose of Dubois vs. Tetteh is to add the Commonwealth strap to the British belt Dubois picked up against Gorman, that’s fair enough. You could even argue it’s the next logical step and that Dubois, as a 21-year-old domestic champion, is entitled to go after every belt before embarking on his move up the ladder. If that way inclined, good for him.

The problem, however, is that when you strip away the title and how the stats appear on a poster (a combined 32 fights unbeaten) to analyse Dubois vs. Tetteh as an actual fight, it is not remotely as attractive naked as it is in clothing.

Tetteh, for example, may have won all of his 19 pro fights to date, ending 16 of them within the distance, but has still to fight outside Accra, let alone Africa. Some might say he’s biding his time, perhaps waiting for his breakout moment, yet anyone with access to YouTube will come to understand Tettah’s reluctance to leave home probably has more to do with a greater desire to protect his undefeated record.

Regrettably, the 31-year-old appears novice-like to even the untrained eye and boasts not a single win on his record worth mentioning. (The combined record of his previous opponents reads 119-185-3.) Many of his fights, in fact, have taken place in gymnasiums and school halls, at least one has seen Tetteh benefit from bizarre officiating, and the quality of the boxing, both on the part of Tetteh and his opponents, often seems no better than what you might find on the UK’s white-collar circuit.

His countryman, Richard Lartey, was swatted in four rounds by Dubois earlier this year and possessed a similar record and reticence to travelling. Lartey, though, had at least boxed in Europe and tested himself before staring down Dubois’ barrel. No such luck with Tetteh, I’m afraid.

The positive for Dubois, I suppose, is that he is being kept busy and will be able to continue the momentum he gained with that scintillating performance against Gorman. At 21, he is a baby in heavyweight boxing terms and there is no need to rush. A jump in class is his to make and will be triggered only when he’s good and ready.

But the real shame here is that even if Dubois does run through Tetteh in impressive style, and he will, it is going to mean very little to the people watching it and even less to those who deem it worthy of avoiding altogether. The presence of a Commonwealth title won’t make it any less pointless.