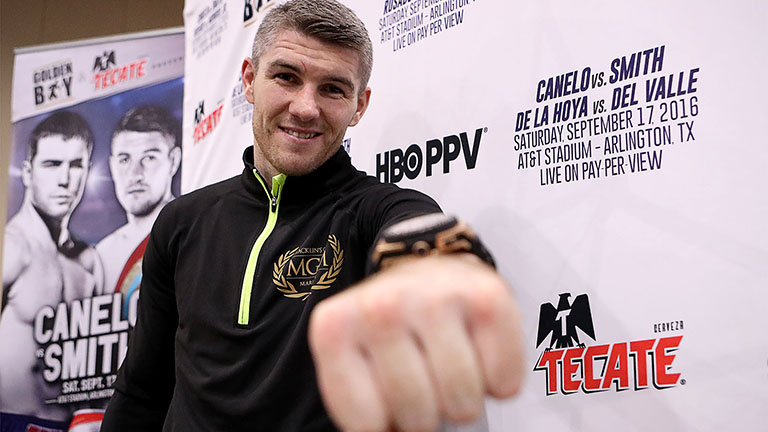 Liam Smith expects a war against Sam Eggington in March, while Anthony Yarde expects rounds from Mehdi Amar in February

FORMER sparring partners Liam Smith and Sam Eggington will do it for real when they clash on March 30 at the Echo Arena, Liverpool, it was announced today.

Smith, 26-2-1 (14), a recent signing for Matchroom Sport, has been linked with a fight against fellow junior-middleweight and stablemate Kell Brook, but must first get past Eggington, 23-5 (18), an exciting Brummie desperate to get back in the win column following a stoppage defeat last time out.

“It’s a very good fight for me,” said Smith, the former WBO super-welterweight champion. “I’ve done a lot – and I mean a lot – of sparring with Sam. You know what you are going to get with him. He comes to fight. You aren’t sitting on the edge of your seat wondering what he’s going to bring. You know exactly what he’s bringing.

“It’s the same with me and you know this is going to gel into a good fight. We will meet in the middle (of the ring). It’s what we both do. I do feel, though, I do everything better than him and beyond. I feel if I ‘turn up’, you will all see what I mean.

“I’ve got to do a proper job on Sam and a proper job is what I truly believe I will do. Having those little gloves on are so different to sparring and with those 10oz gloves on, I am massively confident I will find those gaps. Everything I throw will hit Sam and I just feel I have too good a variety for him to carry on going.”

According to a press release, Fitzgerald, 11-0 (8), says he is a “different level” to Fowler’s previous opponents but ‘The Machine’, 9-0 (8), has vowed to “go through” his former teammate to set-up a mouth-watering clash with British Champion Ted Cheeseman.

On the subject of moving up in class, Anthony Yarde, the undefeated London light-heavyweight of whom big things are expected, gets a much-needed test on February 23 in the form of one-time European champion Mehdi Amar.

The fight takes place at the Morningside Arena in Leicester on February 23, live on BT Sport, and sees Yarde showcase his skills in the company of a Frenchman who won the EBU light-heavyweight belt against Serhiy Demchenko in 2015.

Amar, 35-6-2 (16), eventually relinquished that title to former world super-middleweight champion Robert Stieglitz, but that’s not to say he’s a soft touch for a young Briton still making his way in the sport. Nor should the fact he is now 36, and lost on points to Oleksandr Gvozdyk last year, detract from the fact he is a perfectly acceptable, nay, impressive choice of opponent next opponent for Yarde.

Given Yarde’s previous opposition, the choice of Amar almost comes as a surprise. Unlike the rest, he is durable, having only been stopped once (against Nadjib Mohammedi in 2012), and experienced at a level Yarde, 17-0 (16), hopes to one day reach.

“I am aiming for big things this year and it starts here,” stated the 27-year-old.

“Amar possesses all the experience and know-how of operating at a high level, winning European titles and fighting some of the best in the division.

“He proved his durability and toughness by going the full 12 rounds with Gvozdyk and the only other two people to do that did it in six round fights.

“It is the perfect test for me at this stage of my own development and I am looking forward to making a big statement in Leicester.”

Yarde, ranked number one by the WBO, has so far won Southern Area, WBO European and WBO Intercontinental honours as a pro. Not one of those belts, however, nor the opponents he defeated to win them, will mean as much to his progress as his next fight with Amar on February 23.