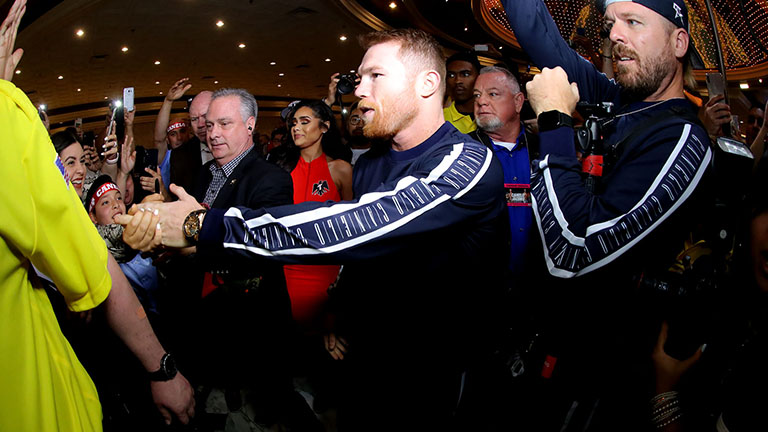 Canelo Alvarez on the matter of loyalty. Terry Dooley rounds up today's Boxing News at Five

CANELO ALVAREZ (52-1-2, 35 KOs) meets Sergey Kovalev (34-3-1, 29 KOs) for the WBO light-heavyweight title at the MGM Grand in Las Vegas on Saturday night and while there has been plenty of mutual respect between the two men there has been very little on display from Alvarez when it comes to his promoter Oscar De La Hoya.

The relationship has been strained since Golden Boy failed to secure an IBF middleweight title defence against Sergiy Derevyanchenko and the subsequent stripping of the title, but Alvarez has taken things a step further by questioning De La Hoya’s loyalty after his promoter posted a negative message on Ryan Garcia’s Instagram seemingly directed towards Canelo’s cornerman Eddy Reynoso.

“Bro, when you duck under, always keep your eye on your opponent. You tell your trainer that,” he is said to have written.

Tyson Fury (29-0-1, 20 early) has responded angrily to Eddie Hearn’s claim that Fury’s move into WWE is a sign that he is done with boxing. Hearn said it means that Fury is “packing up boxing” only for Fury to come roaring back.

“I’ve no comment about it, it’s a load of shit,” he said when speaking to the Manchester Evening News. “I’m not interested in what Eddie Hearn says at all. I’ve no reply. In fact here’s my reply to Eddie Hearn — concentrate on your life and not mine!”

Mexican-American Andy Ruiz (33-1, 22 KOs) is preparing for his December 7 WBA Super World, IBF, WBO and IBO defence against former holder Anthony Joshua (22-1, 21 KOs) in Saudi Arabia. The 30-year-old used a press conference in San Diego to reveal that former world Champion Mike Tyson has told him to be vigilant both inside and outside the ring.

“Meeting Mike Tyson, he was one of the biggest fighters that I always wanted to meet, and once I did he gave me some advice,” he revealed. “He just told me to be careful outside of the ring. Inside of the ring he said I am doing good and all that but just to be careful outside of it. And he said that all the people I hang out with just to be humble and to take it serious.”

In other heavyweight news, former Champion Wladimir Klitschko (64-5, 53 KOs) once again teased a comeback as well as picking Joshua over Fury should the two meet when speaking to Business Insider.

“I still got it,” he said. “Can I fight? Yes. Right now I keep my options open. There is going to be no comeback to come back and to break a jaw. It’s a comeback to break a record. Is it appealing? I would say yeah, it’s pretty cool. George Foreman did it. He was 45 I believe when he became champion, and it’s a pretty cool statement.”

Klitschko has never really seemed to recover from what he perceives as the ignominy of losing to the brash Fury, who really went for it in the pre-fight verbals. He has faced both men and believes that Joshua would prevail if they met due to his commitment to the sport.

“He is getting to be the complete fighter, technically, size-wise, weight-wise, power-wise, and he is a good learner,” he said. “The other guy [is] like a fart in the wind, it is there and it is gone. In the history of boxing there are a lot of examples of this kind of guy. They can be successful for a time but are not disciplined enough to continue to be successful.”

Trainer Shane McGuigan has leapt to Lawrence Okolie’s (14-0, 11 stoppages) defence following his seventh-round win over Yves Ngabu (20-1, 14 early) for the EBU cruiserweight title at the O2 Arena on Saturday night. Okolie was criticised for holding and for having a style that is difficult to watch yet McGuigan has continued to fight his corner, telling Lee Power of the Islington Gazette that: “It wasn’t the cleanest performance from Lawrence, but the guy came to fight and win.

“Lawrence had to dig in deep, but he showed a lot of improvements and he got a knockout which is the most important thing. I want him to fight for a world title, I don’t think we need to risk him against a guy that’s a has-been. Maybe a fringe world level guy such as Mateusz Masternak next, followed by a world title fight.”

He added: “Lawrence is going to be very difficult to beat. I believe he beats everybody in the world at the moment at cruiserweight, and it might not be pretty but he gets the job done.”