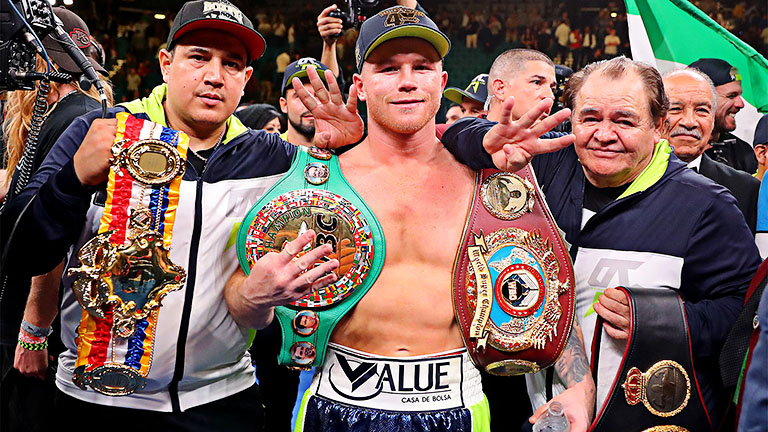 Canelo Alvarez is playing hard to get ahead of Cinco de Mayo outing, and Floyd Mayweather likes the idea of beating up two UFC stars in one night

THE problem with putting your career on hold and essentially begging a superstar champion to fight you is that your desperation is made clear and the eventual offer, because of this, will invariably be some way short of what you had initially hoped for.

So Billy Joe Saunders and Callum Smith have discovered in their endless pursuit of Mexican Saul ‘Canelo’ Alvarez, both the middleweight and light-heavyweight champion and the man of their dreams.

The two super-middleweights from Britain have been shooting Alvarez admiring glances for some time, all the while treading water in their own careers, and now, with May 2 fast approaching, are waiting with bated breath for Alvarez to make up his mind. The longer Alvarez makes them wait, of course, the better it is for him; the more likely it is he will have them dancing to his tune, both in terms of preparation time and purse offer. But a decision soon needs to be made, one way or the other, and Saunders and Smith, Canelo knows, won’t come cheap.

Indeed, both champions have made it clear in recent weeks that should they be rebuffed – as seemed likely not long ago – they would simply join forces and stage their own superfight of sorts back in Britain: Saunders vs. Smith/Smith vs. Saunders.

Canelo, surely aware of this, could now be itching to secure the services of one of them soon rather than later. Either that, or he will remain happy to lowball them and wait for the first one of them to break.

“We turned down the initial offer but, of course, it’s the fight that Callum wants next,” Hearn said to ESPN.com. “If we feel the offer is right, he will jump at the chance.”

Smith isn’t alone in turning down the first offer. Saunders, too, according to Mike Coppinger of The Athletic, also shook his head despairingly upon hearing what Alvarez’s team wanted to pay him for a Cinco de Mayo move-around.

Alas, both the games and the search show no signs of ending just yet.

Although not enough to make either fight an interesting spectacle, the idea of Floyd Mayweather boxing Conor McGregor and Khabib Nurmagomedov on the same day adds a touch – only a touch, mind you – of intrigue to an otherwise unimaginative and pointless concept.

And that could be how Mayweather plays it, according to the man himself, as he figures a way to once again drag a mixed martial artist kicking and screaming into his domain only to then tell them everything but their the use of their hands is prohibited. It could, in fact, be the only way to play it.

Mayweather, after all, been linked with a rematch against McGregor, the two-weight former UFC champion, and a standalone fight against Nurmagomedov, the current UFC lightweight champion, but knows both will be tough to sell given the one-sided nature of his August 2017 shellacking of McGregor in Las Vegas. Which is seemingly why the solution to the problem this: two outboxed martial artists for the price of one.

“I even talked about fighting Khabib and Conor in the same day,” Mayweather told Drink Champs. “Khabib in the day and Conor at night. You pay one fee, probably $250, and you get both fights.”