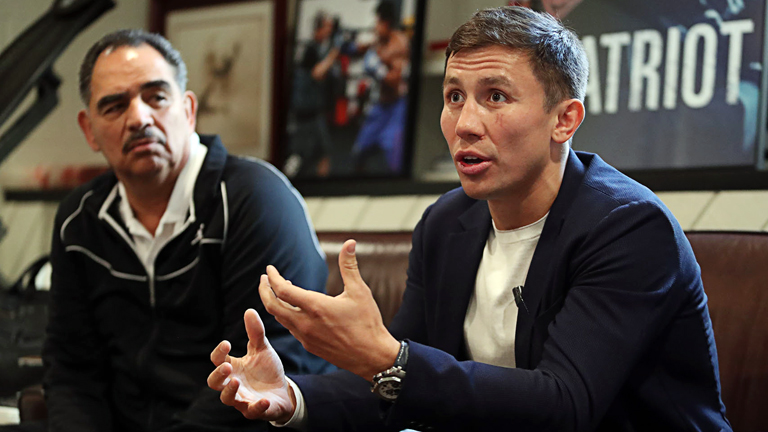 Abel Sanchez has criticised the "honour" and "integrity" of Gennady Golovkin following their split, and Dave Allen is confident he will fight David Price in July

MOST splits in boxing tend to be acrimonious and most, unfortunately, tend to be instigated by greed on either the part of the boxer, the coach, or both.

With money a driving force behind near enough every division made in boxing, this should come as no surprise, no, but it’s a shame nonetheless.

The latest trainer and fighter to part ways under something of a cloud are Gennady Golovkin, the former world middleweight champion, and Abel Sanchez, his California-based coach.

Their separation was announced yesterday (Wednesday, April 24) and sent shockwaves through the boxing world. Seemingly a solid team, from the outside looking in, Golovkin and Sanchez had worked together since April 2010 and most assumed would stick it out for the duration of the Kazakh’s career.

This, however, will not be the case. Golovkin, instead, will announce a new trainer ahead of a scheduled June 8 fight against American Steve Rolls and Sanchez, who also lost heavyweight prospect Joe Joyce last week, will be left to lick his wounds.

Today, in fact, Sanchez issued a statement to Yahoo insisting the split with Golovkin was far from amicable and that – surprise, surprise – money had driven a wedge between them.

“FYI, as of today I will no longer be working with Gennady Golovkin,” said Sanchez. “After a great 9-year run, records set and equalled, developing a Hall of Fame career and making it possible to sign a six-fight, $100 million contract with DAZN, he proposed and insisted on an insulting new trainer compensation schedule. My dignity and honour does not allow me to be screwed like that. It’s unfortunate being greedy, being ungrateful and (having) no ethics, honour or integrity will end this relationship.”

Greedy and ungrateful is perhaps no way to describe a boxer who helped Sanchez make a lot of money but it’s hard for anyone to guess what goes on behind closed doors. Golovkin, for his part, took the more vanilla, safer and sensible approach when constructing his own divorce statement.

“I would like to announce that I have made a major decision for myself and for my career,” he said. “I want to build on what I have already achieved and continue to better myself. Therefore, I will not be training with Abel Sanchez. This was not an easy decision for me and it is not a reflection on Abel’s professional abilities. He is a great trainer, a loyal trainer, and a Hall of Fame trainer.

“I will be announcing my new trainer at a later date. But today, I want to thank Abel for the lessons he taught me in boxing.”

Fair to say this is probably one band that won’t be getting back together.

Popular Doncaster heavyweight Dave Allen has revealed to Boxing News that David Price, the heavy-handed former 2008 Olympic bronze medallist, is the man he expects to oppose on July 20 in London.

Twenty-seven-year-old Allen, fresh from a brilliant third-round knockout of Lucas Browne on Saturday (April 20), returned to training on Monday and is focused on getting out again in the summer. He is using this as an incentive to stay fit and, more than that, believes a win over Price, should the fight get made, leaves him just one additional win away from a world heavyweight title shot.

“The way heavyweight boxing is, if I beat David Price, having just beaten Lucas Browne, I’m only beating a Luis Ortiz or Joseph Parker away from getting a heavyweight title shot. That’s just how the heavyweight division works.

“Don’t get me wrong, I know I’m still a long way off campaigning at the highest level, but I’m going to be beating people there or thereabouts. People can get on at me and say I don’t take it seriously and don’t believe in myself, but, in the next breath, when you tell them you might be fighting for the world heavyweight title in two or three fights, they start calling you delusional. You can’t win really.

“For the first time in my career I’m aiming for the top and I want to be heavyweight champion of the world. I really believe, if I keep improving and keep learning, there’s no reason why I can’t do that.”

There was once a time when opponents feared getting caught by David Price’s booming right hand but Allen, in 2019, shows no fear of it. Instead, he points to the defeats Price has already suffered, as well as his own recent run of form, as reasons why he’s positively brimming with confidence.

“I think he’s perfect for me,” said Allen. “I think he’s meant for me. I’m his worst nightmare. I’m durable, strong, can do the rounds, and punch a little bit. I think I’m the worst opponent David Price could pick. If I had to pick someone to beat David Price, it would be me.

“He’s a massive name, it would be a high-profile fight, and it’s for a title. It’s the perfect fight for me. I just hope it comes off. I think it will if David wants it as much as I do.

“Everyone said Lucas Browne was a massive puncher and he’d knock me out if he landed something, but it never bothered me. I’ve got pretty good punch resistance. He caught me with a few shots but I’m always riding them and taking a little bit off them. I’m not getting caught flush often.

“With David Price, I firmly believe he is the perfect style for me and I’m all wrong for him. I think it happens. I think we’ll put loads of money in front of him and I believe he will think I’m easy to hit and he’s got a chance. I think Price happens next.”

It’s not David vs. Goliath but rather David vs. David. And, frankly, given where they both are in their respective careers, and given how evenly matched they appear at this juncture, David vs. David sounds about right.