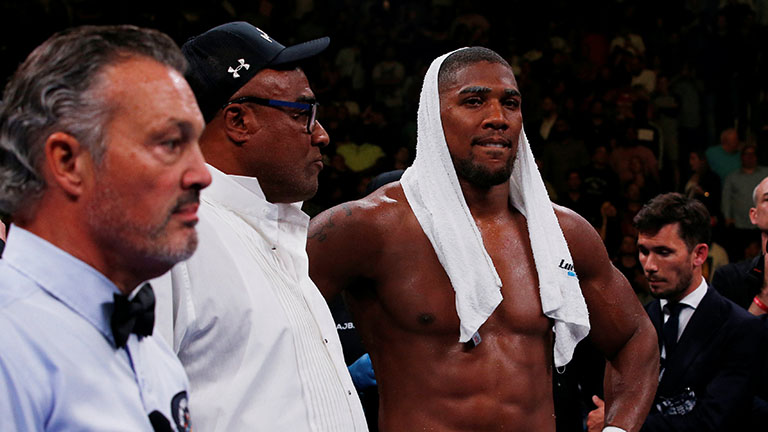 Saudi Arabia is now the frontrunner to host Andy Ruiz Jnr's rematch against Anthony Joshua, and Dana White prepares to enter the world of boxing

ACCORDING to reports, Anthony Joshua’s rematch against world heavyweight champion Andy Ruiz Jnr will no longer be heading for either New York or Cardiff but will instead take place in Riyadh, Saudi Arabia on December 7.

Gareth A. Davies writes in the Daily Telegraph that an announcement will be made today confirming that Ruiz and Joshua will contest the IBF, WBA and WBO titles in the Middle East, putting an end to a long-running saga during which both heavyweights made their case for having the fight at home.

Ruiz, the new champion, liked the idea of going back to Madison Square Garden, New York, the scene of the first upset, but liked the idea of having the rematch in Mexico even more. Joshua, meanwhile, was opposed to the latter, didn’t mind returning to NYC, but was most excited by the prospect of fighting in Cardiff, Wales, a city in which he is comfortable, having beaten Joseph Parker and Carlos Takam there.

However, two options became three when it emerged Saudi Arabia had proposed a case for staging the fight. An offer presumably too good to refuse, the fighters and their respective teams have seemingly gone for it and, in doing so, removed the headache of trying to determine who should have the home advantage for fight number two. The Middle East, though unusual as a host and somewhat disappointing, is at least neutral ground – neutral ground teeming with cash.

Dana White is one of the best promoters in combat sports, no question, but will have to go some to achieve in boxing what he has achieved in mixed martial arts.

The UFC President has been involved in MMA for over two decades yet has talked about starting Zuffa Boxing, his offshoot boxing promotional company, for some time now. It was first mentioned around the time of Floyd Mayweather vs. Conor McGregor in August 2017 and there were even Zuffa Boxing T-shirts doing the rounds, worn predominantly by White in the build-up to that money-spinning farce.

Now, two years on, White has confirmed it is still his goal to get Zuffa Boxing going and says there is every chance it becomes more than just a pipedream later this year.

“Exactly what the key is here is to go after the best up-and-coming fighters in the world, and the best fight the best. That’s it,” White told reporters in a media scrum for this week’s Contender Series. “I have a lot of different ideas on how to do that and I want to get together with my guy, run through everything, come up with a plan and then execute in November.”

It remains to be seen what sort of impact White and Zuffa Boxing will have on the noble art, but he would certainly come with pedigree, passion and some fresh ideas. Fresh ideas are key. After all, whether they care to admit it or not, a lot of what we see today in boxing, in terms of promotion, fight night set-up and television production, was inspired by, if not straight-up stolen from, the Ultimate Fighting Championship and Dana White. Anybody with a knowledge of both knows this to be true.