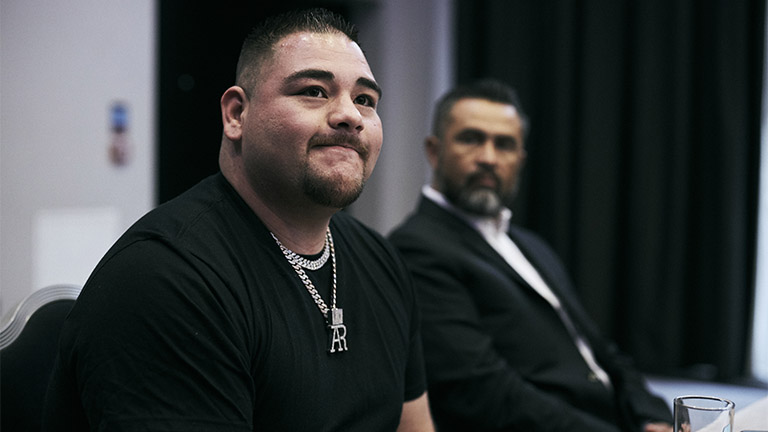 Manny Robles can't say for certain whether he will again corner Andy Ruiz Jnr, and Ryan Garcia vs. Jorge Linares could happen in May

THERE wasn’t much communication before his loss to Anthony Joshua, there was even less of it during the fight itself, and now, a month on, Andy Ruiz Jnr and his coach, Manny Robles, are still separated by distance and quietly conflicting points of view.

On December 7, Ruiz surrendered his WBA, IBF and WBO world heavyweight titles to Anthony Joshua, the former champion, only to later reveal he had taken the fight lightly, done little in the way of training, and had essentially let fame and fortune get to his head and strip from him all that had helped him topple Joshua first time around.

Robles, meanwhile, was sitting alongside Ruiz and nodding his head in agreement, disappointed of course by his man’s performance against Joshua in Saudi Arabia, but even more disappointed by his form – or attendance – in the gym ahead of it.

Since then, Ruiz has taken some time off and Robles has returned to his stable of fighters. Neither can say for sure what the future holds.

“I don’t know,” Robles told Sky Sports’ James Dielhenn when asked if it was likely he would be seen again in Ruiz’s corner. “That’s for Andy to decide.”

On their relationship, he added: “I want to say it is still good. He has gone on vacation and everything seems to be fine.

“We’ll find out in the near future. At some point, we will speak.

“If and when he’s ready to come back to the gym, that’s when my job begins. My job is not to call him every day. He’s a man, not a kid, and must be treated as such.

“You can’t convince someone to want something.”

Robles admitted Ruiz’s break from the sport was unusual for the former champion but was just as quick to say the fame and money had been “overwhelming” for his fighter. “He’s got to know how to handle it,” he said. “Maybe after this defeat, the game has humbled him. Stay humble or be humbled.”

Though happy to read the riot act to his beaten fighter, Robles remains fond of him and hopes to see him rebound from his Joshua defeat in the best way possible. He also hopes to be partly responsible for helping him do that.

“Absolutely,” he said. “He is an incredible fighter and has proved that to the world. He is a fighter to be reckoned with – very durable with great skills but he’s got to be ready.

“I know who I am, and where I stand as a coach and a person. I’m ready to get back to work, doing what I love to do. You can’t put a price on that.”

If hard work is the key, Andy Ruiz Jnr needs to try to remember where he left it. With or without Robles, he needs to start looking in places familiar – behind the sofa, beside his bed, under the carpet, inside leftover pizza boxes – and get back to what delivered him three world heavyweight titles a little over seven months ago.

Fights between rising stars and fading former champions tend to be boxing’s version of a good spring clean – that is, an ideal way to usher out the old and announce the arrival of new stars.

The latest addition to this tradition is a potential lightweight fight between former three-weight world champion Jorge Linares and hot prospect Ryan Garcia, which, according to promoter Oscar De La Hoya, is destined to take place this year. It could have happened as early as February, in fact, and could still take place in May.

“The timing wasn’t right,” said De La Hoya told FightHype, when asked why they didn’t match Garcia against Linares next month. “We’re looking forward to Ryan Garcia fighting on Valentine’s Day at the Honda Center in Los Angeles. We’re really proud of what we built over the years, and big things to come for Ryan Garcia.

“I think the fact that we have Linares and Ryan on the same card against tough guys (is enough). If they win, then they clash, who knows? Maybe on Cinco de Mayo. There’s a plan. We strongly believe Ryan can be a superstar for many years.”

One more thing about fights between the old guard and the new star: they don’t always go according to form or plan. It’s why they carry intrigue, despite the odds seemingly being stacked in favour of the younger man, and it’s why a potential May fight between Garcia, 19-0 (16), and Linares, 46-5 (28), can’t come soon enough.