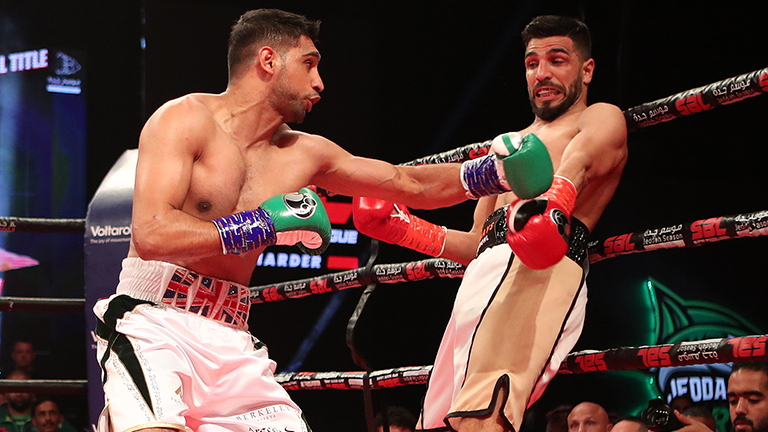 The talk of Joseph Parker and Dereck Chisora fighting later this year just won't go away, and Vijender Singh offers to give Amir Khan a proper fight

IT sounds wildly premature to us, given one of the two fights this weekend, but there is talk of Dereck Chisora fighting Joseph Parker later this year, perhaps on the undercard of Andy Ruiz Jnr vs. Anthony Joshua II.

Before he can contemplate meeting Parker, Chisora must get past the challenge of Poland’s Artur Szpilka this Saturday (July 20) in London. If he does, though, there’s every chance he will fight the New Zealander in a battle of Dillian Whyte victims before the year is out.

“I think it would be a great match-up the fans want to see,” David Higgins, Parker’s promoter, told Sky Sports. “It’s been brewing for maybe a year now.

“Of course it could happen in the UK. It might even headline an O2-type show. But I guess the other option would be to look it as an undercard to a big show.

“If a show like Ruiz-Joshua rematch was put together, in a way there’s unfinished business between all three of them.

“Provided Eddie Hearn and Matchroom can make that happen, that could be sensible too. There will be options there.”

Should the Ruiz Jnr vs. Joshua fight take place in Britain, Higgins is right: a Parker vs. Chisora supporting contest makes perfect sense. If, however, Ruiz Jnr gets his way and manages to bring Joshua back to New York, the thought of seeing Parker and Chisora, two men well-known to UK fans but irrelevant to most Americans, scrapping down the bill no longer seems quite so appealing.

Amir Khan has been involved in his fair share of tremendous fights during the course of his 14-year professional career and has taken one or two challenges many believed were health risks.

However, his last fight, a farcical fourth-round stoppage of former featherweight champion Billy Dib, fell into a different kind of category, that of mismatch. As pointless as it sounds, the fight served only to introduce Khan to a Saudi Arabian audience he hopes, should he get his wish, will pay to see him fight Manny Pacquiao in Jeddah around November time.

If it isn’t Pacquiao next for Khan (and Pacquiao insists it won’t be), he has a ready and willing opponent in the form of Vijender Singh, an undefeated boxer from India, who has followed a win last weekend by calling out the two-time world champion.

“Stop fighting children. I am ready for a bout,” the 2008 Olympic bronze-medallist told The New Indian Express.

“I am ready to fight with Amir. He picked a junior boxer to fight. Neeraj Goyat (Khan’s original opponent, replaced by Dib a fortnight before the fight) is way junior to me. I had said before and I am saying it again: ‘I am ready to fight whenever he tells me to.’ He should stop fighting kids.”

Whereas Khan was too big and too strong for Dib last Friday, the opposite would be true in any potential fight against Singh, 11-0 (8). Singh, after all, is a natural super-middleweight who would have to come down in weight to make himself available for what would be the biggest fight of his career. For this, he has a solution: “I can reduce my weight a little and he can increase it and we can agree on a mid-point.”

It’s an admirable attempt to get the fight made. It really is. But that doesn’t make the fight any more interesting nor mean it is one anybody needs to see.

We’ve had the introduction fight. We’ve had the coming-out party. At this point, when it comes to Khan’s Middle East adventure, it really is Pacquiao or nothing.