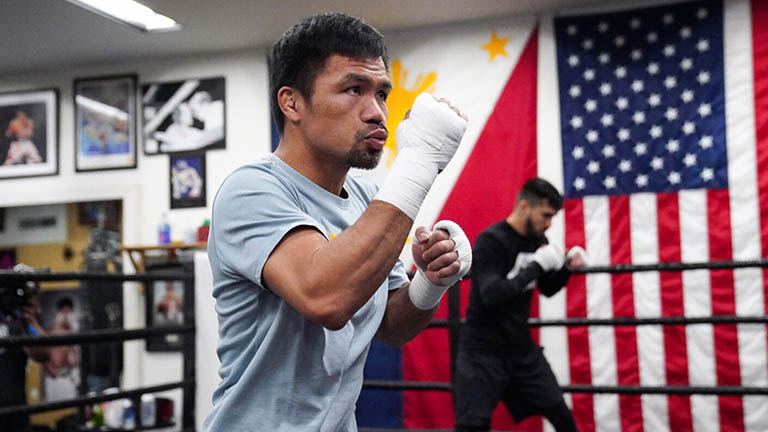 Manny Pacquiao's next fight at welterweight is going to be a big one, and Michael Hunter is offering his services to all the top heavyweights

FILIPINO superstar Manny Pacquiao has never really been one for taking easy or meaningless fights.

Big fight or nothing, he has spent most of his career fighting fellow champions and big names, knowing it is these kinds of fights that will ultimately keep his pockets full and his family – and extended family – fed.

Now 41 years of age, Pacquiao, 62-7-2 (39), shows no signs of letting up. He is the current WBA welterweight champion and a man whose deterioration, which should now be in full flow, has somehow been put on hold, much to the delight of his fans.

This delay has allowed him to beat the likes of Keith Thurman, Adrien Broner and Lucas Matthysse in recent outings, and is what gives him the confidence to chase Errol Spence, the IBF champion at welterweight, and Mikey Garcia, a three-weight world champion.

“My plan is to get back into the ring this coming July. Second or third week in July. Training should start in April, May, June. We have enough time.

“There’s a lot of possible opponents, like Mikey Garcia, Errol Spence or [Terence] Crawford and also there’s boxers from Canada and Mexico who want to fight with me.”

The question is, if you can’t keep a good man down, what will it take to keep a great one down?

Heavyweight dark horse Michael Hunter is a man seemingly forever on the hunt for career-defining fights and paydays, confident he can upset the odds even at short notice and on foreign soil.

The throwback from America has already ruined the plans of unbeaten contenders Martin Bakole and Sergey Kuzmin, and appeared unlucky not to come away with a victory in a drawn fight against Alexander Povetkin last time out. He also previously showed his quality at cruiserweight when pushing Oleksandr Usyk, arguably the finest cruiserweight of all time, the 12-round distance in 2017 (which remains Hunter’s only defeat).

Now, having built a reputation for fighting all-comers, Hunter, 18-1-1 (12), is after his next big-name scalp, with New Zealand’s former WBO heavyweight champion Joseph Parker high on the wish-list.

“Parker is an easy opponent for us,” Hunter’s manager Martin Mikolajczak told Sky Sports. “Parker is slow on his feet and his cardio is terrible. Michael would definitely KO Parker.”

Such is Hunter’s ambition, it’s not just Parker he has in mind for 2020. In fact, moments after yesterday’s Dillian Whyte vs. Alexander Povetkin announcement, the 31-year-old revealed on social media that he was starting training camp and ready to step in should one of the two get injured ahead of their May 2 fight. “We all know who Uncle Eddie (Hearn) likes to call when a heavyweight falls out,” he said.