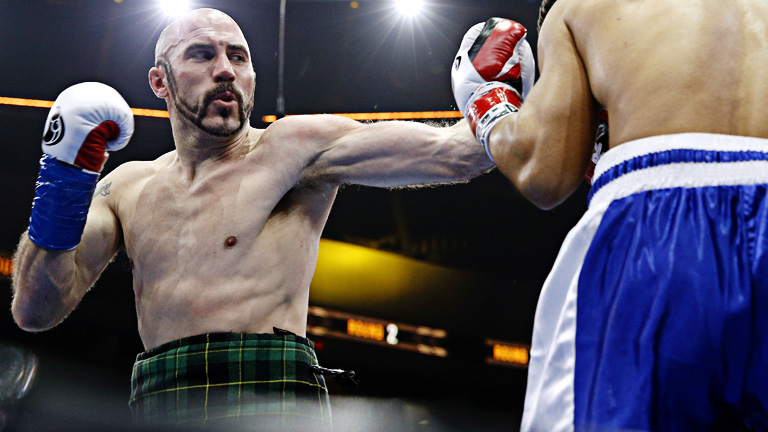 'Spike' O'Sullivan would appear to have a fight worth shouting about for September 15, and Luke Jackson won't leave poor Carl Frampton alone

THOUGH yet to be officially confirmed, all the signs suggest Ireland’s Gary ‘Spike’ O’Sullivan will lock horns with Canadian puncher David Lemieux on September 15 at the T-Mobile Arena in Las Vegas.

The fight has long been rumoured to find a home on the undercard of the world middleweight title rematch between Gennady Golovkin and Saul ‘Canelo’ Alvarez, and it would seem, based on O’Sullivan’s recent social media activity, that an announcement could be imminent.

Since defeating Antoine Douglas in December, a breakout win, O’Sullivan has fought just the once, stopping Berlin Abreu in three rounds in May. In between those fights, there was talk of a fight with Gennady Golovkin and there was talk of a fight with Canelo Alvarez, yet both failed to come to fruition, leaving Spike hungry for a big fight and momentarily treading water.

In Lemieux, though, he would appear to have found exactly what he’s looking for. Though not a Golovkin or Canelo, the French-Canadian defeated Karim Achour in May, his first fight since being thrashed by Billy Joe Saunders last December, and remains a highly-ranked and watchable contender in the middleweight division. Put him in the right type of fight and Lemieux, a straight-forward slugger with fight-ending power in either hand, typically entertains.

For Lemieux, Billy Joe Saunders was never the right type of fight. We know that now. But Gary ‘Spike’ O’Sullivan, on the other hand, certainly is.

I’ll admit, I knew nothing about Luke Jackson before he agreed to fight Carl Frampton at Windsor Park, Belfast on August 18, and then decided to goad the Irishman at every available opportunity.

But now I am not only familiar with the name, I’m also interested to see what he brings to the table against a former two-weight world champion in a couple of weeks. I want to know if he’s as confident and as good as he makes out. I want to know if 31-year-old Frampton, last seen beating Nonito Donaire in April, is as faded as Luke Jackson, 16-0 (7), would have us believe.

“Across the board he is phenomenal, but I don’t think he is as good as he once was,” explained Jackson in his latest na-na-na-na-na taunt.

“In the first fight against Leo Santa Cruz he boxed out of his skin and deserved to win, but he hasn’t looked the same since.

“Carl is a very good fighter who does everything good, but I don’t honestly think he does anything great.”

The intention, one would assume, is to rile Frampton, get him emotional, and have him chasing Jackson the way he chased Santa Cruz in the pair’s rematch. In fact, such an approach would work on two fronts: in addition to aiding Jackson strategically, it would also help sell a fight that suffers whenever it’s compared to Frampton vs. Donaire (Jackson is no Nonito – at least in terms of achievements and name power) or, indeed, most of Frampton’s big title fights.

“We are going to punch each other in the head. I don’t really care if what I say upsets him,” said 33-year-old Jackson, doing a fine job of promoting the thing.

“I don’t know if he wants me to call him a Hall of Fame fighter or the greatest, but I don’t think he is.

“He is very beatable, and I think I can beat him. It’s as simple as that.”

It’s hard to find many in boxing who have a bad word to say about Carl Frampton. Yet, over in Australia, it would seem we have found one (and, for the purpose of making a routine fight attractive, that’s a good thing).