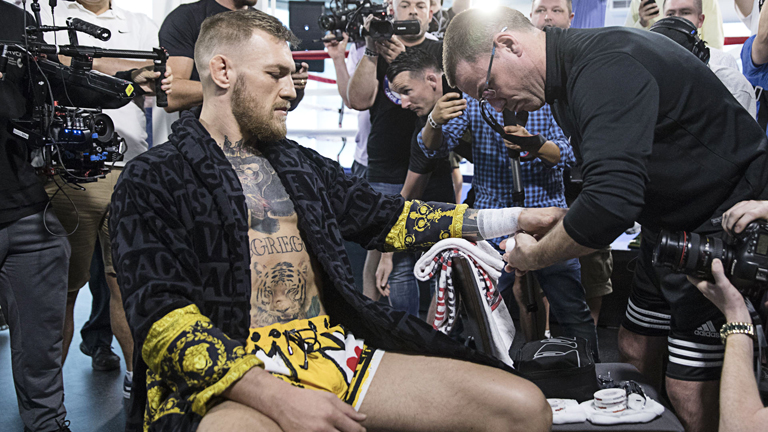 Conor McGregor says he hasn't yet given up the boxing dream, and Josh Taylor is hopeful his next fight will end up in Scotland

IF you thought we had seen the end of Conor McGregor in a boxing ring, think again.

Though now back in MMA, and currently gearing up for a fight against Donald Cerrone on January 19, McGregor insists his 0-1 boxing career is not over just yet and believes fights against Floyd Mayweather, the man responsible for his sole pro loss, and Manny Pacquiao could still come to fruition.

“I’d like to rematch Floyd,” McGregor told ESPN’s Ariel Helwani. “I think we should rematch Floyd. I mean, he’s flirting with it. He can go and pick someone else, (but) it’s not going to be the same. It was a great, great experience and I look forward to doing it again. It’s going to happen again.

“We were actually close to signing Manny (Pacquiao). There was an offer made.”

When asked whether a fight with Pacquiao remains a possibility, the former UFC champion said: “Very much so.”

Whether all this talk is just bravado on McGregor’s part, that is, an unwillingness to let go or concede defeat, only time will tell. But certainly, as the sport moves more and more towards freak fights to make fortunes, the relevance of Conor McGregor, arguably the biggest star in combat sports today, will never fade as quickly as some – at least those in boxing circles – would like.

Without wishing to state the obvious, it could be a pivotal next few months in the career of Josh Taylor.

Having recently parted from Cyclone Promotions to sign with Top Rank, he must first source a new coach, someone who can build on the work he did with Shane McGuigan, his old coach, and then, once settled, Taylor must make a mandatory defence of his WBA and IBF super-lightweight titles, likely to be against Thailand’s Apinun Khongsong.

This fight, considering less appealing than Taylor’s last, a wonderful battle against Regis Prograis, is nevertheless vital if Taylor wants to keep his belts and it could even see the Prestonpans puncher return to Scotland to defend his titles.

That’s the plan anyway. Taylor, 29, should he have it his way, will defend his belts against Khongsong before then going on to fight the winner of the February 1 fight between Jose Ramirez, the WBC and WBO champion at his weight, and Viktor Postol, a rival of old.

“That fight has to happen at some point this year. That’s my goal, my focus this year – becoming undisputed king, the first (Scottish) guy to do it since Ken Buchanan.

“I’m hoping I’ll have a defence in Scotland before I then go Stateside and chase the Ramirez fight.

“I can’t see Ramirez coming over here. I’d like to get it here; I’ll try to push for it to be here. But if I have to go to America, fair play, I’ll go to America and see my name up in bright lights.”

Taylor unified the IBF and WBA titles with a victory over Prograis in October to take his record to 16-0. Khongsong, meanwhile, six years Taylors junior at 23 is also 16-0 but, crucially, has competed outside his native Thailand only once.