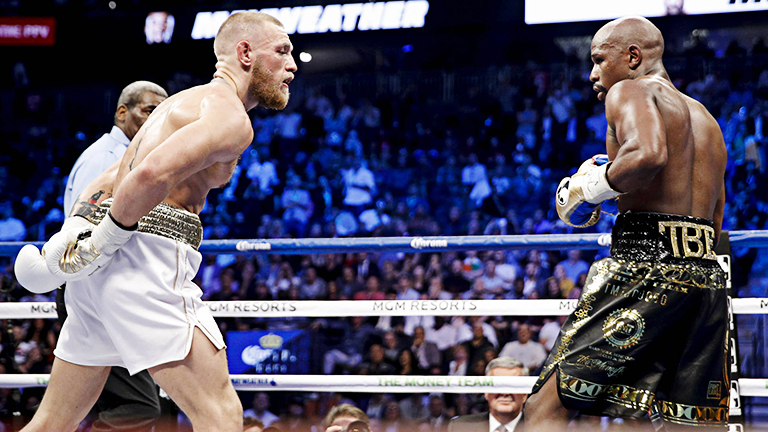 Conor McGregor is eager to box again at some point in 2020, and Anthony Joshua's world heavyweight title defence against Kubrat Pulev is targeted for May

DESPITE not being a boxer, UFC star Conor McGregor continues to make more noise and grab more attention than the majority of his boxing rivals at this early point in 2020.

Boxing has got off to a sluggish start so far this year, certainly in news terms, but McGregor, in keeping one foot touching boxing ring canvas, has managed to garner endless column inches thanks to a number of call-outs of big-name boxers.

He has in recent weeks been linked with fight against Floyd Mayweather, in what would be a rematch of their 2017 mismatch, Manny Pacquiao, and Terence Crawford.

The likelihood of any of these fights happening is arguably as slim as his chances of winning them, but still McGregor, such is his charisma, captures the imagination of MMA fans and boxing fans alike.

Moreover, his manager, Audi Attar, has told MMA Fighting, that the Irishman, a UFC champion in two weight classes, isn’t just saying things for the sake of it.

“He’s serious about boxing,” Attar said. “That’s something that I can tell you. If he says he has an interest in something, it’s likely going to happen.

“At the end of the day, I saw Floyd, I saw Manny and now Bob Arum, who at one point said, ‘It’s not a smart idea to crossover.’ He’s a believer now as well.

“We definitely monitor everything. We monitor not only fan engagement and interest from the public, but then you look at who’s out there talking what. It could be we have a few different options to weigh and decide on.”

Thankfully for boxing fans, Conor McGregor remains a gargantuan star in the world of mixed martial arts, one capable of making more money than any of his peers, and therefore doesn’t need boxing the way boxing might need him. That’s not to say McGregor won’t like the idea of making obscene amounts of money from the sport – he has done this previously, of course – but it could mean he’s a bit more reluctant to again sacrifice his body in a boxing match against a boxer who knows how to box.

Having recently competed in New York and Saudi Arabia, Anthony Joshua, the WBA, IBF and WBO world heavyweight champion, is apparently keen to once again box in the United Kingdom.

We know the identity of his next opponent – IBF mandatory challenger Kubrat Pulev – but still we wait on a date and a venue. The former is expected to be some time in May or early June, while the latter, should Joshua get his way, will see the Pulev fight end up taking place in London.

“Almost certainly that will be AJ’s next fight and almost certainly (it will take place) in the UK,” Eddie Hearn, Joshua’s promoter, told Sky Sports.

“The main issue we have is Pulev wants to make as much money for that fight as he can.

“There isn’t as much money for that fight in the UK as there is elsewhere, but AJ has given me the instruction that ‘I boxed in New York, I boxed in Saudi, I would like to do this one in the UK.’”

Yes, it’s true: the search for a venue is every bit as drab as the fight itself.