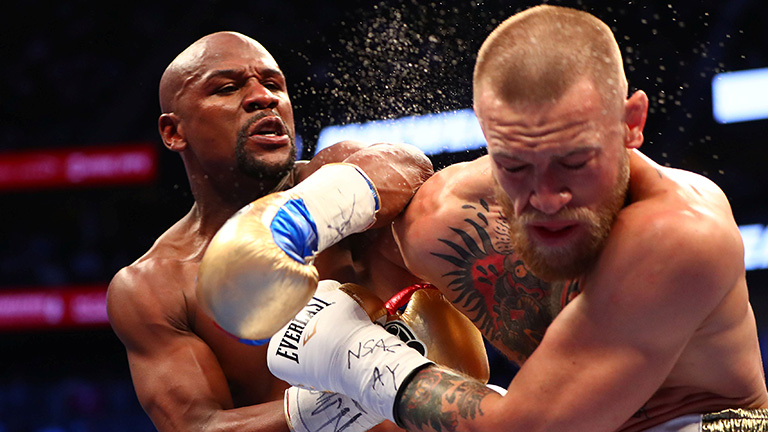 Floyd Mayweather mocks Manny Pacquiao while insisting there's no need for their rematch, and Deontay Wilder says Dillian Whyte will soon be silenced

IN case anyone cares, Floyd Mayweather wants to make it clear he only attended Saturday’s fight between Manny Pacquiao and Keith Thurman in Las Vegas because he was “supervising” the Filipino, his so-called “employee”.

That’s the claim made by finicky Floyd today in a long-winded social media post following some tiresome back-and-forth with Pacquiao ahead of what many suspect will be an equally tiresome rematch in 2020.

Never one to relinquish control, let alone seem desperate, Mayweather is playing hard to get at this stage, complaining about being synonymous with Pacquiao, yet doing all he can to keep his name attached to him and to the rematch. For where there’s money, there’s always a point. And where there’s money, you’ll invariably find ‘Money’ Mayweather.

“I was only at your fight supervising you, my employee,” Mayweather wrote.

“I find it real ironic how every time Pacquiao’s name is brought up in the media, my name is always attached to it. This man’s entire legacy and career has been built off its association with my name and it’s about time you all stop using my brand for clout chasing and clickbait and let that man’s name hold weight of its own.

“For years, all you heard was that ‘Floyd is afraid of Manny Pacquiao.’ But what’s funny is, when we finally fought, I won so easily that everyone had to eat their words! All of the so-called boxing experts, critics and jealous American ‘fan base’ either went mute and ran for cover or made every excuse in the world as to why I should give Manny Pacquiao a rematch.”

When hearing him speak like this, you’d be forgiven for thinking Mayweather has zero interest in giving Pacquiao a rematch. And perhaps, deep down, that’s the truth. Perhaps, at 41, the last thing he wants is to have to deal with ‘Pac Man’ for a second time.

But the lure of money has always been strong for Mayweather. It is, along with the need for attention and the limelight, something that drives him. It makes his world go round. It is his God.

Moreover, there remains a sense that, despite beating Pacquiao in 2015, Mayweather is somehow envious of the longevity Pacquiao is showing and the wins he continues to accumulate in the final chapter of his 24-year pro career. If this wasn’t the case, contentment would be enough for him to keep quiet.

“My take on all this bullshit is that y’all are just upset that I broke Rocky Marciano’s record and hate the fact that a black, high school dropout outsmarted you all by beating all odds and retiring undefeated while maintaining all my faculties simply by making smart choices and even smarter investments,” said Mayweather, offering his own theory. “Ultimately, I will always have the last laugh!”

Yes, that’s probably true. And we will no doubt hear it, this sound of laughter, as he’s on his way to the bank.

WBC heavyweight champion Deontay Wilder says he is pleased Dillian Whyte, a “crybaby”, has worked his way into a number one position but promises he will do all within his power to “knock him out silly” when the two finally share a ring.

Wilder and Whyte have been linked for some time now, with Whyte accusing the Alabama puncher of ducking him, and Wilder accusing Whyte of doing the same. It’s as dull as it sounds, this he-said, she-said, but at least the two of them will now get the chance to settle their dispute where it matters, in the ring, at some point next year.

“Going around crying ‘600 days’ and all that. Motherf***er, you could’ve fought (me). He had four opportunities to fight. What took you so long?

“They want to have this uproar about him not getting his opportunity when he had opportunities. It’s just to build up the fight, it’s pathetic and it’s stupid. But, you know, I’m happy that he’s finally the mandatory.”

As for what happens when Wilder and Whyte share a ring, at last, the American has no doubt about the outcome. He anticipates plenty of talk beforehand and a swift conclusion on the night.

“I can’t wait,” he said. It’s going to be like (Dominic) Breazeale all over again.

“When it’s time for that fight to come, he’s gonna be in the fight of his life. I want him to know that right now.

“I don’t play around with nobody with what I say. Everybody know I’m the realest in the business and when I say things I mean it.