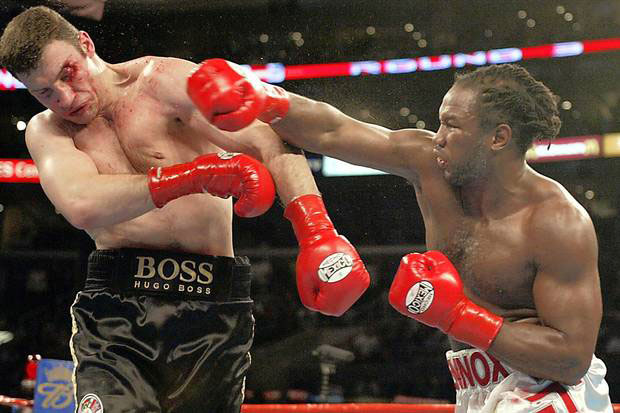 According to reports, Lennox Lewis and Vitali Klitschko will meet again, this time in Kiev, 15 years on from their classic first encounter

COMPARISONS are one thing, but attempting to somehow push and rationalise a future fight between Irishmen Carl Frampton and Michael Conlan, just because they’re Irish, is lazy in the extreme.

One of them, Conlan, is a professional novice of just eight fights, while the other, Frampton, has 26 fights to his name, is a former two-weight world champion and two years ago was many people’s pick for ‘Fighter of the Year’.

But, but, but… they’re both Irish. Did I mention that?

“Why certain parts of the media keep bringing it up is beyond me because it is quite obvious Mick and I are at two completely different stages of our careers,” Frampton told Sunday Life. “Secondly, we’re mates. So when you put those two things together it just makes the whole suggestion absurd.

“Quite simply, once and for all, Mick and I will never fight and I hope this puts an end to all the silly talk and questions. Mick is a developing professional and I’m at a stage of my career where I’m looking to have world title fights because who knows how long I have left.”

So there. Case closed.

Conlan can now be allowed to get on with preparations for fight number nine – yes, nine – while Frampton, keen to manoeuvre his way towards a rematch with Leo Santa Cruz or an IBF shot against Josh Warrington, can gear up for his August 18 date at Windsor Park against Luke Jackson.

Back in April, Liam Cameron successfully defended his Commonwealth middleweight title with a two-round demolition of Nicky Jenman. Today, however, he fights to clear his name, and get a 26-fight pro career back on track, following a failed performance-enhancing drug test.

License suspended, Cameron has been given the option of vacating his Commonwealth belt but decided against it, claiming he has “nothing to hide”.

In a conversation with the Sheffield Star’s Bob Westerdale, the 27-year-old said: “I would rather be stripped of the title, go out on my shield and prove my innocence.

“Then I will come back and win it again.”

He goes on to say the suggestion that he might have taken cocaine is “rubbish”, before pinpointing a pre-fight trip to the dentist as a possible receive for the failed test.

“I had right bad toothache before the fight and was given a course of antibiotics,” he explained. “My body reacted to that by producing a very small amount of metabolic acid which seems the most likely cause of the test results.

“People will say what they want. But I am not that stupid to take cocaine or anything else a few days before a fight.

“I was at the pinnacle of my career. I had worked my backside off for nine years and knew full well I would be having a drug test after the Jenman fight. In fact, my own promoter Dennis Hobson paid £1,000 for the test.”

Whatever the truth, it’s a kick in the teeth for a 27-year-old enjoying the best form of his career.

And finally… although reports like this are, admittedly, tough to stomach, I do love the idea that many people will see the headline, click the link, and perhaps even believe the story – widely reported – that Lennox Lewis and Vitali Klitschko are set to FIGHT again, 15 years after their gory first encounter in Los Angeles.

The FIGHT, which we’re told will actually be an ‘exhibition’, whatever that means, is set to take place during the WBC Convention in Kiev, Ukraine, running from September 30 to October 5.

Now, if it involves punches, I’d be surprised. If it involves the pair training for it, I’d be really surprised. But, sure, there’s every chance Lewis and Klitschko, the mayor of Kiev, get paid enough money to reunite between September 30 and October 5 – perhaps answer a few questions together, perhaps even hold pads for one another – and do so in the name of the 15th anniversary of a heavyweight classic. Sure, why not?

The idea of an actual FIGHT, however, with Lewis soon to turn 53, and Klitschko soon to turn 47, seems farfetched in the extreme.

*** Boxing News contacted Lennox Lewis’ PR this afternoon and received the answer we expected to receive. “News to me,” we were told.