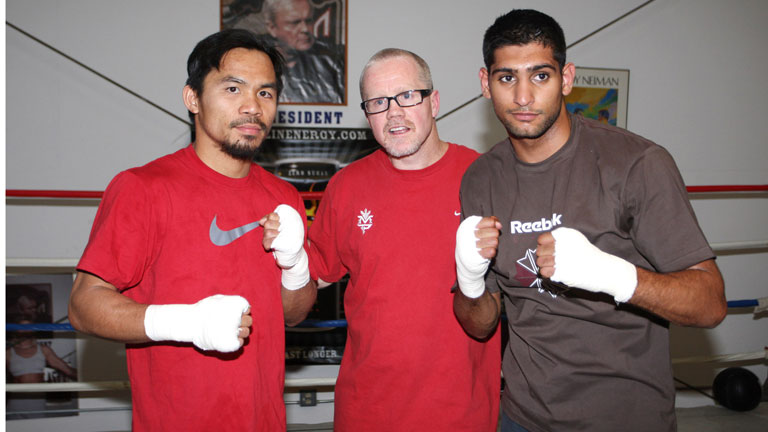 Amir Khan wants to bow out against Manny Pacquiao, his old gym mate, while Anthony Joshua should seek out George Foreman once on the comeback trail

ALTHOUGH Amir Khan’s next fight seems somewhat pointless, he would like to end his 14-year professional career with a more meaningful one, against a man he knows only too well.

If Khan gets his wish, he will defeat unknown Indian boxer Neeraj Goyat on July 12 in Saudi Arabia and then position himself for a fight against Filipino legend Manny Pacquiao, a welterweight with whom he used to train at Freddie Roach’s Wild Card gym in Los Angeles.

“There’s always been talk about Manny Pacquiao and maybe we can get him in the ring this time,” Khan told The Sun. “It would be a good way to finish.

“It’s one of the reasons I’m taking this (Goyat) fight now. I know there’s a bigger picture at the end of it.

“There could be a big name at the end of the year or early next year where we could be fighting one of the best fighters in the world and it could be a title fight.

“We had talks with the top ministers and Saudi Arabia is so behind boxing. They don’t just want to do one show, but many shows.

“A fight with Manny Pacquiao would set boxing in the Middle East forever. Normally, fights like that would happen in Las Vegas.

“At the same time, it would be great for me to say I fought the best up and down the divisions, from all over. This is the last chapter in my career.”

For much of his career all the talk was of Khan trying to lure Floyd Mayweather into fighting him. He was convinced he had the speed to trouble the great American and presumably also quite liked the idea of the money a fight against Mayweather would generate.

It is Pacquiao vs. Khan, though, that always made more sense and carried the more compelling storyline.

Whether the fight happens this year is dependent not so much on Khan winning his next bout – that should be a given – but Pacquiao coming through a July 20 date against undefeated WBA welterweight champion Keith Thurman unscathed. That could prove easier said than done.

Much has been made of the lack of ‘boxing people’ around dethroned WBA, IBF and WBO world heavyweight champion Anthony Joshua and how this could have played a part in his recent fall from grace.

His team is too big, some have said, comprising mostly sycophants for whom boxing is a foreign language. And worse than that, there has been talk of Rob McCracken, Joshua’s key boxing man, being displaced.

Lennox Lewis, the former heavyweight champion of the world, has been quite outspoken about Joshua’s defeat to Andy Ruiz Jnr on June 1 and has made a number of suggestions to help his countryman rebound from the loss. His latest idea would entail Joshua getting in touch with another former heavyweight champion and picking his brain on all manner of things to do with defeat and bouncing back.

“I know George Foreman put his name out there,” Lewis told Inside PBC Boxing. “He needs someone of that calibre to talk to.

“George helped my career just by commentating on my fights. I’d listen to him.

“Because that’s what George said. He knows – he’s been there.”

Lewis, too, has been there. He defeated every man he faced in a 14-year professional career and retired in 2003 with a record of 41-2-1 (32). He came back from a couple of shocking defeats of his own – the first against Oliver McCall, the second against Hasim Rahman – and now lives to tell the tale. If, therefore, anyone’s worth listening to, it’s probably him and, equally, someone like Big George. Fighters. Boxing people.