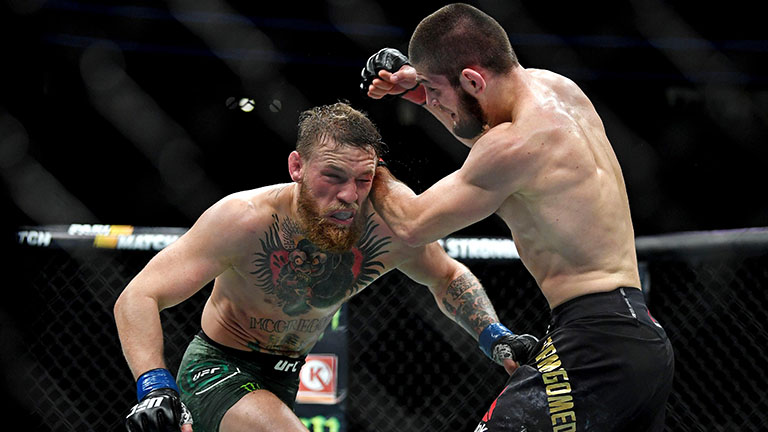 IF Khabib Nurmagomedov wants to make money from a fight against Floyd Mayweather, the fight will have to take place in a boxing ring, under boxing rules, as opposed to his natural habitat – a UFC Octagon.

These are the guidelines made clear to all potential Mayweather opponents – whether boxers, kickboxers and mixed martial artists – and Nurmagomedov, the current UFC lightweight champion, can expect no receive no special privileges as rumours of a fight against Mayweather in 2020 seemingly won’t go away.

This despite the fact the Russian has signed a contract to fight Tony Ferguson, his foremost rival in MMA, in April and appears more than happy continuing to fight as a mixed martial artist.

“I have already signed a contract for my next fight in April,” Khabib told TASS. “At the moment, I’m not thinking either of boxing or of Mayweather.

“I have a very serious opponent. I need to overcome this challenge and then we will see.

“Boxing is his (Floyd’s) sport and he has devoted all his life to this sport. Today, he is the best in this sport with 50 wins in 50 fights.

“What can I say? He is one of the greatest boxers of all time. This is why it will be tough fighting against him under the rules of boxing.”

Khabib Nurmagomedov is nobody’s fool. He knows what a tough fight means – it means one all but impossible to win – and knows that the sensible thing to do is to block Mayweather’s calls and never again entertain the possibility of doing something so ridiculous.

Yet, despite that, he also knows this: one dance with Mayweather would be enough to change the lives of not only his own family but also any other lives he wished to change.

So I guess, in the end, he will have to weigh it up. He will have to ask himself the same question Conor McGregor asked himself in 2017: How much money is humiliation worth?

Speaking of McGregor, the outspoken Irishman isn’t happy with Tyson Fury and Ben Davison’s decision to part ways and has made his feelings known on social media.

Fury and Davison, of course, were once a burgeoning fighter and trainer team, but announced their split yesterday, much to the surprise of the boxing world. “Tyson and myself had to make decisions which resulted in our working relationship coming to an end,” Davison tweeted. “We remain friends and he will smash the dosser (Deontay Wilder).”

The pair had only been working together for a short period of time – a period which included wins against Sefer Seferi, Francesco Pianeta, Tom Schwarz and Otto Wallin, as well as that famous draw against Deontay Wilder – but there had been rumblings of discontent following Fury’s victory over Wallin, when his father, John, publicly criticised Davison.

Even so, their parting still comes at a strange time, what with it being so close to a proposed rematch against Wilder in February, and McGregor, a UFC star with a 0-1 pro boxing record, doesn’t like the idea – not one bit.

“Get over it men and get back to work,” he wrote on social media. “Finish the job.”

Because it’s not yet clear why Fury and Davison have decided to go their separate ways, one can’t say if a reconciliation would be as simple as McGregor makes it sound.

Already the signs suggest Fury is looking to move on and it is believed he has earmarked Javan ‘Sugar’ Hill, nephew of the late, great Emanuel Steward, as a potential replacement. Indeed, he even tweeted, hours after news of the Davison split broke, that he was looking to get “the old team back up and running”, a reference to the brief time he and Hill spent together at Detroit’s Kronk gym.