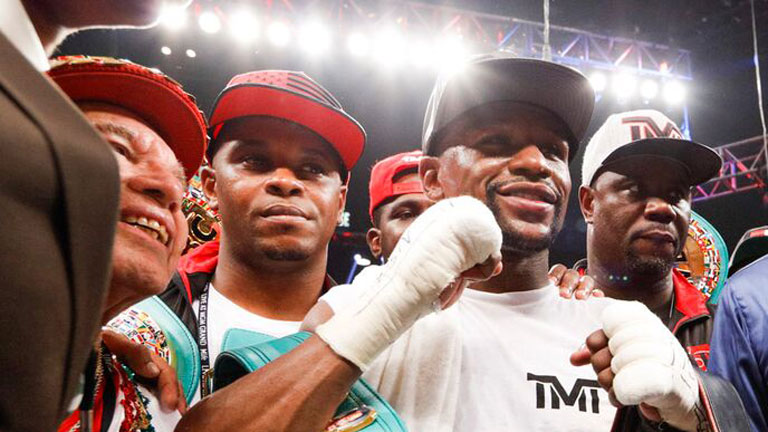 IN a lot of ways it makes complete sense for a boxing match like Floyd Mayweather vs. Khabib Nurmagomedov – read: a boxing match between a boxer and a mixed martial artist – to end up taking place in Saudi Arabia.

Chances are, there, in a land where money rules, Maywweather vs. Nurmagomedov would seem less out of place, less of a freak show, and presumably be viewed more as a masterstroke of opportunism than a cynical attempt to exploit the ignorance of millions of casual sports fans. Not only that, both men would become richer than God in the process.

In fact, according to The Sun, Nurmagomedov has already received an offer of £78 million to fight Mayweather in Saudi Arabia, with the oil-rich country apparently eager to keep splashing the cash to secure the world’s biggest – or at least most talked about – sporting events.

In December, they hosted Anthony Joshua’s rematch against Andy Ruiz Jnr, which, according to reports, landed the Brit a payday in the region of £66 million. But, of course, Mayweather vs. Nurmagomedov, though less significant, would be a far greater spectacle, featuring two bigger names, and therefore it is inevitable there will be interest in it from Saudi Arabia.

As for Nurmagomedov, his interest in the fight hinges on just one thing.

“Mayweather is only a money fight,” he told Yahoo Sports. “It’s only for the money, period. That’s it.

“But they [the Saudis] want me to come very badly to fight with Mayweather.”

A few weeks ago Nurmagomedov suggested any potential fight against Mayweather should see them do 11 rounds of boxing followed by one five-minute round of mixed martial arts. Despite this still leaving the odds stacked against him, it seems a more sensible approach than the one Conor McGregor took to fight Mayweather in 2017 – that is, agreeing to box 12 rounds against a master boxer.

Then again, if we’re looking for clever ideas, an even greater one would be to forget the notion of Mayweather vs. Nurmagomedov altogether.

A month on from his seventh-round stoppage win over American Mark DeLuca and Kell Brook is feeling ready to take on the best in the world again.

The former IBF welterweight champion appeared close to something like his best when bullying DeLuca in February but will concede he still has a long way to go to recapture the form of old. He will know, too, that he will have to unlock even more of his potential if he is to successfully mix it with the men currently lurking at the top of the division – men like Terence Crawford, the WBO champion, Manny Pacquiao, the WBA champion, and Errol Spence Jnr, the IBF champion and someone Brook knows only too well.

Be that as it may, Brook isn’t shirking from the challenge.

Indeed, whether it’s at welterweight or super-welterweight, the weight at which he beat DeLuca, Brook feels he is ready now to take on the world’s best, with one man, Crawford, somewhere near the top of his wish list.

“He’s running out of dance partners and there’s one right here,” Brook told FightHype. “Listen, I’m in a better mental and physical state than when I fought [Errol] Spence, yeah.

“There’s an argument – who’s number one at welterweight, Crawford or Spence?” said Brook. “With the car crash, you have to put Crawford [above Spence], because he’s more active and look at what he’s been doing. Listen, I put myself on this side of the pond [U.S]. I want them dancing partners. Pacquiao, [Keith] Thurman, [at] light-middleweight [Jermell] Charlo, these kinds of names you have got to mention along with my name.”

Brook recently explained to Boxing News his philosophy going forward, stating that he feels like he has underachieved and never given the sport – especially the training side of it – its full respect.

Now, aware he is just one defeat away from calling time altogether, the Sheffield fighter seems hellbent on not only winning another world title but discovering how good he is in the process.

If that means tackling someone like Crawford, arguably the finest American fighter out there right now, so be it. You can’t fault Kell Brook for trying, nor can you begrudge him wanting to find out what many fighters would rather not know – the truth.