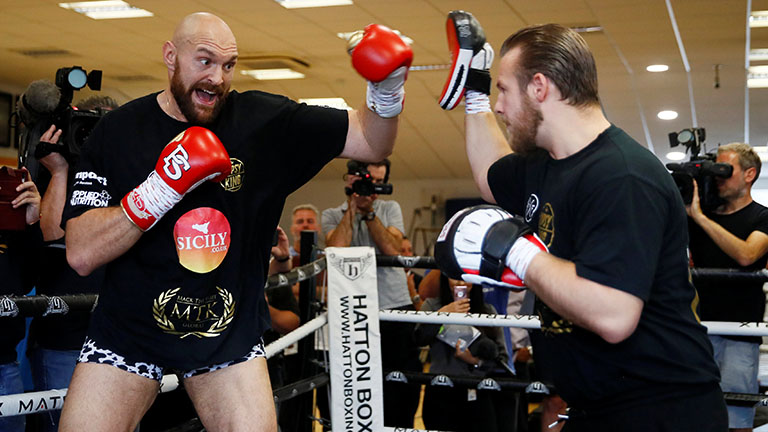 Anthony Joshua says Tyson Fury has to do what's best for him going forward, and Evander Holyfield believes he would add value to Zuffa Boxing

DESPITE some pressure and criticism following a June 1 loss to Andy Ruiz Jnr in New York, Anthony Joshua ultimately decided to stick with his trainer, Robert McCracken, and go about plotting his revenge – which he secured on December 7 in Saudi Arabia.

Not all cases are the same, however, and Joshua, realising this, understands why his British rival Tyson Fury has decided to part ways with Ben Davison, the coach partly responsible for getting his career back on track in the last couple of years.

“Fury has to do what is right for him,” Joshua told Sky Sports. “Tyson’s success is Ben’s success. If Fury feels like this is right for him, he has to trust his instinct and follow it because it will only be him that [gets in the ring].

“I have to trust my instincts. I was watching a Lennox Lewis fight – he had Emanuel Steward in his corner but they still only announce ‘Lennox Lewis’. They don’t mention the team. Tyson Fury has to do what’s right for Tyson Fury because it’s only his name that is mentioned when announced as the winner or the loser. As a fighter, first and foremost, it doesn’t matter about anyone else.

“I stuck to my guns, didn’t listen, and stayed with Rob. We spoke to alternative coaches. When me and Rob are doing pads we need eyes on the outside to say ‘your left hand is down’ or ‘your chin is up’. We created a team which worked really well. In a short space of time he corrected mistakes.

“He has seen me grow. I had a son – it was a scary time because I was young, but he helped me through it. He backed me, and I’ve backed him. We have supported each other.”

Since announcing his split from Davison, Fury has joined forces with Detroit stalwarts Javan Steward and Andy Lee and will train for a mooted February rematch against Deontay Wilder, the current WBC heavyweight champion, in Las Vegas.

With talk of UFC President Dana White finally getting Zuffa Boxing under way, and doing so with the help of Floyd Mayweather, it should come as no surprise to hear other big names volunteering to get involved.

The latest is Evander Holyfield, the former world cruiserweight and heavyweight champion, who believes his expertise could be of great value to White on his mission to repeat in boxing the success he has had in mixed martial arts.

“I think Dana White had proven when he did the mixed martial arts he knows the stuff. I think that with him and the way that he do things, it could be big. Hopefully if he do it, let me be part of it,” Holyfield told Sirius XM.

“I just think that if the thing is going to grow for him, he has to have people who have been the very best. People tend to come and pay more attention when you have people like myself and maybe Floyd Mayweather, anybody who has been world champion, who was good, and there was no doubt that they were good fighters. This kind of draws attention. It makes things a little easier than it would if you think you can just do it yourself.”

The inclusion of Holyfield in the Zuffa Boxing ranks could be the difference between it being seen as a fly-by-night venture, long delayed, and The Real Deal, so to speak.

Then again, just as Holyfield knew how to bully the bully in the heavyweight division, it’s fair to say Dana White has proven his himself in the promotional game, so will likely be well aware of how his roster and backroom staff need to look when this Zuffa Boxing thing finally gets off the ground in 2020.