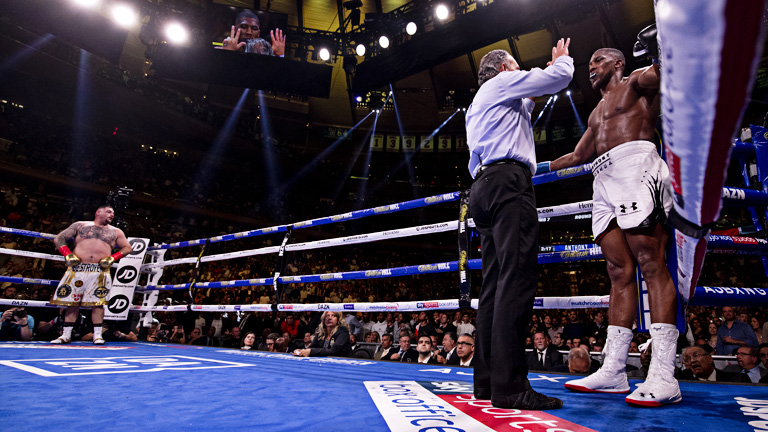 IT’S the most unconventional kind of victory, but Deontay Wilder may have brought about the downfall of Anthony Joshua without even having to put a glove on him.

The two heavyweights, at one time both champions in the division, have been linked for nearly two years now but have so far not come close to sharing a ring. They instead defended their respective titles against other opponents, all the while claiming their right to the number one spot in the division. Then, of course, just like that, they were no longer both champions.

Two weeks before Joshua lost to Andy Ruiz Jnr in New York, Deontay Wilder demolished mandatory challenger Dominic Breazeale inside a round with a mammoth right hand. Joshua watched it. He even praised it. But what he didn’t anticipate was that memories of the knockout shot – and the impact it caused on the heavyweight scene – would pollute his mind on the night he should have been thinking only of Andy Ruiz Jnr.

“In the second round I heard the crowd booing,” Joshua told JD Sports, admitting he didn’t know the true reason for this at the time.

“Someone (later) told me there was a fight going on in the arena, that’s why.

“Debut in New York, crowd’s booing. Before Wilder had knocked out Breazeale in the first round; I’m fighting two weeks after. So let’s go and handle business.

“I don’t wanna let the people down.”

Instead of letting people down, Joshua bit down, decked Ruiz and then paid the price for trading with a man well-accustomed to and better equipped for a shootout. He paid with his undefeated record. He paid with his three world titles (WBA, IBF and WBO).

Deontay Wilder, without even being present in the arena, somehow had the last laugh.

It’s probably not the high-profile pay-per-view blockbuster Chris Eubank Jnr is looking for these days, but Vincent Feigenbutz, 30-2 (27), is setting his sights on the Brighton man should he come through a fight against Cesar Nunez, 16-0-1 (8), on August 17 in Ludwigshafen, Germany.

The IBO international title will be on the line when Feigenbutz and Nunez meet and the heavy-handed German believes a victory will act as the key to unlocking a money-spinning fight against Eubank Jnr, the full IBO titleholder.

“Vincent has to take care of Nunez first, but we are confident he will live up to the ‘KO King’ nickname. Vincent is in top form, he’s highly ranked and we are looking forward to him putting on a show on August 17 and taking another step towards a world title shot.”

Feigenbutz, 23, won the WBA interim super-middleweight title in 2015 with a third-round stoppage of Mauricio Reynoso only to then lose the belt the following year against Giovanni De Carolis. He has since rebounded with nine straight wins, eight coming via stoppage, and boasts the punch power if not star power to make a match-up against Eubank Jnr an intriguing fight for a pointless belt.