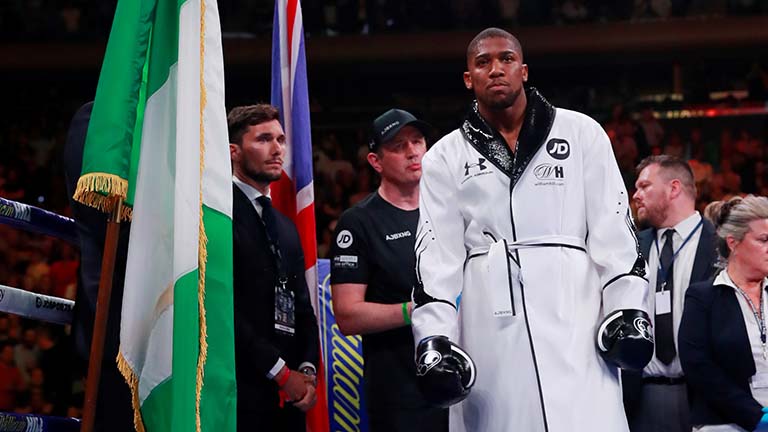 Anthony Joshua sounds open to Andy Ruiz Jnr rematch taking place in New York but would prefer Cardiff, and Horn vs. Pacquiao II could be on the cards

THE race to host the world heavyweight title rematch between Andy Ruiz Jnr and Anthony Joshua is apparently on its final lap and only two contenders remain: Madison Square Garden, New York, and the Principality Stadium, Cardiff.

It has been a two-venue race for the last few weeks, yet still we await news of a winner. From what we can ascertain, Ruiz would prefer MSG, New York, the location of the first fight, whereas Joshua, for all the reasons Ruiz wants it there, would rather the rematch be held somewhere else. He likes Cardiff and the idea of being closer to home.

“I see there’s been a lot of talking about what he wants but he doesn’t get to call the shots – it’s a team effort,” Joshua, 29, told Sky Sports. “But it’s fine. I don’t mind fighting in America as I’ve done it before and I’d love to fight here because I had no reason to go there in the first place.

“I went there off my own back so for the rematch I’d love it to be in Cardiff. Walking out in Cardiff in front of 70, 80 or 90 thousand people screaming and rooting for you to win, that type of energy that goes through your body is unstoppable.

“I think that could give me the little bit of edge I need to win those belts.

“Ruiz is the champ so he will make some calls on that situation, but I’ll battle for it to be in the UK. It’s my stomping ground. I went out there (to America) so let’s do the rematch here. I think it will be amazing before the year is out and I’ll definitely be having a lovely New Year with my family.”

Having the rematch in the UK would be a coup for British boxing and provide it with the shot in the arm it probably needs at this time. Yet, equally, the thought of Joshua returning to MSG, the scene of the first crime, and banishing his demons there would also speak to his courage and provide an additional layer of intrigue to proceedings.

Don’t completely ignore the other contenders, either. New York and Cardiff might be the frontrunners, and have been for some time, but Saudi Arabia are making up ground and doing all they can to reduce the deficit. And where there’s money, there’s often a way.

Filipino legend Manny Pacquiao has been linked to several big fights in the twilight of his career and, though it’s not one of the big ones, a left field option could be a rematch against Australian Jeff Horn.

Horn, Australia’s former WBO welterweight champion, defeated Pacquiao back when the pair met in Brisbane in 2017 and rose to prominence as a result. He ended up losing the WBO title to the brilliant Terence Crawford the following year but has since rebounded with a first-round knockout of countryman Anthony Mundine.

Now Horn is again on the lookout for big fights and his trainer, Glenn Rushton, believes a second battle with Pacquiao wouldn’t be the worst idea in the world. In an interview with FightHype, Rushton said the version of Pacquiao that recently defeated Keith Thurman was in better physical condition than the one who faced Horn and for that reason believes a Horn-Pacquiao rematch would be worthwhile.

“I think he is. I think the fight galvanised him a bit,” Rushton said. “If ever Manny Pacquiao wants that fight with Jeff Horn, I think it’s unfinished business. We’re up for it. We would certainly do it again.

“I believe the outcome will be the same, but I think it’ll be an even better fight than the first one.”

Rushton is currently preparing Horn to face Michael Zerafa at middleweight later this month, but it’s Pacquiao he wants, it’s Pacquiao Horn presumably wants, and it’s Pacquiao the entire welterweight division wants. After all, Pacquiao, though dangerous, is 40 years of age, seemingly past his best, yet still the biggest name – and payday – in the sport.