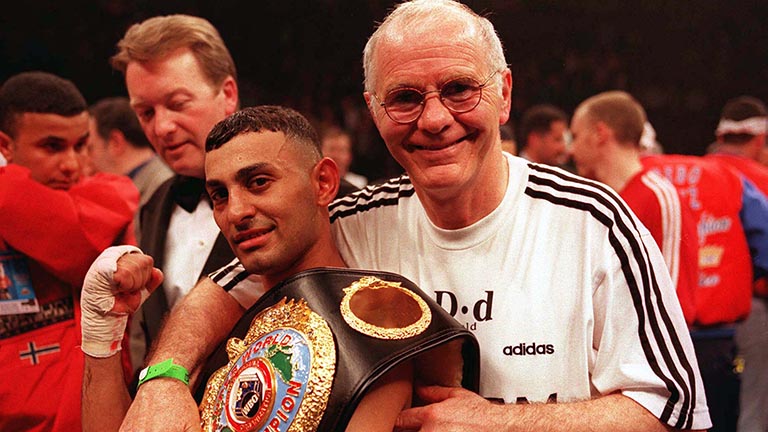 HAVING been born and raised, in boxing terms, inside Sheffield’s storied Wincobank gym, featherweight Kid Galahad doesn’t have to look far for inspiration. It’s all around him. It’s in the ring and on the bags. It’s on the walls. It’s on the end of a phone.

In recent times, Galahad has called upon the wisdom of ‘Prince’ Naseem Hamed, a former world featherweight champion and perhaps the Wincobank’s most famous export. He has done so not only because Hamed remains one of Britain’s finest ever fighters, so is always a priceless source of insight, but because Galahad’s IBF featherweight title fight against Josh Warrington on Saturday (June 15) is the most important of his career to date.

“This fight on June 15 is going to represent 14 years of hard work we have put into it,” said Galahad’s coach Dominic Ingle, son of legendary Wincobank piped piper Brendan. “Naz has been in to see Barry and made comments on Josh that I am not going to tell you, but he said some nice words to Barry and said to make sure he looks after his old belt when he gets it.

“I think Naz is going to be there on the night and it will be great if he is. We want the best Josh Warrington on the night. That is what we want.”

While their respective careers didn’t overlap, Galahad was encouraged to visit the Wincobank gym by Hamed and, like so many Sheffield youngsters, grew up idolising the former WBA, WBO, IBF and WBC featherweight king.

“I met Naz in a local mosque and he said to become world champion I need to go and find the Ingle gym,” Galahad said. “It has been 14 or 15 years since then, training every day and being hard at it. We are finally here.

“I knew the IBF are very strict so I knew this fight would be on. Frank (Warren, promoter) said I was right at the bottom of the list but look where I am now – at the top of the list.

“There were a lot of complaints from his team about things and complaining about the 35 percent split. It doesn’t matter, does it? It is my destiny and I am here now. I am going to rip that title from them in his hometown.

“All the noise just comes with the territory. If you want to be a champion, this is what you’ve got to do.”

If Kid Galahad can do something similar to Josh Warrington this weekend, the result will hearken back to the days of the ‘Prince’ and land the Wincobank gym their first world featherweight title since Hamed called it quits at the relatively young age of 28.

Claressa Shields is determined to become the fastest boxer in history to win world titles in three weight classes and it’s hard to imagine Croatia’s Ivana Habazin – or indeed anyone – stopping her from doing just that on 17 August.

The 24-year-old American has held titles at super-middleweight and middleweight and, should she beat Habazin this summer, will add the vacant WBO super-welterweight title to her collection.

Vasyl Lomachenko, another impatient trailblazer, became a three-weight world champion in only his 12th fight, but Shields, 9-0 (2), is on course to do the same in 10.

Better yet, with the fight against 29-year-old Habazin taking place in Flint, Michigan, Shields’ hometown, there’s every chance history will be made and celebrated amongst her family and friends.

“It’s hard to even put into words how excited I am to be returning home as undisputed champion and fighting in front of all my fans in Flint,” said Shields, a gold medallist at the 2012 and 2016 Olympic Games and owner of all four world middleweight titles.

“And having the opportunity to become world champion in a third weight division faster than any man or woman in boxing history will make August 17 a night I will cherish forever. It’s another big step forward in lifting women’s boxing on the road to equality.”

Interestingly, Shields’ pursuit of equality in her sport is aided in part by her lack of equal in more than one weight division. After all, at both middleweight and super-middleweight, she has been too good for every opponent she has faced and lost barely a round, never mind a fight.

And there’s no reason to think things will be any different at super-welterweight, either.