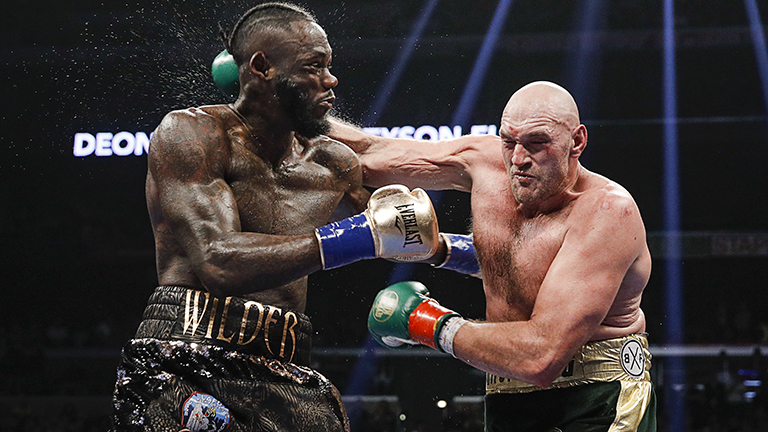 'SugarHill' Steward says the link-up with Tyson Fury was always destined to happen, and Julio Cesar Chavez Jnr fears none of the super-middleweight champs

TYSON FURY’S new trainer ‘SugarHill’ Steward, formerly known as Javan ‘Sugar’ Hill, says their link-up feels like it was meant to be and believes his new charge can stop Deontay Wilder when the pair renew acquaintances in 2020.

Steward has now been confirmed as Fury’s latest trainer, following the former heavyweight champion’s split from Ben Davison, and the move means Fury will once again find himself in Detroit, the city in which he spent the best part of a year almost a decade ago.

“He wanted a trainer who was technical,” Javan told Sky Sports. “He wants to be very technical. We will work on his technique. These are the characteristics he was looking for when he called me, and I fit the description.

“It all happened so fast. Initially he spoke to me about coming into camp, then I heard Ben Davison is gone and I’m the head trainer.”

The split from Davison came as a surprise not only to Steward but to anybody who had followed Fury’s progress in the last couple of years. It was Davison, after all, who was credited with getting Fury in shape again following two and a half years in the wilderness, and Davison who then led him into fights against Sefer Seferi, Francesco Pianeta, Deontay Wilder, Tom Schwarz and Otto Wallin.

Now it will be a different man cornering Fury when he finally rematches Wilder for the WBC heavyweight crown.

“Both guys are big punchers, but Wilder is bigger. He is a beast of a puncher,” said Steward. “But one punch changes a fight, and this is why the heavyweights are the big daddies of them all.

“(A knockout) is always the plan. Why think anything less?”

The first time Fury visited the Kronk gym, Javan was working alongside his uncle, the great Emanuel Steward. And so impressive was Fury during his time there, Emanuel claimed he would one day be the heir to Wladimir Klitschko’s heavyweight throne.

“This isn’t a brand-new start,” said Javan. “I’m somebody that he is familiar with.

“I’ll never forget that (Fury’s time at the Kronk gym). You don’t forget a person like him. Big, loud, funny and could back it up in the ring.

“His athleticism was crazy, and his spirit was beautiful. He wasn’t arrogant, he was appreciative.

“What did I see in Tyson? How he thinks, how he treats other people, his character, what kind of person he is. It’s not just about training a fighter’s skills.He has qualities that you only see in people every so often.

“We lived together for one month – me, Tyson and Emanuel. We had good and memorable times. Now, the boys are back.

“Emanuel would be proud. He probably saw this coming.”

If he did, Manny was the only one.

It’s bizarre to think Julio Cesar Chavez Jnr has been a pro for 16 years and competed 56 times yet is still only 33 years of age.

Now surely in the final chapter of his fighting career, Chavez takes on American Daniel Jacobs on Friday in Phoenix, Arizona, and says he is intent on righting wrongs and fulfilling his potential as a super-middleweight.

“This is the right fight to get me back to the top,” said Chavez Jr, 51-3-1 (33). “It’s a big risk because of the activity he’s had, but I am not a stepping stone for him. I am ready and I need to win the fight and I know I have the skills and the heart to win.

“There are a lot of good fighters out there at 168lbs; not big names but strong guys. I feel I can beat them all and with the right decisions I will get there. That starts with a win over a great fighter like Jacobs. I am a fighter and I take the risks. Now I am doing things right.

“I think this is my time, and now I need to take the next big step. It’s going to be a good fight for the fans and after that I’ll be ready to win another world title. This feels like a world title fight as Danny is a true champion and so am I.”

Currently holding world titles at super-middleweight are Britain’s Callum Smith (WBA) and Billy Joe Saunders (WBO) as well as David Benavidez (WBC) and Callum Plant (IBF). Fair to say, then, that although Chavez Jnr has no doubt seen better days, so too has the super-middleweight division.