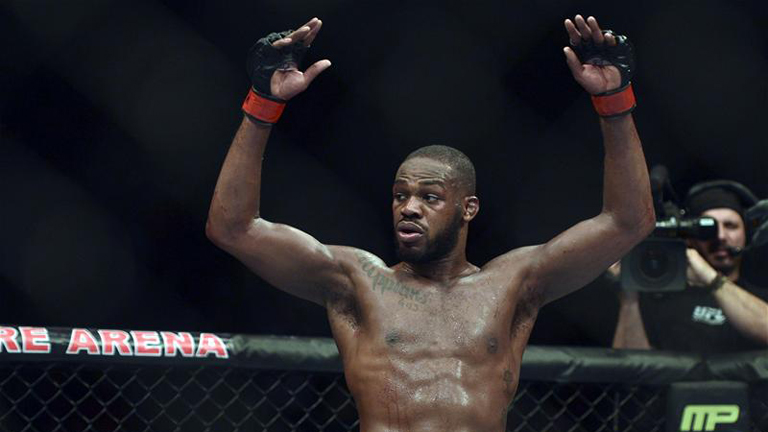 JON JONES might be the most gifted mixed martial artist in the history of the sport, but, because of his chequered past, his failed drug tests, and his all-round unreliability, it’s hard to say for certain.

Similarly, Jon Jones might either be serious when he says he’s considering a boxing match against Anthony Joshua or Deontay Wilder, the two current world heavyweight champions, or he might just be saying stuff for the sake of it.

The sensible approach, of course, is to lean towards the latter of those two possibilities. But he’s talking about it all the same.

“Right now, my mindset is more about making money,” Jones told RT Sports. “I watched Conor McGregor fight Floyd Mayweather, and it was high-risk, high-reward. There’s a saying: ‘Scared money don’t make money.’ I’ve got to be brave when I get back in the game and start challenging guys that I could possibly lose to, because that’s what people want to see.

“Jones versus Anthony Joshua, or Deontay Wilder, you know, that’s what people want to see.”

They don’t really, though, do they, Jon?

Indeed, if Mayweather vs. McGregor proved anything last summer it was that the fantasy of a combat sport super-fight is something enjoyed only by those with limited knowledge of combat sports.

The evidence, if required, was provided by the nine-and-a-half rounds Mayweather and McGregor shared (shared in every sense of the word), and now, 13 months on, not only is there zero demand for a rematch, or another hybrid fight, but Jon Jones, this talented light-heavyweight who has just had a four-year suspension (for failing a performance-enhancing drug test) cut to 14 months by USADA (United States Anti-Doping), is hardly a prime candidate to change anyone’s mind.

Rocky Fielding, the new WBA ‘regular’ super-middleweight champion, doesn’t know the identity of his first challenger yet, but does know he’ll be boxing again in December.

The hard-hitting Scouser dethroned Germany’s Tyron Zeuge in July, upsetting the odds in the process, and has since seen a one-fight option with Zeuge’s former promoters, Sauerland, expire. This means Fielding can “move on” and has created an opening for him to return to the ring again before the year is out.

“I’ll be out in December – we’re just waiting to see who and where,” he told Sky Sports. “I’m happy to take on any of the big names. I know next year will be huge with the World Boxing Super Series finishing and everyone back in the mix.”

Naturally, Fielding will keep half an eye on Friday’s World Boxing Super Series super-middleweight final between George Groves, the WBA proper champion, and Callum Smith, his local rival and old nemesis. But it’s James DeGale, the former IBF super-middleweight champion, who most appeals to Rocky at this stage.

“DeGale’s name has been mentioned to me and I’d fight him in a heartbeat,” the 31-year-old said. “I’d love that to get made for December.

“He’s a former world champion, an Olympic champion and a good name with a good record.

“I heard that he’s looking to get it on with Chris Eubank Jr, so I can sit back and then maybe get the Smith-Groves winner.

“I’m at this level now and want to stay here against top-level fighters.”

There can be no doubt Fielding, buoyed by a career-best win in July, seems a new and improved fighter under the tutelage of Jamie Moore, and if there’s one thing history has taught us, it is this: it pays to be a British super-middleweight in a division chock-full of them.