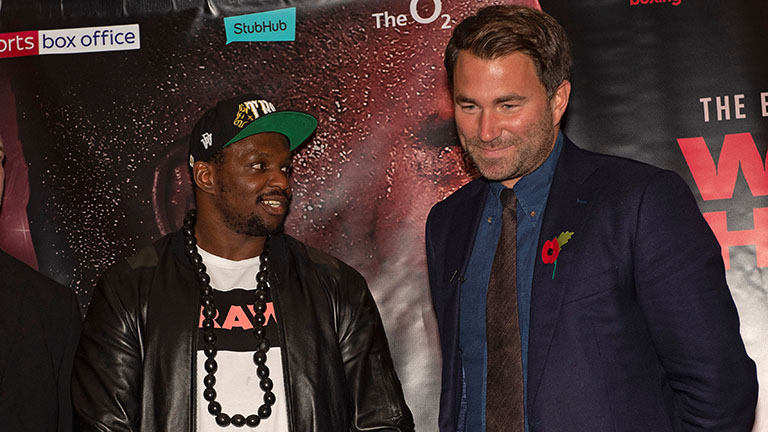 ACCORDING to promoter Eddie Hearn, leading heavyweight contender Dillian Whyte has a five-man shortlist for a scheduled fight on July 13.

Thought to be on this list are the likes of Alexander Povetkin, Manuel Charr and Luis Ortiz. Omitted from it, however, are Dominic Breazeale, a one-time potential Whyte opponent who was bumped up to challenge Deontay Wilder in a WBC heavyweight title fight, and Anthony Joshua, the old rival with whom Whyte was expected to share a Wembley Stadium ring this year.

“We’re waiting on a decision from the WBC at the moment,” Hearn, Whyte’s promoter, explained at the weigh-in for Anthony Crolla’s world title fight against Vasyl Lomachenko.

“Everybody knows there was a meeting in London some weeks ago. We expected the decision last week. It could come this week.

“Plans are in place for his July fight already, so we’re also keen to know that we’ll get what we requested from the WBC.

“Once we know what that is, and hopefully we will know tomorrow, we’ll be in a position to announce his next fight and look at his plans in more detail.

“There’s probably about five options for Dillian in July. He wants to have a mandatory, even if he’s mandatory for the winner of Wilder-Breazeale. He wants a proper fight, and that’s Dillian Whyte all over.

“They’re all good fights, the names were looking at. And once we get that ruling, we’ll be pulling the trigger and making an announcement.”

Whyte was last seen in a ring in December when going toe-to-toe with Dereck Chisora at London’s O2 Arena. He left that one late, ending a fight he was losing in the penultimate round and doing so in spectacular style.

Let’s hope he doesn’t leave his next move, a vital one, too late.

Scott Quigg has his sights set on becoming a two-weight world champion but first needs to continue his recent good form against Jayson Velez in Inglewood, Los Angeles on April 26.

Should he come through that unscathed, the Bury man, now based in LA, will be targeting a shot at IBF super-featherweight champion Tevin Farmer, a skilful American last seen stopping Ireland’s James Tennyson in five rounds.

“Tevin is a very good fighter, one I’ve watched for a long time,” Quigg, 35-2-2 (26), said. “He’s come up the hard way with four losses as he was matched tough early on. He does everything well, but it’s a fight I would jump at as I believe I have got the beating of him.

“I think I can fight for a title this year. Get a good win over Jayson on April 26 and I believe I’m ready. If I have to have another fight before then so be it, but 2019 I want to win a world title again.”

Now training with the esteemed Freddie Roach, Quigg, a former WBA champion at super-bantamweight, looked back to something like his best in October, when registering a second-round knockout of Mario Briones in Boston.

After the finish, he stuck around to watch Farmer defeat Tennyson on the same card and imagined one day taking the IBF title from the Philadelphian. All in good time, he then told himself. All in good time.