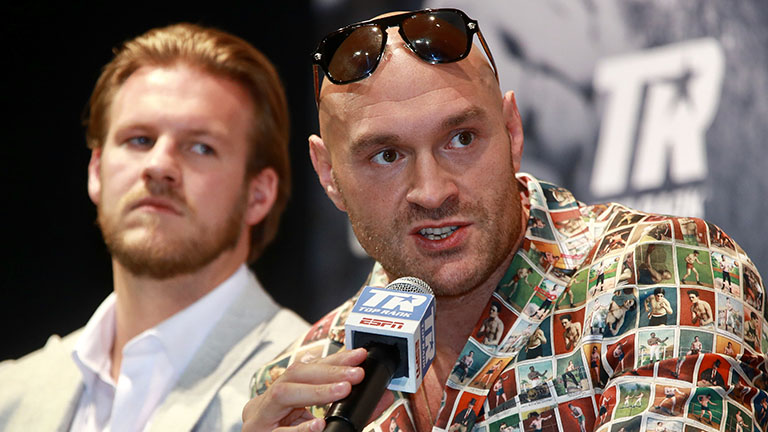 The Joshua-Ruiz rematch looks to be heading to America, Hearn on Tyson Fury, Joe Joyce's path through boxing, Khan thinks he can get Pacquiao fight later this year and Joe Gallagher the promoter. Terry Dooley rounds up today's boxing news

THE heavyweights continue to dominate the headlines now that the division has had a fire lit under it following the recent return of Tyson Fury and Anthony Joshua’s shock defeat to Andy Ruiz Jr., not to mention the hot streaks that WBC holder Deontay Wilder and the organisation’s long-suffering, top-ranked contender Dillian Whyte are currently enjoying.

Eddie Hearn’s main concern is securing a rematch between Joshua (22-1, 21 KOs) and Ruiz (32-1, 22 KOs), which is expected to take place in the boxing backwaters of America rather than in front of a packed house here in the UK. The post-Brexit madness that made too many British fans, and a few too many so-called experts, argue that the UK had a case for stating that it was the centre of the boxing world has subsided and the rematch looks likely for New York later this year.

Indeed, Hearn has told Kugan Cassius of iFLTV that going into the rematch without the pressure of being asked about Fury and Wilder will lift a weight from Joshua’s shoulders — although in practical terms maybe reducing a little muscle mass might be a better move from Team Joshua as his stamina has looked suspect at times.

“This rematch is going to be massive, and how exciting is this going to be?” asked Hearn. “I spoke to AJ the other night and said to him; ‘Don’t you think it’s weird that every fight you’ve had since the [Wladimir] Klitschko fight, everyone’s talking about the fight after. This is the first fight you’ve had since Klitschko that nobody is talking about the next fight’.”

He added: “He said it’s quite refreshing. To be honest, I didn’t know what we were going to do in December. Maybe that’s me trying to talk myself into thinking positively about the situation, but I don’t think negatively about situations.”

Joshua and Hearn might not be talking Fury and Wilder for the one after next, but, in the same interview, Hearn couldn’t resist dropping the F-bomb as he explained why he had turned down a deal to sign Fury (28-0-1, 20 KOs) when the former world Champion made his return to the sport last year.

“I could have quite easily signed him,” said Hearn. “He probably won’t admit that. We were arguing over what was not a lot of money at all. Other than when that person asked me about it the other day, I have not thought about it once. Once it’s done, it’s done.”

Hearn clearly hasn’t given the matter much thought, especially after Fury and Wilder stole a march on Joshua by fighting to a draw in December of last year, which is something that the promoter rarely talks about, adding: “I’ll tell you the reason I didn’t [sign Fury], it’s because I had to give him two fights, just as Frank [Warren] did.

In the meantime, all roads lead to WBA Super World, IBF World, WBO and IBO holder Ruiz, who will benefit massively from his upset win at the “Mecca of Boxing” should they agree terms for a return this winter.

We forget that some boxers do not watch boxing and are not too keen on the sport. For some fighters it is a job, and this is the case for Joe Joyce (9-0, all by stoppage), who has told talkSPORT that he stumbled into boxing after completing a degree in fine art and that his initial plan was to engage in martial arts training.

“I did my dissertation at Middlesex Uni and instead of going to my graduation, I already had flights booked to China,” he revealed. “So I went to China and I was doing Shaolin Kung Fu in a Shaolin gym. But then after all of that, I finally came home and decided to really knuckle down on the boxing.”

Indeed, the 33-year-old admitted that although he likes fighting he can take or leave the sport that is making him a household name. Depending of course on the household and whether they have access to BT Sport — he meets Bryant Jennings on that channel at London’s O2 Arena on July 13.

“I was never into boxing,” admitted Joyce.  “I’m not really into boxing now, but I enjoy doing it. As far as heroes go, I didn’t really have any but everyone has heard about Muhammad Ali and he was kind of my mainstream hero anyway.

“It wasn’t until I got into boxing properly that I started looking at other boxers. Like I learned about Teofilo Stevenson out in Cuba, Joe Louis, then to modern day like Floyd Mayweather, Gennady Golovkin and Vasyl Lomachenko — all highly skilled.”

Amir Khan (33-5, 20 KOs) has been calling for a fight against former gym mate Manny Pacquiao(61-7-2, 39 KOs) for years and may finally get his wish. Khan meets Neeraj Goyat (11-3-2, 2 KOs) in the King Abdullah Sports City Stadium on July 12 and has told multiple outlets that he has also pencilled in Pacquiao for November 9, with Saudi Arabia once again stumping up the cash for the fight.

Khan lost conclusively to Terence Crawford last time out, and don’t let anyone tell you otherwise, but continues to draw a lot of water on the international stage and should “Pacman” defend one of the WBA’s many welterweight belts against Keith Thurman on July 20 the Khan fight could move a step closer. Although some sources claim that the fight is doable even if the Filipino loses that one.

“There’s been lots of talk about me and Manny fighting for years,” revealed Khan. “It’s a fight I’d love and now it looks like it will finally happen in the autumn. I want to get back in the mix. That’s why I took this fight so soon after Crawford. I know I haven’t got long left and I want to make the most of what’s left of my career. I’m only interested in big fights and a fight with Manny Pacquiao would be a big fight.”

The show is called “Nations Connect”. The WBC had a rustle behind the couch and came up with the WBC Pearl belt for the occasion. It will be shown live on Channel 5 here in the UK.

It is a case of Tinker, Tailor, Solider, Joe Gallagher these days as the trainer and manager has also stepped into the promotional waters with a recent show here in Manchester. Gallagher’s M22 promotions brought back Sunday afternoon boxing last week with a bill that was headlined by Stephen Smith.

Gallagher told me earlier this year that he missed the Sunday afternoon shows and that there is still a market for them, so it is fitting that his first show was a call-back to the days when Steve Wood, Wally Dixon, and Jack Doughty put on shows in the daytime.

Gallagher has told the Manchester Evening News that he is excited about his new venture and hopes to build his way up to arena shows. “Promoting is something I have always wanted to do,” he said.

“It’s something I am very proud to do. It is something I want to do every two or three months, and we are already booked in for September. Everything starts at grassroots. There are some good fighters in Manchester on their way up. Bills like these give them the chance to keep busy, keeping their momentum, growing their fan base and when the big shows come back into the town the kids have built a resume and are ready to take the next step up.

He added: “We all have goals and as a coach I have achieved those goals, now as a promoter I have goals. The first one was ticked with my first professional show on the estate I grew up on, next would be to promote a show at one of the best venues in world boxing, which is the Manchester Arena. A Manchester promoter promoting a huge sold-out event at the Manchester Arena — that is what my goal would be.”