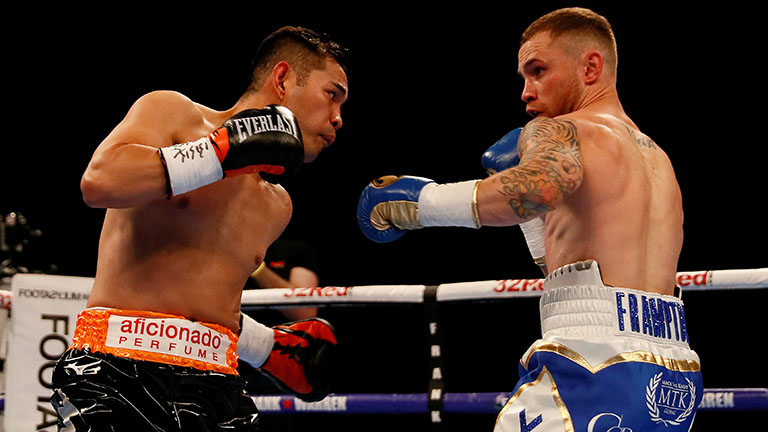 Nonito Donaire is set to fight in Belfast for a second time this year, and David Haye is looking to conquer a different kind of Goliath in 2019

Good news, Belfast fight fans: it looks as though Nonito Donaire, an adopted Irishman by way of the Philippines, could be about to return to his second home to test another of Ireland’s top fighters.

Donaire, last seen pushing Carl Frampton all the way in a thrilling 12-rounder back in April, is set to face WBA bantamweight champion Ryan Burnett in the quarter-final of the World Boxing Super Series’ bantamweight tournament and all the signs suggest the fight will take place in the champion’s home city of Belfast.

This would be music to the ears of Burnett, of course, who has built quite the fan base in recent years, but the news will also be well-received by both Donaire and the Belfast natives, who certainly forged a close bond during the days leading up to the three-weight world champion’s battle with Frampton.

Donaire told Philstar he’s “90 per cent sure” the Burnett fight happens in Belfast and said it could take place at the end of September (perhaps the 29th). With the two bantamweights having already enjoyed a double date, it shouldn’t be a hard one to arrange.

@ryanburnett_1 selected me as his pick. Its refreshing that we both agree this is a sport. This isn't street fighting. There's no need to trash talk and be a way that doesn't align to us. Make no mistake inside the ropes we will both try to take each others head off. pic.twitter.com/nubF24LAUV

“It’s refreshing that we both agree this is a sport,” said Donaire. “This isn’t street fighting. There’s no need to trash talk and be a way that doesn’t align to us. Make no mistake, inside the ropes, we’ll both try to take each other’s head off. But respect is something lacking in a sport with fools trying to make themselves relevant for the wrong reason.

“We need to bring back integrity and respect as a basic tenet of what boxing was known for as a gentleman’s sport and stop doing things for ‘likes’ and start doing things that we would be proud of as an example for our kids and the young generation.”

If only all fighters were like ‘The Filipino Flash’. Rest assured, Nonito, you’ll always be welcome in Belfast – and anywhere else you wish to grace with your presence.

David Haye has only been free of boxing a matter of weeks but already has the itch to compete again.

Thankfully, we’re not talking boxing – that mission is complete. Instead, Haye, 37, has turned his attention to poker, today revealing his plan to first learn the rules and then, this time next year, compete at Goliath 2019, the world’s largest poker tournament outside Las Vegas.

To aid his journey, Haye will be guided by Jeff Kimber, Katie Swift and Joe Beevers, three UK-based professionals, and is said to be keen to work with actors, mathematicians and psychologists in the hope of forging his “own style”.

“I come from the boxing realm and will be going into the poker realm,” Haye said at a press conference in Coventry.

“It’s about accepting the fact that I’ll be pretty poor, and that every single person I’m playing with is better than I am.

“In sport, if you’re sometimes bigger and stronger than other people, that’s enough to get you by. But I can’t use my physicality to fast-track me.

“It’s not about how quick I am or my reflexes. It’s about learning the bread and butter of poker correctly from the very beginning.

“My biggest challenge is facing that, opening my arms and saying, ‘Help me. Give me as much knowledge as you can.’ I can’t rush.

“Right now, I don’t know the rules of poker and that means I can learn the foundations from the best and move forward quickly. I’m such a novice, so I have to focus on the fundamentals.”

Haye’s decision to retire followed a fifth-round stoppage defeat to Tony Bellew back in May. Dropped three times, and unable to explode and punch the way of old, he bowed out on a note of bravery rather than one of success.

With the fire still burning, though, he’s clearly not yet ready to wave goodbye to competition.

“I don’t want to embarrass myself in a year’s time. That’s not why I’m here. I want to sit down with confidence and will enter the tournament to win.

“Everyone is thinking I don’t have a chance. OK, keep thinking that, but I’ve always found a way to overcome stuff. I will use every fibre of my being to give credibility to what I’m doing.”

‘The Hayemaker’ is certainly no stranger to gambling. He took plenty of risks in his 16-year pro boxing career, often spoke about “rolling the dice”, and now says his approach to poker will likely end up mimicking his approach to the sport that has ultimately defined him.

“I’m an aggressive counter-punching boxer, so not all out aggressive. I’m strategic; I wait for my spots. Nothing happens for a while and then bang, I throw a shot,” he said.

“I think I’ll be pretty guarded but when I see an opportunity or an opening, I’m going at it. I’m going to knock you out; take your hand.

“I thrive under pressure and I rise to pressure. Going into something cold has got the juices flowing. I’m champing at the bit for this new challenge.”

This time next year, however, should he fulfil his promise of competing at Goliath in Coventry, Haye faces an even sterner test of his ability to thrive in a world of make-believe. To conquer Goliath, David will need more than a stone – or, indeed, a jab and right hand. He’ll need a whole new set of skills.