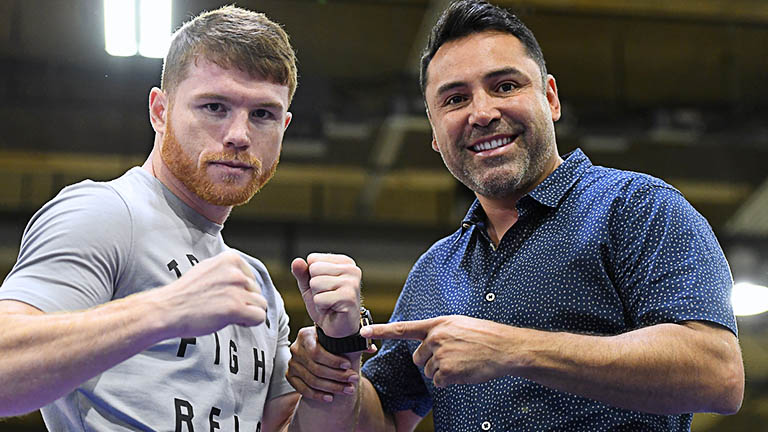 Caleb Plant won't be fighting Canelo Alvarez on May, nor anytime soon, and Gennady Golovkin is forced to postpone defence due to injury

OSCAR DE LA HOYA has hit out at IBF super-middleweight champion Caleb Plant for suggesting a potential May 2 fight against Saul ‘Canelo’ Alvarez would be too soon after his last fight for him to accept.

With Alvarez set to announce his next opponent in the coming days, it was thought Plant was one of the men being considered for the lucrative opportunity on Cinco de Mayo weekend. He, after all, along with Brits Callum Smith and Billy Joe Saunders, is in possession of something that appeals to Canelo at this stage: a world title belt.

However, when the question of facing Alvarez was put to Plant following his tenth-round stoppage of Vincent Feigenbutz last weekend, he showed little interest in opposing the Mexican, bemoaning instead the quick turnaround.

“Look, the truth of the matter is if you’re not going to want to fight Canelo, and we’re considering you, then it’s over. That’s it. It’s over.

“This is boxing. Anything can happen, but opportunities don’t come often. It’s a once in a lifetime opportunity, and he’s passing up.”

Whether Plant gets his chance again remains to be seen, but one thing seems certain: he won’t be opposing Canelo Alvarez on May 2. That opportunity will instead be handed to either Billy Joe Saunders or Callum Smith, with the former apparently close to agreeing terms.

Gennady Golovkin, the IBF champion at middleweight, has been forced not only to postpone a mandatory title defence against Kamil Szeremeta, originally planned for February 29, but also leave Victor Conte’s SNAC [Scientific Nutrition for Advanced Conditioning] program.

The postponement of the Szeremeta fight is apparently due to a right calf injury, while the decision to leave the SNAC program came about because Conte himself asked Golovkin to go.

“We did our best to help Gennady, but he was simply not able to do what we asked him to do,” Conte told ESPN. “In short, I asked him to leave our facility because he did not comply with what we had agreed upon before camp started. However, I do wish him good luck in the future.”

Golovkin, now 37, hopes to be able to rearrange the fight against Szeremeta for some time in May or June. It is not yet known where he will next go to train.