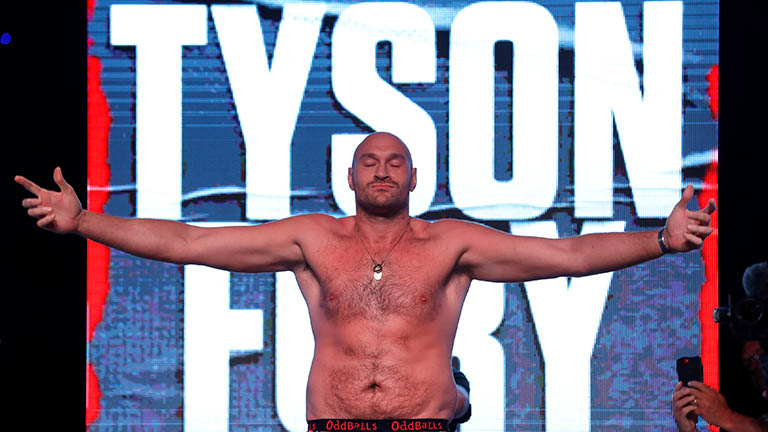 Tyson Fury's fight with Otto Wallin wasn't the one his coach wanted, and Billy Joe Saunders looks to kick-start his career with Matchroom

IT’S not Tyson Fury’s fault he’s having to fight unknown Swede Otto Wallin on September 14 in Las Vegas. It is, according to Fury’s coach, Ben Davison, everybody else’s fault – chiefly, the other heavyweight contenders who turned down the opportunity.

Placed towards the top an admittedly crowded pack, Fury has seemingly had to settle for Wallin after being unable to come up with anybody better.

“You’ve got Al Haymon [at] PBC, you’ve got Top Rank, DAZN with Joshua and that,” Davison told The Express. “They all want to keep their heavyweights for who they’ve got. I know that [Kubrat] Pulev is in a situation for the IBF mandatory, he’s not going to take that fight [against Tyson Fury], didn’t want to take that fight.

“An offer got put out to Alexander Povetkin – he took the Hughie [Fury] fight. It’s difficult. Tyson said that he wanted [Jarrell] ‘Big Baby’ Miller – he wasn’t going to get his licence in time (after a drugs offence). He then said Trevor Bryan, who signed to fight Manuel Charr. It’s very difficult.

“Adam Kownacki, he’s with PBC. Obviously [Anthony] Joshua and [Andy] Ruiz are having their rematch. It was difficult. Luis Ortiz and Deontay Wilder [are having a rematch]. It’s no secret that Tyson and Deontay are looking to fight in the early part of next year. So it wasn’t the be all and end all because the big fights are around the corner.”

If the big fights are “around the corner”, what exactly is the point of scraping the barrel, so to speak, in order to find and settle for Otto Wallin? Does beating Wallin mean a thing in 2019? Is the effort of being turned down, frustrated and seemingly shunned by other heavyweights – more viable ones than Wallin – worth the end reward on September 14?

Perhaps, given the nature of Fury’s ESPN deal, it is. Perhaps, in selecting the most straightforward option available and ensuring what appears to be an easy payday, that’s precisely the point. After all, Tom Schwarz, was just as unknown, and just as poor an opponent, but that didn’t stop Fury performing, impressing and making good money for what was always destined to be a farcical match-up.

According to ESPN and other outlets, Billy Joe Saunders, the current WBO super-middleweight champion, has signed with Matchroom Boxing.

The deal is set to be announced at a London press conference tomorrow (August 13) and comes after Saunders earlier this month parted ways with Frank Warren, the promoter responsible for guiding him to world titles at both middleweight and super-middleweight.

Saunders, 29, is a former Olympian whose career has stagnated in recent times following a performance-enhancing drug test issue towards the end of 2018 and the subsequent disposing of his WBO middleweight crown. He has since moved to 168 pounds and won a version of the title there but could do with a big fight or two to revitalise a once-promising pro career.

The good news is this: though it remains to be seen what path Saunders, 28-0 (13), will now take, there is a far greater chance he ends up facing Liverpool’s Callum Smith, the WBA super-middleweight champion, than there would have been if he had remained with Warren. Whether next, later this year, or in early 2020, the prospect of Smith vs. Saunders is as good a reason as any for the Hatfield fighter to align himself with the same promoter.