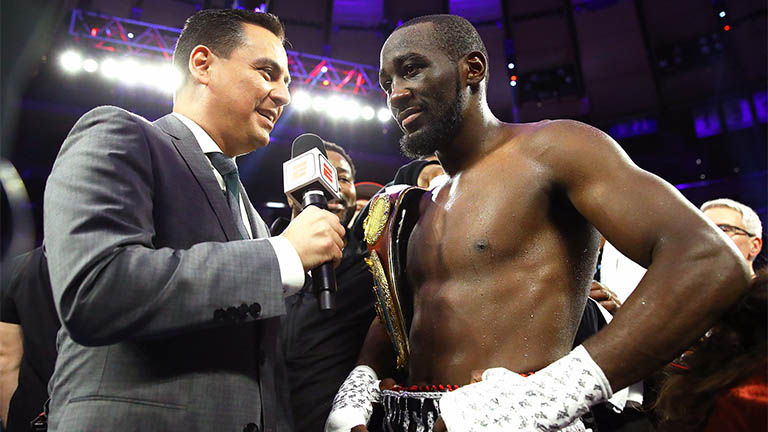 Terence Crawford takes aim at fellow welterweight champion Errol Spence Jnr, and Tim Tszyu confirms he is ready to be let off the leash in 2020

WERE it not for a car crash, a welterweight showdown between world champions Terence Crawford and Errol Spence Jnr would undoubtedly rank high on most people’s ‘Potential Fights of 2020’ lists.

It is a meeting of champions, a meeting of fellow Americans, and a meeting of undefeated fighters, arguably two of the best, pound for pound, anywhere in the world right now. It is the test they both need; the career-defining fight they both need. It should, for a whole multitude of reasons, happen sooner rather than later.

Yet there is just one problem: that crash.

In truth, Errol Spence is lucky to be alive, never mind walking, talking and once again riling Crawford, his main welterweight rival. That he is doing all these things seems nothing short of a miracle.

However, the reality of his situation is this: Spence, based on a recent interview with Brian Kenny on a FOX broadcast, is perhaps further away from fighting again – fighting anyone, not just a fellow champion – than his fans, and Terence Crawford, would like.

That said, Crawford still can’t shake Spence from his mind, nor refrain from calling him out to begin 2020.

Posting on Twitter, Crawford, the WBO welterweight champion, wrote: “Keep defending him because I’m tell all y’all now and I mean what I say when that day come when I knock him all I want all y’all to keep that same energy because he gone cry in the car he wasn’t built for this shit I got over here. Just watch me show the world. And stop using the f**king promoters, managers and advisors for that weak ass excuse y’all doing. They work for us. Y’all dumb mf. If you really want a fight you tell them ‘I don’t give two f**ks, that’s who I want to fight.’ Let yo nuts drop. You say you yo own boss, ErrolSpenceJr.”

It’s somewhat muddled, yes, but the overarching theme of the message is clear enough: Terence Crawford’s sympathy towards Errol Spence Jnr has run its course. They are, it seems, very much back to being welterweight rivals.

As we enter a new year and decade it sounds strange to imagine the name Tszyu being attached to a world championship belt again.

However, if Tim Tszyu, son of Kostya, gets his way, this is precisely what will happen in 2020.

“In 2020, I want a world title,” Tszyu told the Herald newspaper. “I want a world title, international-ranked opponents. I want to get to that number one stage. I’ve got a great promoter; we’ve got fight dates. It’s about climbing the mountain. The world champion is who I want.

“We’ve got the right people behind me, I’m confident in my ability and I know where I have to go. I would love to bring a mega-fight, a world title fight, to Australia.”

Tszyu, still only 25, is currently undefeated in 15 professional fights and is a fighter refreshingly active by today’s standards. In 2019 he fought four times, each fight a solid test, and was last seen stopping fellow Aussie Jack Brubaker inside four rounds to retain his IBF Australasian super-welterweight title, whatever that means.

Certainly, based on evidence so far, Tim Tszyu would appear good enough to win better titles this year. But whether he is capable of replicating the success of his father, an undisputed junior-welterweight world champion, remains to be seen.