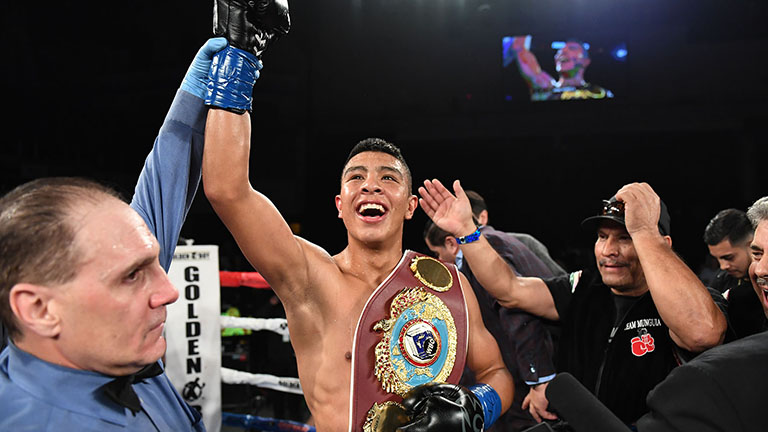 Brandon Cook's patience is about to pay off, David Price returns against 'Big Sexy', and Deontay Wilder is backed to beat Tyson Fury in December

Remember when Mexico’s Jaime Munguia was touted as a possible replacement opponent for Gennady Golovkin in May but managed to dodge that bullet and end up facing Sadam Ali for the WBO junior-middleweight title instead?

That he missed the Golovkin opportunity – it went to Vanes Martirosyan – worked out pretty well for Munguia. He destroyed Ali in four rounds, became a world champion at the age of 21, and was quickly earmarked as the next big thing from Mexico.

Now, ironically, the same could be about to happen to Canadian Brandon Cook, a man who last month missed out on fights in the UK against Kell Brook and Sam Eggington but appears set to challenge Munguia next month in Las Vegas.

Best of all, the fight, soon to be announced, will form part of the Gennady Golovkin vs. Canelo Alvarez pay-per-view undercard on September 15.

Well the poster should be up tomorrow but this is the news everyone has been waiting for. It’s always been a dream of mine to fight for a world title…. that dream is coming true on sept… https://t.co/EpExuWNwDn

“To be on the biggest stage… people are going to know who I am after this,” Cook told the Toronto Star.

“It doesn’t faze me. I know people are going to be booing (me). It’s Mexican Independence Day. I just want to go out there and show people why I made it to where I am.

“If I can stand in the middle of the ring and back his ass up, we’re going to see how he’s going to feel. I’m going to have to take some good shots, I’m sure, then hopefully take it to him.”

Munguia and now Cook can attest to the adage that good things come to those who wait.

Since pulling out of a July fight with a back injury, Liverpool’s David Price has been linked with a host of fights in recent weeks. Some have been risky, some have been surprising, and a couple, only a couple, have been sensible.

Today’s announcement that Sean ‘Big Sexy’ Turner will be his next opponent – in a fight set for October 5 at the Titanic Exhibition Centre – certainly falls into the latter category. In fact, given it’s been less than six months since the Alexander Povetkin knockout loss, it’s pretty much ideal.

Ireland’s Turner, 12-3 (8), will presumably still be ambitious enough at the age of 27 to give it a go and, despite being stopped in three rounds by Nathan Gorman last time out, is known for his durability.

His career-best win was recorded last December, when he travelled to Switzerland to stop Arnold Gjergjaj in eight rounds, but since then ‘Big Sexy’ has lost consecutive fights to Croatian prospect Filip Hrgovic (on points) and the aforementioned Gorman. Indeed, that Gorman defeat marked the first time he’d been stopped as a pro.

Price, of course, will no doubt look to repeat the trick in October. The 35-year-old will enjoy a nine-inch height advantage on the five-foot-eleven Turner and, with 18 knockouts from 22 pro wins, clearly hits hard enough to dispatch most heavyweights in the world. If it’s confidence and momentum Price needs, a knockout on October 5 could be just the ticket.

And finally… although they have both promised a knockout when the time comes, it’s fair to say Deontay Wilder and Tyson Fury aren’t fooling everybody.

Wilder, he of 39 knockouts from 40 fights, is usually a safe bet to end proceedings within the scheduled distance, but Fury, the mover and shaker, the better boxer of the two, is more inclined to go the long route.

This was the case on Saturday, when Fury, aware of the need to pocket rounds before a mooted November or December date with Wilder, remained in cruise control against overmatched Italian Francesco Pianeta. Patient and in control, Fury never once looked to get his 33-year-old opponent out of there, nor did he have to. The fight was won. Moreover, the bigger fight, his WBC title shot against Wilder, was within touching distance.

Still, Fury’s overall performance did little to dissuade Betway from making Wilder a 4/5 favourite ahead of their looming encounter. And, as for the knockout promise, they trust Wilder, at odds of 6/4, more than they do Fury, who can be backed at 15/4 to win inside 12 rounds.

Betway’s Alan Alger said: “Though he may not have been throwing the kitchen sink at it on Saturday night, Tyson Fury didn’t do enough to convince us that he should be favourite for the fight with Deontay Wilder.

“Wilder, although a number of his fights have been against lesser opposition, has a remarkable record, with 98 per cent of his wins coming by way of knockout, and he’s our 4/5 favourite for when the two meet in December.”