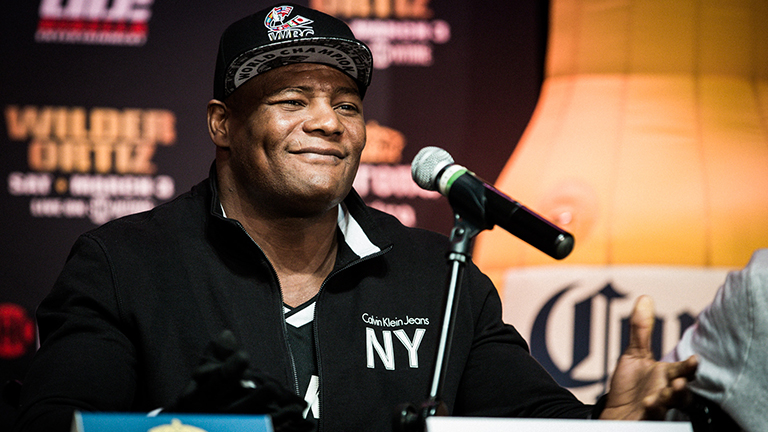 Dereck Chisora is eyeing up a money-spinning fight against former cruiserweight king Oleksandr Usyk, and Luis Ortiz has moved camp and improved his stamina

LONG portrayed as a pantomime villain, Dereck Chisora has today accused somebody else of juggling balls and running off to the circus.

The latest man to irk the heavyweight contender from Finchley is former world cruiserweight champion Oleksandr Usyk, who recently made his debut as a heavyweight and has all of a sudden appeared on ‘Del Boy’s radar.

Unimpressed by Usyk’s stoppage win against Chazz Witherspoon 10 days ago, Chisora told Sky Sports: “Him and his team need to stop juggling balls. It’s not a circus.

“Come and do what you need to do. Forget the juggling balls and dancing. Nobody wants to see a dancing show. Come Dancing with the Stars? This is a boxing match.

Because Chisora, 31-9 (22), is considered one of the smaller heavyweights in today’s scene and is these days known as a top-tier gatekeeper, it’s likely he will get his wish at some point in the future. First, though, he must get past the threat of David Price this Saturday (October 26) at London’s O2 Arena.

If unable to, accusations of ball juggling and circus shows will backfire and leave him with pie on his face. Forget Usyk, the joke then will be on Chisora.

Cuban heavyweight Luis Ortiz believes he was superior to Deontay Wilder, the WBC heavyweight champion, in all departments other than stamina when the pair met in March 2018.

Stopped in the tenth round, Ortiz claims if hadn’t ran out of gas that night he would have run away with the fight and would now be able to call himself a world champion. Lucky for him, he gets another bite at the cherry on November 23, when he and Wilder renew acquaintances with the WBC title again on the line.

“I was beating him the first time clearly but eventually ran out of gas,” said Ortiz. “This is a great challenge for both of us. I was showing superior boxing, fighting and skills. That’s the plan again this time around. I’m going to try to rip his head off and take his body.”

For the first time in his career, Ortiz has left the comforts of his home and family in Miami and set up camp in Sin City. He has also enlisted the help of Larry Wade, an assistant coach for the University of Nevada track team, who has a history of developing sprinters and hurdlers and has worked with former two-time champion Shawn Porter and current IBF super middleweight champion Caleb Plant.

Herman Caicedo, Ortiz’s current trainer, said that training in Florida had been detrimental to Ortiz, who lived ten miles away at home with his family, and that their camp for the first Wilder fight had been blighted by various issues.

“Luis came in (to the first fight) at 50-to-60%, but I won’t comment as to why,” he said. “We would just be making an excuse, and we don’t need that. We’re going to be more careful in what we’re doing. It’s being addressed. Hopefully both fighters come in at 100% and we get the nuclear explosion that we’re expecting.

“It becomes easy to take your mind off work and shoot home for the weekend and distract yourself. That’s not the case now with Luis. I, along with his co-manager, Javier Jimenez, and his nutritionist, are in his face 24-7. He doesn’t get a break. That becomes the driving fuel.”

Last time Ortiz, 31-1 (26), had only enough fuel to get him into the tenth round. But if his tank has more in reserve second time around, it could be all change at the top of the heavyweight division.