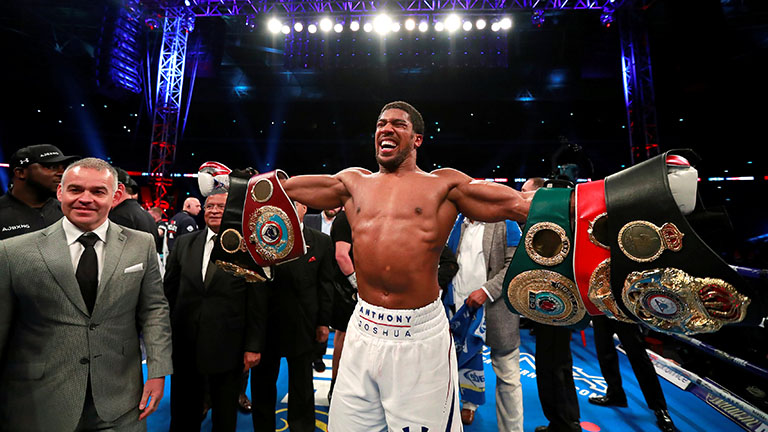 MANUEL CHARR’S reward for no longer being a naughty boy is a place in a four-man heavyweight tournament, which, in the end, will reveal the identity of a future Anthony Joshua’s mandatory challenger.

Last year the WBA regular heavyweight champion was flagged for a positive performance-enhancing drug test and that scuppered a planned September defence against stipulated challenger Fres Oquendo. Now, however, with these PED charges apparently cleared, the WBA have once again ordered Charr to defend his spurious ‘world’ title against Oquendo within 60 days.

“Ladies and gentlemen, Global Sports Management informs that Manuel Charr remains world champion. He will be defending his title against Fres Oquendo in March 2019,” a Charr statement said.

“After a positive result at a training control in late August 2018, the planned WBA title defense could not take place in September 2018.

“Now the WBA has officially declared the doping test clear for lapses. The main reason for the decision by the WBA that Manuel Charr’s sample on the scheduled day of the struggle, therefore, was “clean” and without any findings.

“This was confirmed by another test and made official.

It’s not just that. Charr’s fight with Oquendo will also form one semi-final of a tournament – a short one, immediately – used to decide a 2019 mandatory challenger for WBA, IBF and WBO world heavyweight champion Joshua. Competing in the second semi-final are unbeaten Americans Jarrell Miller and Trevor Bryan.

Miller’s promoter, Dmitry Salita, confirmed his man’s inclusion to World Boxing News, and also said negotiations for a fight between ‘Big Baby’ and Joshua, one mooted to take place in June in New York, have yet to begin.

“I have not had any discussions about a possible Anthony Joshua vs Jarrell Miller fight,” he said.

“I saw some reports about the Joshua v Miller fight being possible for DAZN in June. But I haven’t communicated with Eddie (Hearn) about this possibility.

“I have nothing to comment on at the moment.”

A South African boxer known as “Bonecrusher” was killed by a fallen tree on Sunday in Venda.

Balanganani Ndou, a retired super-bantamweight, was cutting down trees as part of his day job when one of the trees tragically fell on him, killing the 35-year-old instantly.

“His day job was cutting trees for people in Venda. I was informed that he cut one tree on Sunday and it fell on him and he died on the spot,” Ndou’s trainer Michael Phiri told Sowetan LIVE.

“This man was a bread winner for his wife and three children. What is going to happen to his family now that he is gone? This really hurts.”

Phiri retired from boxing in 2011 and said Ndou, 9-10-1 (3), had been forced to do the same because of a failed brain scan in June. His plan was to assist Phiri in training boxers. Phiri said they last spoke three days ago.

Thizwilondi Nemapandoni, meanwhile, who the last man to face Ndou in the ring, was similarly shocked and saddened by the news of his former opponent’s passing.

“I am hurting, and life has actually taught me that good people do not last long,” he said.

“Ndou was not the type of boxer who talked too much. He did not smoke or drink. Yes, I fought against him because boxing is our job. At one stage we trained together in Johannesburg. He was a decent guy.”

Sincere condolences go out to the Ndou family from all at Boxing News.