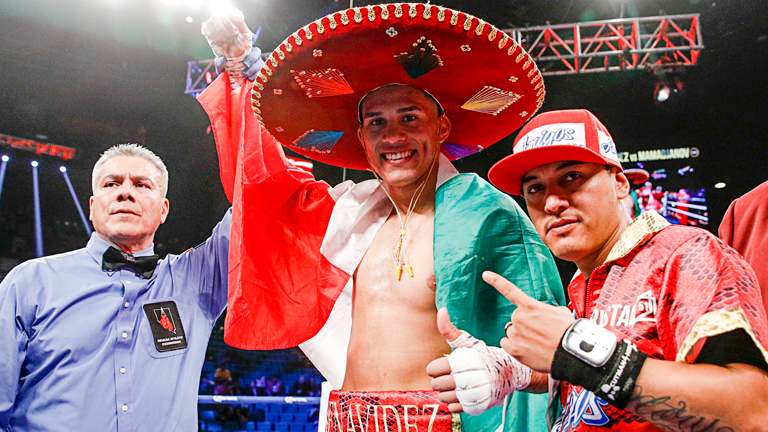 David Benavidez fails a drug test and refuses to hide, while Kevin Johnson explains how he'll shatter the unbeaten record of Daniel Dubois

A urine sample taken from WBC world super-middleweight champion David Benavidez has come back dirty, it was announced today.

The positive test was for the banned substance benzoylecgonin, an ingredient in cocaine, and Benavidez, unlike many others who find themselves in a similar situation, has been refreshingly open about his career misstep.

“I would like to sincerely apologize to the WBC for my actions,” he said on Tuesday. “I am embarrassed to have this happen. And to my all my fans that I lost the respect of, I know a lot of people won’t see me the same, but I am young and it was a mistake on my behalf.”

Benavidez, 20-0 (17), was expected to defend his WBC 168-pound title against Anthony Dirrell later in the year, but this latest twist has now thrown any such plans into jeopardy. He might avoid a ban on account of the drug being recreational. A fine, however, will probably be unavoidable.

Interestingly, while he has the option of having a B sample tested, his admission, as welcome as it is, would suggest the 21-year-old isn’t about to fight the failed test too forcefully, nor cobble together some far-fetched excuse as to why the substance was found in his system.

Honesty. A rare thing in this day and age.

Though he’s 39 years of age and 43 bouts deep into his pro career, Kevin Johnson still talks with the enthusiasm of a man half his age and can still have even the most cynical of listeners believing he means what he says.

Kevin Johnson has always talked the talk. Occasionally, he has walked the walk, too, performing admirably, upsetting prospects, and boxing behind a left jab as snappy as any in the heavyweight division. In the past, he has been considered good enough – or suitable enough – to share a ring with Tyson Fury, Anthony Joshua, Kubrat Pulev and Vitali Klitschko, from whom he attempted to snatch the WBC world heavyweight title.

But that was a long time ago. Nine years ago, in fact. Today, Johnson is gearing up for a fight against Daniel Dubois, an eight-bout novice, on October 6, and knows, at this advanced stage of his career, he’s being brought over to England for one reason and one reason only: Dubois, a London knockout machine, needs a recognisable face on his KO highlight reel.

“He’s made a good start,” said Johnson, who has lost seven of his last ten fights. “But it’s a big transition to make, especially for a heavyweight. There is always a danger that they haven’t seen what an experienced, veteran fighter can bring to them.

“Let’s see what happens when he steps into that ring against me. He’s going to feel the pressure and how does he react to that? You only know whether you can cope with going up levels once you’re in them.

“It’s a hard business, and many young prospects have faltered because they find they can’t make the next step. He doesn’t know he will make it. He can’t know.”

It’s funny. Compared to the stuff Johnson used to say when on the cusp of fighting British heavyweights, these latest quotes sound almost reserved, cautious, perhaps even uncertain. Gone are the boasts and the rhymes of fights gone by; gone is the confidence that at times bordered on delusion but had you wondering all the same.

Maybe Kevin Johnson has seen something in Daniel Dubois and knows it’s best to keep schtum. Or maybe Kevin Johnson, last seen in the UK getting beaten inside two rounds by Joshua, is all grown up.