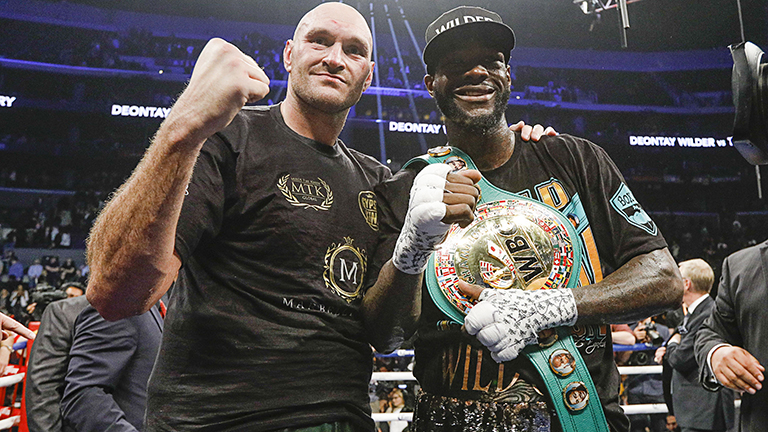 There is a feeling that the two big heavyweight rematches might not be as close to completion as we were led to believe, writes Terry Dooley

IBF World, WBA Super World, WBO and IBO world heavyweight champion Andy Ruiz Jr, 34-1 (22), and WBC titlist Deontay Wilder, 42-0-1 (40), were pundits for the US TV broadcast of Manny Pacquaio’s split decision win over Keith Thurman on Saturday night. They posed for a photo together, which Ruiz captioned ‘Two champions holding all the belts in heavyweight boxing’, leading to speculation that the two Americans may freeze out Anthony Joshua and Tyson Fury in order to unify the division.

Ruiz also used a response to his original Tweet to have a dig at Fury, who insists that he is the lineal champion and the man to beat. A fan called @tomabela11 pointed this out to Ruiz when asking if he wants to win Fury’s ‘invisible belt’, prompting Ruiz to Tweet ‘I can’t forget his imaginary belt’ alongside a face palm emoji.

Fury has been his usual baiting self when discussing his rivals recently, including casting aspersions over Ruiz’s weight, so you cannot begrudge the newly-minted title-holder for having a go back.

It is all part and parcel of the fun and games that takes place on social media. Hopefully we see something more meaningful than Tweets in the coming weeks and months: contracts, dates and venues for Ruiz-Joshua and, eventually, Wilder-Fury II would be welcomed with open arms by boxing fans. In the meantime, we can enjoy some top, top banter on social media. What more could we ask for, apart of course from the fights we crave in the rejuvenated division.

Eddie Hearn certainly thinks that there is a possibility that Wilder-Fury II could fall apart, paving the way for a crack at the full WBC title for Dillian Whyte, 26-1 (18), following his decision win over Oscar Rivas, 26-1 (18), for the interim belt.

“Anything is possible, I wouldn’t even be surprised if that fight didn’t happen,” he told iFL TV. “I just think anything is possible. Maybe Wilder gets beaten by [Luis] Ortiz? Maybe Fury decides to retire? I believe it’s a favourite that fight happens, but nothing surprises me.”

One thing that may surprise him, and everyone else, is the news that Floyd Mayweather, 50-0 (27), has been named as a “Special Advisor” to the Chinese Olympic boxing team. The Chinese Boxing Federation took to the social media platform WeChat to make the claim.

It comes hot on the heels of the superstar’s recent smash-and-grab win over kickboxer Tenshin Nasukawa in China on New Year’s Eve. It was supposed to be a gentle exhibition bout, Mayweather instead elected to batter his overwhelmed foe instead en route to collecting a rumoured £7,000,000.

The Federation claim that “Money” will ‘Use his influence and resources to support the Chinese boxing project in achieving excellent results at the Tokyo Olympics.’ Mayweather was in the country again recently to promote his TMT clothing range and, as is customary with the former multi weight world champion, he took to Instagram to flash a big wad of the local currency.

A cash rich country that is in need of a boost in certain sporting areas and an avaricious former fighter who burns through money like there is no tomorrow seems a good mix on paper. How it all turns out on canvas probably depends on how much Mayweather is paid and how much of his spare time he is willing to allot given how busy he is touring the world with his cousin Roy. It could end up in tears and tantrums, rather than garlands and golds.

Kubrat Pulev, 27-1 (14), has been given a $2,500 fine by the California State Athletic Commission and has been told he can apply for his licence again if promotes a video campaign about the dangers of sexual harassment. Pulev planted a kiss on reporter Jenny Ravalo’s lips after beating Bogdan Dinu in March, and she was then dragged over the coals in the press and on social media after footage of the incident went viral.

Ravalo immediately sought out legal action and reported Pulev, who insisted that his actions were purely due to his elation over the win. Ravalo was also incensed by Bob Arum’s reaction to the incident, telling the CSAC that: “Mr. Arum cares little about sexual harassment at all.

“He believes that a 6’ 4’’, 250lb boxer grabbing the face of a 5’ 2’’ reporter and forcibly kissing her with his bloody mouth was sexual harassment. I would like to see if he would think differently if a large, bloody man did the same to him without his consent.”

Arum was ordered to join Pulev in a sexual harassment remediation class. As mentioned above, Pulev can apply for his licence again although he has been warned that any further breaches would lead to a lifetime ban in North America.

With all this talk about what is going on in and around the ring it is nice to see that the WBC, WBA, and WBO lightweight titles are being contested by Vasiliy Lomachenko, 13-1 (10), and Luke Campbell, 20-2 (16), at the O2 Arena on August 31 (cue cries of “British boxing is taking over!”).

It is a tall order for Campbell, who will be in a similar position to the one huge underdog Kell Brook was in when he went in against Gennady Golovkin yet “Cool Hand” believes that he can spring an almighty upset.

“Power, speed, ability — this fight has everything,” he told the press when officially announcing the contest. “I’m a competitor and I want to compete at the highest level. I believe in myself and I will rise to occasion and be ready on August 31st. Vasiliy doesn’t need to talk much because the action will do the talking. You’re going to see a great fight.”

Lomachenko beat Anthony Crolla in four last time out. The Ukrainian is not the type to resort to jibes or insults, he simply stated a few facts. “He is tall, he has a big reach, he is a smart boxer and has a high boxing IQ,” he said. “He also has lots of amateur experience so maybe for me it will be a big challenge. I never think about being unbeatable. I just do my job and train hard.”

For his part, Crolla put on his biggest, brightest smile and told Sky News that he welcomed the news until he realised that he would have to see footage of himself getting stopped “Every time there is an advertisement break between now and the fight”. It is a daunting task for Campbell despite his solid recent form and it is likely to be another hard night for a British fighter vying to sit at boxing’s top table.