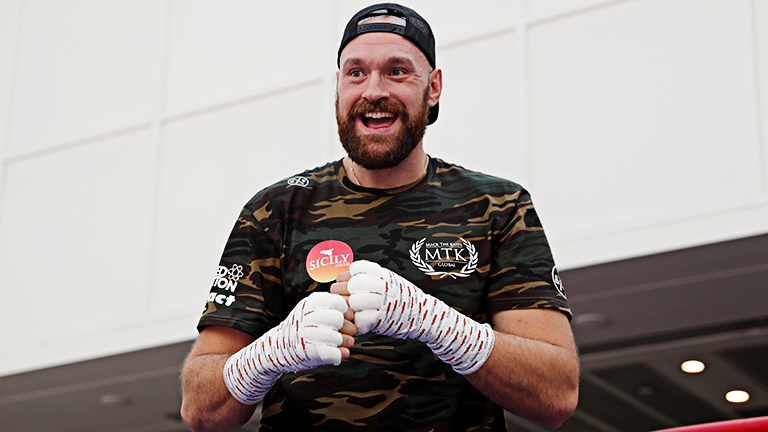 SKY Sports have reported that former world heavyweight champion Tyson Fury (27-0, 19 KOs) does not have a licence yet to box in the United States despite claiming that he intends to meet WBC holder Deontay Wilder (40-0, 39 early) in either New York or Las Vegas in November.

An announcement was expected last week, but there has been nothing confirmed and the gap between the informal pre-announcement of the planned formal announcement has led to speculation that the fight is far from a done deal, with numerous outlets also reporting that a purse split has yet to be agreed.

To that end, Sky contacted the New York and Las Vegas commissions to check on Fury’s current status only to find that the 30-year-old has yet to begin the licensing process. Fury successfully applied for a BBBoC licence earlier this year and has made two comeback appearances — a retirement win over Sefer Seferi in June and a decision over Francesco Pianeta earlier this month — yet he will have to get the ball rolling Stateside if he is to meet Wilder in the winter.

Sky signed off by reminding readers that the fight between consensus, unified king Anthony Joshua and two-time PED cheat Alexander Povetkin will take place on their Box Office platform on September 22.

You do not need to hold a professional licence to experience the life-changing effects that the sport of boxing can have on you. One of the youngest surviving victims of the Grenfell Tower inferno has revealed that she uses boxing to vent the anger and pain she feels over the blaze.

Luana Gomes suffered cyanide poisoning caused by smoke while escaping from the tower with her parents and little sister. Her mother was pregnant at the time and the baby was stillborn, officially making him the 72nd victim of the last summer’s tragedy.

Speaking to the Evening Standard about a special episode of BBC’s DIY SOS show that focuses on the restoration of Dale Youth ABC, the 13-year-old has revealed that she takes her anger and frustration out on the bags at the famous amateur boxing club. “I would get stressed and angry but I would not have anywhere to get it off my shoulders,” she said.

“I felt sick, but when I go boxing it makes me release all the anger out on the punch bags, and when I leave, I feel lighter and there are no weights on my shoulder any more.”

Dale Youth was previously housed in Grenfell Tower. It was briefly relocated to a nearby car park before the BBC’s team led its regeneration, paving the way for it to once again open its doors to members of the local community.

Former Amir Khan opponent Jackson Williams has set himself a huge task after revealing that he intends to break the world record for running across Australia as part of a charity push.

The former fighter will have to run over 25000 miles in under 67 days, the current Guinness world record, to achieve his goal. He has told the Norwich Evening News that he believes he can do it in 54 days, 60 at the most, to raise money for a children’s charity called Break.

“The run is in recognition of Break’s 50th anniversary, so I want to run 50 miles a day to mark the immense contribution the charity has made to children in Norfolk in all those years,” he said.

After undertaking a reconnaissance mission by bike, Williams knows what he is facing when he switches to foot later this year. “The cycle took me 18 days,” he added. “There’s also kangaroos, snakes and spiders. Australia has a lot of deadly species. The biggest challenge will be the heat, especially by the time I’m finishing in Perth.”

With £19000 already raised, Williams hopes to gather another £5000 before heading down under for his epic bout of roadwork.

Paisley could be due a resurgence according to promoter Sam Kynoch, who left MTK Scotland to helm his own promotional outfit. Sadly, he was not referring to the much-maligned clothing pattern, but, rather, the town of Paisley, which he aims to turn into a hotbed of Scottish boxing.

Kynoch has told Craig Ritchie of the Paisley Daily Express — a local paper, not a fashion journal — that he will bring well-matched fights and events to the Lagoon Centre, beginning with his debut solo show at the venue on October 30.

“I really like the venue and that is why we just keep on coming back,” said Kynoch. “Paisley is a real hotbed for boxing right now and there is a real appetite and hunger for the sport in the town at the moment. The Lagoon gives us that perfect base as well as it is central to a lot of the west coast boxers that we have in our stable.”

He added: “It is mutually beneficial when you have these local guys on the bill because you get the hometown crowd in and it also boosts their profile as well. We work for the boxers and it is about getting them on these bills and giving them that exposure, so of course we are always looking for talent.”

A victory isn’t always a win in the sport of boxing, especially if you upset the odds and hand a favoured prospect their first loss or on those rare occasions when journeymen start notching up a few wins.

An upsurge in form can lead to the end of those late-notice calls or frequent, sometimes well-paid, spots in the away corner, and this is what happened to Craig Cunningham (19-3, 4 KOs) after he shocked former Olympian Anthony Ogogo via an eighth-round stoppage win in October 2016.

Cunningham was worth every penny of his victory yet he was left disappointed in its aftermath after failing to secure any meaningful fights and has decided to walk away from a sport that does not garland the paths of participants lower down the food chain.

The Birmingham-based boxer fought a few middling opponents in the immediate aftermath of the Ogogo fight, and was subsequently unprepared for the challenges presented to him by Lukas Ndafoluma and Jack Culcay, who both beat him on points in his last two fights.

The 30-year-old announced his retirement on his Twitter page earlier this week: ‘Right then, the time has come to officially hang up the gloves,’ he wrote. ‘Met some amazing friends through boxing. We caused some upsets along the way.’

Cunningham had bemoaned his lot when speaking to Mike Lockley of the Birmingham Mail in December, revealing that opportunity did not come knocking after he beat Ogogo. “I always thought boxers are tough guys in a tough sport and I thought they shared my mindset,” he said.

“I will fight anyone in their own backyard and I expected other boxers to have the same mindset. I want to be in the best fights I can be in. Too many want pampered records, they don’t want to test themselves. Have I thought about just walking away? Absolutely, 100 per cent. I’m kind of thinking, ‘is it all worth it?’ It’s all politics, it’s all business…I beat him [Ogogo] and nothing happened. I’ve been left to rot.”

Cunningham is not the first boxer to walk away with a sense of anger towards the sport and he certainly will not be the last. It is no wonder that fighters who lack a big promotional push or have started to slide into the ranks of the journeymen find it difficult to change their situation or arrest that decline.