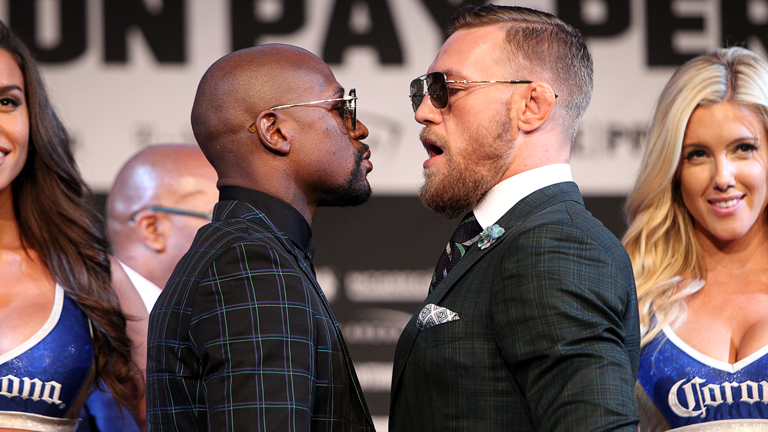 LIKE it or not, Conor McGregor is not done with boxing. He made an extraordinary amount of money losing to Floyd Mayweather in his professional debut in 2017, and confirmed to ESPN’s Ariel Helwani that he intends to return to the ring soon. Speaking ahead of his UFC return against Donald “Cowboy” Cerrone over the weekend, McGregor expressed his intention to win an actual boxing world title, and then laughed off the suggestion that he’d need to work his way into a title shot first.

Even given his star power, the notion that McGregor – a wildly successful mixed martial artist but a novice boxer at best – could actually claim a recognised strap is bonkers.

Regardless, the real intrigue came when he revealed he had “almost signed” Manny Pacquiao. Despite Helwani’s best efforts, McGregor wouldn’t detail much else. Now, this could mean McGregor came close to agreeing a fight with Pacquiao, or it could mean that Zuffa Boxing – UFC President Dana White’s vehicle into the sport – is working to sign Manny once his PBC deal is up. There’s been no confirmation that Conor will be involved in Zuffa when it officially launches, but it seems likely he will, especially if he intends to box again.

After McGregor walloped Cerrone in 40 seconds, Mayweather shared a mock-up poster for a McGregor rematch on his Instagram. In his post-fight presser, McGregor said the rematch will happen, but also doubled down on his desire to fight Pacquiao.

IFL were given access to Tyson Fury’s Top Rank camp during his preparation for the much-anticipated rematch with Deontay Wilder and received a pretty serious interview for their efforts. Having just finished a training session, Fury spoke of his intentions to seek a knockout against Wilder and also said that he will only fight three more times – against Wilder, Anthony Joshua and Dillian Whyte.

There won’t be many who believe that, but it once again suggests that Fury – having made heaps of money and with options elsewhere – has one eye on the exit door. His reasoning for wanting to fight Whyte is that Dillian has been WBC mandatory “for about 2000 days” and deserves a world title shot.

He briefly touched on his split with Ben Davison, but didn’t reveal anything about the reasoning behind it, except that he felt he needed a change. He did mention how Davison is out in Dubai with Billy Joe Saunders and that Ben can’t keep flying all over the world, so it might have something to do with location, but it’s likely we’ll never find out for sure what happened. Earlier in the week IFL interviewed Davison, who said he and Tyson remain friends, but also chose not to go into detail about the split.

Fury actually came face to face with Wilder for the first time since their first fight as the pair took part in what will be the only press conference for the rematch until fight week. The promotion has been a muted one so far – this media event certainly didn’t produce a huge amount of content. It’s telling that one of the main headlines coming out of it was Fury, sinking to new depths with his fairytales, claiming to Manouk Akopyan that he’s currently masturbating seven times a day in order to keep his testosterone levels up. Wilder’s response? “He better use thick lotion.”

That being said, during the press conference Fury spoke about how he doesn’t expect to get a decision victory in the US and claims this is partly why he split with Davison.

While it’s true that a fight this big sells itself, it seems a missed opportunity to not get these two out in the media more. ESPN – who will air the fight in the US alongside FOX – produced an insane amount of content for McGregor-Cerrone, so it will be interesting what is done for Wilder-Fury as it draws closer. It’s been confirmed that BT Sport will air in the UK on pay-per-view.

Eddie Hearn has made a “seven-figure offer” to Andy Ruiz for him to fight Whyte, the promoter told Matchroom Boxing’s YouTube channel. That must be encouraging for Dillian, who had a tumultuous 2019, but something about rewarding Ruiz’ blubbery display against Joshua last month with another huge payday doesn’t sit right.

Kubrat Pulev remains the favourite to challenge Joshua next and, according to some strange reports coming out of Pulev’s native Bulgaria, the fight will take place in Istanbul, Turkey. Pulev shared stories on his social media which claim he’ll fight Joshua in May at Besiktas FC’s Vodafone Park stadium. That seems … unlikely.

ESPN reported that Ice Cube has been cast in the upcoming Universal movie based on the Claressa Shields documentary T-Rex. It’s further evidence that Shields is crossing over into the mainstream, certainly in America.

Speaking to talkSPORT’s Fight Night show (technically a radio show but it’s turned into a podcast each week so I’m counting it), Fury gently let down the few dozen people who wanted to see him compete in MMA.

“I would fight an MMA fighter, but not in a wrestling match, in a stand-up fight.” he said. “We could go into a cage and put cage gloves on. If they wanted to kickbox, but I don’t recommend that with a giant with long legs.

“Whatever they wanna do. As long as it’s not grabbing to the floor and all that. I don’t like all that stuff.”