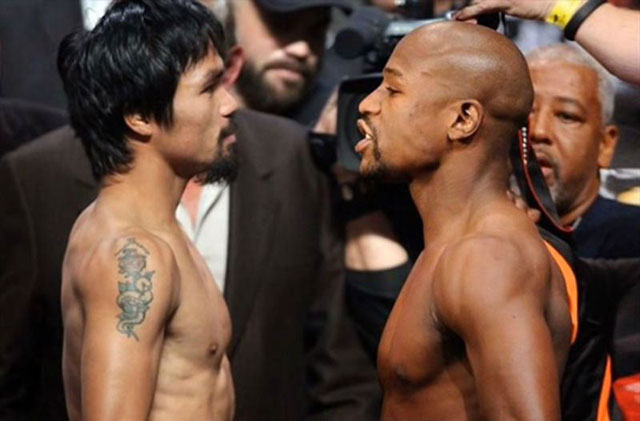 FLOYD MAYWEATHER calls himself ‘The Best Ever’. Manny Pacquiao lays claim to being a world champion in eight different weight classes.

For five years, their inability to meet one another in the ring has driven fight fans around the bend.

Cynics gave up on it a couple of years ago but seeing as it’s still by far the highest-grossing event that can be made in the sport’s history it seems to still be in play.

Debate was reignited last month, when Mayweather called Pacquiao out on a Showtime broadcast, although he did so with conditions about money and the network it would be show on.

Pacquiao and his team still insist they want the fight.

If both sides want it, it should be easy to make, right? Wrong.

“It’s very complicated,” said Oscar De La Hoya, who has promoted Mayweather’s last 10-or-so fights through his Golden Boy Promotions company. “I mean, first of all, you have one fighter with HBO and another fighter with Showtime. You have sponsors. But most importantly, you have egos and egos can get in the way of making big fights happen. I truly feel that, yes, this fight should happen, but the world will believe it when they see it.”

The WBC has also tried to put whatever clout it has towards the contest.

“The WBC fully supports the promotion of this fight which will certainly break all existing records in many areas,” said the organisation, in a statement. “The WBC has been supportive and has provided all flexibility for the fight to take place and hereby confirms that we will continue to do so. Manny Pacquiao was ranked number one mandatory challenger when he returned after his loss to [Juan Manuel] Marquez, unfortunately a different path was taken, today there is another opportunity for this fight to happen.

“We encourage all parties to sit down and make it happen, just as the Lennox Lewis vs Mike Tyson fight, which seemed impossible to be put together, they all sat down and made it happen. That fight was aired PPV by all platforms, from Showtime and HBO.”

Pacquiao’s trainer, Freddie Roach, has also got involved, brokering a meeting between his fighter’s promoter, Bob Arum, and Fred Moonves of CBS.

“Moonves was trying to get the fight together without Bob and I said, ‘No, you’ve got to get Bob involved,’” Roach revealed. “He called Bob ‘the devil’ but you know what I put them together, we had a meeting at Bob’s house. It was hard to get them together but just for that fight [they did]. I was at the meeting and if they both do what they say they’re going to do, the fight will happen. They walked out of the meeting with their arms around each other and I said look at that, maybe it has a chance. I hope so.”

Roach was last on record saying he thought it would happen.

“I hope as much as you guys that it does,” he said.

That is why it’s in demand.

Mayweather seemed to toil with the violent workrate of Marcos Maidana while Pacqiuao has looked impressive against Timothy Bradley, Brandon Rios and Chris Algieri – albeit not back to his ferocious best.

Floyd Mayweather turns 38 in February while Pacquiao was 36 last month.

Some think the slippage in their skills might lead to a fight more like the Thrilla in the Manilla than The Fight of the Century, the more physical account between Muhammad Ali and Joe Frazier as they had slowed after their first scintilating clash.

Some reckon the fight is so far beyond its sell by date it would be an equivalent of when I tired Sugar Ray Leonard fought a forlorn Roberto Duran in their tepid trilogy fight.

And, of course, others will compare it to Lewis-Tyson, where the fight is barely relevant in the grand scheme of things, even though it counts in the record books.

“They needed it four years ago,” said John David Jackson, trainer of light-heavyweight champion Sergey Kovalev. “It’s a fight that really passed its time with Pacquiao being knocked out [by Marquez] and beaten [by Timothy Bradley]. Even though I thought he beat Bradley, he lost and Floyd has slipped a little bit. Four years ago it would have been great when they were both on top of their game. Does it bring interest? A lot of people still want to see the fight. To me, it’s not as interesting as it would have been but it does bring attention. Do the people need it? I don’t know.

“I always thought Floyd was the guy to beat Pacquiao because of his style but he doesn’t have the legs he once had. Pacquiao punches in combination and a combination puncher would give Floyd trouble. It’s an interesting fight. Floyd has slipped a bit, and Pacquiao’s too nice now.”

The Filipino has not wiped out anybody early since taking Miguel Cotto out in 2009.

Between them they have not scored a stoppage in 14 fights.

Yet there is a style contrast that leads to numerous possible outcomes, even if a majority feel they would lean to Mayweather.

There is one person, however, not so keen to see it and that’s Bolton’s Amir Khan, he wants to fight the top guns.

“I would be upset,” he admitted, when asked if he could be overlooked ahead of his win against Devon Alexander, “but I’d just go back to the drawing board. I’m still young. I’ve still got big names ahead of me and maybe if they do fight I could face one of them after that.”

Many point to Mayweather’s long unbeaten record and that he wants to keep it in tact, so won’t jeopardise it against the man many thought would give him the most trouble.

Yet former light-heavyweight and heavyweight champion Michael Spinks, arguably defined by the lone loss in his career to Mike Tyson, says how Floyd is remembered would not be affected should he lose.

“If Floyd gets one defeat?” he asked. “I don’t think it would change his legacy at all. I think it would carry on and his light will shine. I don’t think my legacy was altered by my one loss, not at all. I’d had a nice strong career before the loss and at the time the guy that I fought [Tyson], he was very tough to beat by anybody. I lost to a real strong competitor.”

Would people not see him as the man who avoided Pacquiao instead?

“I doubt it,” Spinks added. “People are forgetful. They will remember for a while, then they’ll forget about it. I think it’s too late for it. It would still be a good fight but Mayweather don’t need him. He don’t need Pacquiao even though it’d be a good fight for the viewers. Right now I think Mayweather wants to retire undefeated.”

Detroit legend Tommy Hearns begs to differ. He thinks thinks Floyd should get the fight on.

“He needs to fight more guys that have the ability and the name,” said “The Hitman.” “Right now, he’s pretty much picking and choosing who he fights and he’s doing a good job. He’s undefeated. “So it’s going well. I enjoy Floyd as a boxer, he’s doing a great job. I don’t think defeat would hurt him at all because he’s done so well, a loss wouldn’t make a difference. He should fight Pacquiao.”

Hearns twice lost to Iran Barkley and the Bronx-born “Blade” ducked no-one. He doesn’t have a problem with the fight not happening.

“Floyd is the best,” he said. “He’s done what he has to do, know what I’m saying? I mean, he’s beaten everybody. The fight with Pacquiao, it should have happened long ago. It’s not gonna mean anything if he beats him now, just a few more million. He’s on top because he’s stayed undefeated while Pacquiao got knocked out.”

However, Brit bomber Nigel Benn, who steamed through Barkley in one round, thinks the fighters have run out of options.

“It’s going to happen between Mayweather and Pacquiao,” he predicted. “There’s too much money on the table for it not to. Where does he [Mayweather] go? He’s going to have to fight Danny Garcia at catchweight, or he’s got to fight Pacquiao. I don’t think he’s going to fight Amir Khan. Khan is too fast. He likes fighters who come to him and Manny does that.”

If Mayweather lost, Benn agrees with others who gambled their records against top fighters. He doesn’t think it would change a thing if there’s an ‘L’ on his resume.

Someone whose legacy is “already there” is Sugar Ray Leonard, one of the greatest of all time.

Mayweather calls himself TBE, ‘The Best Ever’. Leonard does not challenge the statement.

“In my eyes there was abundance of talent [in his day]. I can’t really describe what’s going on [today]. Even if Floyd and Pacquiao fought today, it would be a huge event. People want to see it. It has to happen.”

For years, experts have speculated how Mayweather in particular would have coped from the fighters from Leonard’s era, the likes of Hearns and Roberto Duran.

“Put it this way, that’s like people hypothetically saying to me, ‘Could you have hung with Sugar Ray Robinson?’ ‘Yes. I’m a fighter, I’m a champion and I believe I can beat anybody,’” he said. “If you, as a fighter, don’t think you could compete in any era, you’re not a fighter. He’s very good.”

Benn agrees, and in fact thinks Mayweather might mark an evolution of the sport from those glittering days in the eighties.

“Absolutely,” he continued. “What we’re looking at is this… Mark Spitz was a great swimmer. He couldn’t beat [Michael] Phelps and all those boys. He’d get left behind. Jesse Owens. Good runner. He couldn’t compete with Carl Lewis. Nothing goes backwards, it always goes forwards. He would have lived with them.”

The questions now remain can Mayweather live with Pacquiao, or could Pacquiao live with Floyd Mayweather.

Nonito Donaire, a rebuilding super-bantamweight who is friends with countryman Pacquiao, agrees with the majority.

“It needs to happen,” he said. “The only reason why it hasn’t happened is money. It needs to happen. You’re looking at offence and defence, the best offensive fighter against the best defensive fighter. It’s an amazing fight. It’s the World Cup, the Super Bowl, the World Series, the NBA championship, all of that put together. Everything is going to be on the line. This is going to be something people are talking about for a long time.”

An optimist would like to close on such a positive note. But the dire state of affairs over the last few years gives way to the pessimist and the final words of those are De La Hoya.

Only when the bell goes to sound round one will any of us. And even then we might have to pinch an arm to see if it’s real.

Pacquiao expects Mayweather fight to be confirmed this month