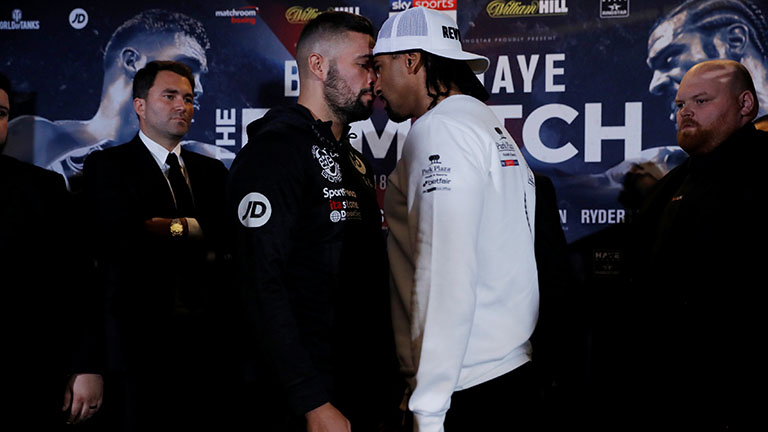 Matt Christie reveals his boxing betting slip for the weekend

BOXING betting, particularly on a night like Saturday, when Tony Bellew and David Haye go to war for a second time is a way to add extra spice to your evening’s entertainment. Perhaps you don’t like the rematch, perhaps – like me – you’re a little sick and tired of all the posturing and promises being made by two fighters who are more than likely at the wrong end of their career. However, it’s hard to deny there’s money to be made.

Not so long ago, bookmakers, perhaps preoccupied with football and racing, made some howlers in regards to the odds they put on certain boxing matches, meaning educated fans often cashed in by taking advantage of some clumsy forecasts. These days, though, it’s hard to spot a ‘bargain’ within the boxing betting markets, meaning you need to outlay a significant wedge in order to get something approaching a worthwhile return.

Therefore, the best value might be to build an accumulator and with Matchroom’s O2 bill bustling with excellent fights on the undercard – plus Gennady Golovkin’s almost certain victory over Vanes Martirosyan taking place in America a few hours later – there’s huge scope to do so this weekend.

The starting point would be to make your call on the Bellew-Haye contest, and my feeling is that the Scouser is in far better condition, both mentally and physically, to win again. It’s true that Haye was hampered by injury last time, but even in the five rounds before his Achilles ruptured, nobody would have been impressed with the former cruiserweight and heavyweight titlist’s form. Fourteen months on, and with another two serious injuries (once his Achilles healed, he tore his bicep while preparing for the rematch initially scheduled for December last year) adding extra strain to the 37-year-old’s ageing frame, it defies logic to suggest he can return to the form of his prime.

So the first bet on my accumulator would be to pick Bellew at 2/1.

Elsewhere on the bill, bantamweight Paul Butler has a difficult task against the promising fists of Puerto Rico’s Emmanuel Rodriguez and the visitor, while lacking big-fight experience, appears to have the tools to dismantle the Brit in the second half. So I’ll add Rodriguez, via KO, TKO or DQ, to my William Hill betting slip at 6/4.

Heavyweight prospect Joe Joyce is expected to defeat Commonwealth champion Lenroy Thomas, and at 1/50 to win outright isn’t overly tempting. However, he’s a decent bet to end proceedings before the final bell and Joyce to win inside schedule (KO, TKO or DQ) at 1/5 adds extra value to accumulator.

HE’S GOT THE POWER: Joyce has won all three of his professional bouts inside the distance

Harder to call is the super-middleweight tussle that pits John Ryder against Jamie Cox, but one senses Ryder’s recent form and activity against solid opponents should be enough. Therefore, Ryder at 8/11 is appealing enough without predicting mode of victory.

At super-featherweight, Martin Ward’s silky skillset looks likely to trump the heavy hands of James Tennyson, so I’ll add him at 2/7 to the accumulator, before turning my attention to Golovkin’s fight against Martirosyan in the early hours.

Middleweight king Golovkin goes into this bout unbeaten and, though past his best at 36, remains a formidable fighting machine. Martirosyan, meanwhile, hasn’t fought for two years and has fought exclusively in the weight class below. Making a case for him to win is almost impossible so “GGG” to triumph via KO, TKO or DQ is the obvious choice at 1/5.

ONE WINNER: Golovkin will be the only man smiling at the end of the contest, too

That should leave a six-fold accumulator, via William Hill, coming in at just under 23/1. I’ll make a £10 stake on that and, fingers crossed, I’ll wake up on Sunday morning with £239.84 in my pocket.

If you’re new to William Hill, your £10 outlay will result in the exceptionally appealing £30 in free bets which could be put to good use ‘hedging your bets’.

Perhaps David Haye can land that Hayemaker of old, for example. If that happens, it’s likely early, so back the favourite at 13/2 to win in the first three sessions. Alternatively, Bellew has been known to be dropped early yet come back to win, and not wholly unlikely here considering Haye’s fragile body, so the special bet of the Scouser to hit the canvas but still emerge triumphant at 7/1 is worth looking at.

Elsewhere, while John Ryder is the favourite, it’s far from certain. Jamie Cox to win inside schedule at 3/1 is another worthy destination for some of your free bets.

Finally, only bet what you can afford to lose and most of all, good luck!