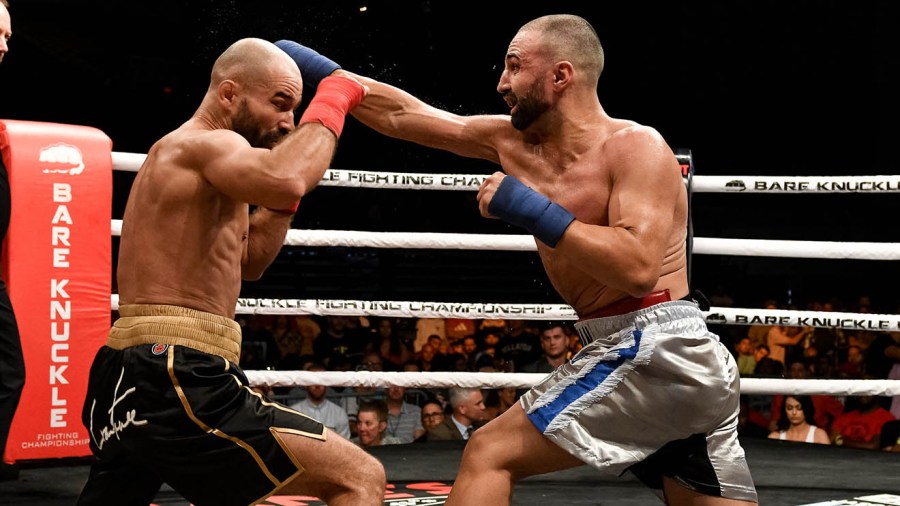 A short treatise against the revivification of face-mangling that one hopes will return James Figg to his unquiet grave, by Springs Toledo

SOUTHWARK Fair, wrote Pierce Egan, “was an uncommon scene of attraction to the inhabitants in and contiguous to London.” Granted to the city by royal decree in 1462, it marked the Nativity of the Blessed Virgin Mary and was held annually from September 7-9. By the early 18th century, it had become a raucous event lasting two weeks. There were jugglers and magicians, drummer girls and giants, puppeteers, pimps, pickpockets, and peep shows. There was James Figg. Advertisements were handed out in the crowd announcing the time and place where he would demonstrate his skill as a crippler and face-mangler. He established an amphitheatre just across the Thames to teach “the noble art of defence” though in his day, boxing was an unruly affair consisting of not only bare-knuckle brawling, but throws, submission holds, hair-pulling, and eye-gouging. You could, literally, kick a man when he was down.

The only man ever to defeat Figg was Ned Sutton. After a return match in 1727, Sutton may have wished none was ever had. The first round was fought with cutlasses, the second with bare fists (after both men finished off a bottle of port), and the third with clubs. It ended when Figg bashed Sutton’s knee in.

Figg died in 1734. His star student killed an opponent in 1741 and from that tragedy came Jack Broughton’s Rules in 1743, which sought as a stated purpose to “lesson the brutality of boxing.”  Among the rules was one that better reflected British manners: “no person is to hit his adversary when he is down.” Broughton also introduced the forerunners to modern boxing gloves, called “mufflers,” to protect the hands and minimize cuts during sparring and exhibition matches.

Southwark Fair eventually became a casualty of changing times, not least because of the increasing “ferocity and barbarity” in the boxing booths, the growing prevalence of PCBs (pain-curtailing booze), and “the various artifices adopted to get money.”

Boxing, of course, survived. Broughton’s reforms are one reason. The sport’s ability to attract powerful patrons is another. Its survival is ensured anyway by the obligation of every social group to modify and manage the natural aggression of its young men. Egan applauds this in Boxiana; or, Sketches of Ancient & Modern Pugilism, From the Days of the Renowned Broughton & Slack, to the Championship of Cribb (1813), and presents the sport as a standing example of British progressiveness. In Holland they were using long knives to deal with slights. In Italy the knives were short. Elsewhere in Europe, an affront to one’s family could call down a torrent of violence, while in the United States, the deadly duels of Aaron Burr and Andrew Jackson were news then as the murder rate in Chicago is news today. England’s love affair with boxiana brought on bloody noses and blackened eyes, said Egan, but no one was wearing black.

Boxing’s brutality was further modified when the London Prize Ring Rules (1838) established a roped-off square ring and prohibited butting, gouging, and kicking and the Queensberry Rules (1867) banned wrestling, standardized the time limit for rounds, and mandated gloves. But boxing had already migrated out of the boardrooms of London and reappeared in the United States where poor immigrants, the uneducated, and gamblers staged illegal bouts and took bets in the woods and on barges. Gloves, they snorted, were for fops.

Then, in 1878, a fair, not unlike Southwark, was held in Roxbury, Massachusetts. A large man appeared on the stage and issued a challenge that recalled Virgil’s words from the first century and Figg’s from the eighteenth: “If anyone here thinks I can’t lick him, let him stand up.” John L. Sullivan stood up. He made his way to the stage, tossed off his coat and rolled up his sleeves. The first right hand he threw sent the self-declared champion sailing headlong into the orchestra pit.

John L.’s handlebar mustache was in attendance at last month’s “Bare Knuckle Fighting Championship” pay-per-view card in Florida. It was over the lip of a fighter whose name you’d expect to find between “Tom Cribb” and “Tom Tring” in Egan’s Boxiana. Tom Shoaff fought a fighter billed as “Hellboy,” who screamed like a berserker at Shoaff before toeing the line. Shoaff had superior skill. His balance was good, his delivery better. He was dipping under Hellboy’s wild hooks and countering with short hooks. But Shoaff lost.

In the sweet science, aggression is tamed and taken apart by skill. In backslid boxing, aggression is the deciding factor. It’s all that matters. Two-minute rounds aren’t especially helpful to a thinking man and with each match scheduled for ten minutes at most, it isn’t an experience so much as an incident. At times it’s like watching an ambush, and those always favor the brute.

Most blows are aimed not at the body (where an elbow can break your hand), they’re driven into the face. To win, one need only aim for their opponents’ eyes, where the tissue is thin and the skull is jagged at the brows and upper cheekbones. Gruesome gashes were common on the card and aptly-named characters seemed to lurch out of centuries past—The Crippler. Spider Monkey. The Gunman. In the fifth bout, Joe Riggs landed a right hook on Walber Barros and Barros pulled away and began pawing at his eye, which looked to me like it had fallen out and left his lid dangling over the gap. Barros lost. Later, Johnny “Brutal” Bedford was mangled too, though he did some mangling of his own and was more aggressive about it.

“I would not put [that] belt around the neck of a goddamned dog!” roared John L. Sullivan in 1887. Back then, the National Police Gazette was the sole sanctioning organization for bare-knuckle fighting. Its revivification is intended to be a nod to history. It’s actually an affront to history.

John L., the magnificent brute who foreshadowed the controversies of Jack Johnson, the giant-toppling power of Joe Louis, and the ballyhoo of Muhammad Ali, is the reason why. After his legendary battle against Jake Kilrain—a battle that lasted two hours and sixteen minutes under a broiling Mississippi sun—Sullivan refused to fight again with naked fists. The Police Gazette insisted he defend his title thus so. It goaded him and challenged his manhood, but Sullivan was adamant. “Fighting under the Marquis of Queensberry rules is of such a nature that the superiority of the men can be demonstrated, to the satisfaction of everybody, in a reasonable length of time, and without obliging the audience to witness any unnecessary brutality,” he said.

He was right. Sullivan straddled both eras and saw the difference in an out of the ring. One saw him brawling on a barge surrounded by thieves and cutthroats, his name in the crime log, while the other brought him under the gaslights of Madison Square Garden, where Vanderbilt-sponsored events made the front page of the New York Times. Ruffians were in the audience; so were Wall Street brokers and women. Sullivan made his choice and carried the sport into the modern era.

Paulie Malignaggi is a Queensberry boxer with a hundred years of refinement behind him. He fought Artem Lobov, a mixed-martial artist and friend of Conor McGregor in the main event of the so-called BKFC. Malignaggi outboxed Lobov and lost the decision. He didn’t understand how that could happen, though he may have since realized that the only question asked in this dubious diversion is who-can-mangle-who the worst or first. He claimed to have been hit once, but the three gashes on his face told me he was hit three times. “Am I still pretty?” he asked afterward; he asked as two mouths moved, one of which split his eyebrow and was gruesomely expanding and contracting in sync with his lips.

He, like Hellboy, Lobov, and who knows how many others, ended the night with his commodities stuck in a pail of ice.

Bare-knuckle fighting is reappearing on the combat scene like a regressive gene. It beckons mediocre cage fighters and ex-contenders who have gone back. It heralds a return to earlier, uglier forms of boxing, long before it evolved into the sweet science. It conjures up Hogarth’s Southwark Fair (1733)—the maddened crowd, the frenzy for entertainment, and there, at bottom right, an unwelcome figure emerging from the shadows, astride a blind horse. It’s the old mangler James Figg, a cutlass in his hand and scars all over his onion head.