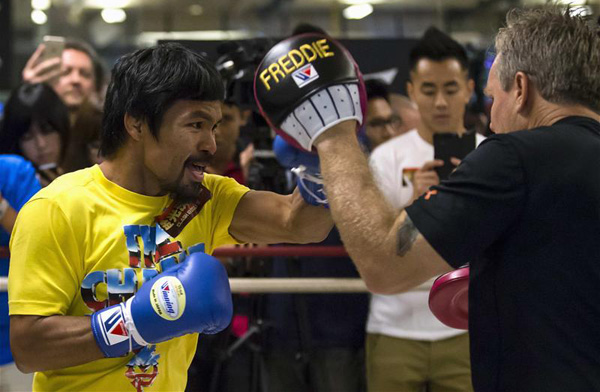 Pacquiao is set to end his short-lived retirement on that date, supposedly in Las Vegas though there has been interest from organisers in the Middle East to bring the Filipino over there.

Manny’s manager, Michaeal Koncz, told the Los Angeles Times that Pacquiao had agreed on Vargas as an opponent, however Arum took to social media to state that no such decision has yet been made.

Nothing is official regarding @MannyPacquiaoTR‘s next fight until all aspects are discussed next week in the Philippines.

Arum, who also promotes Vargas, has not ruled the Californian out but is simply conveying that nothing will be official until he meets with Pacquiao on August 10.

Vargas was a part of a three man list drawn up by Arum for Pacquiao’s comeback fight, alongside WBC and WBO super-lightweight king Terence Crawford and WBC welterweight champion Danny Garcia.

Roach told us he would rather not face Crawford right away, but insisted Pacquiao will “definitely” fight him.

Pacquiao retired in April after dominating Timothy Bradley in their rubber match, with a view to focusing on his blossoming political career in the Philippines.