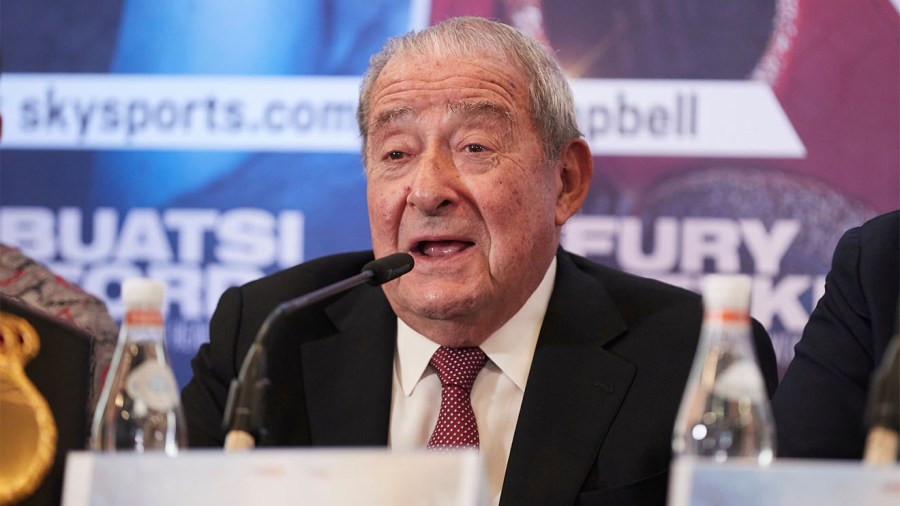 But he doesn't believe Tyson Fury will ever fight Anthony Joshua. Bob Arum explains why

WHEN Bob Arum talks, you listen. The veteran promoter has worked with Muhammad Ali amongst other luminaries in the sport. Currently as head of promotional behemoth Top Rank he represents some of today’s best fighters, including Vasyl Lomachenko and Terence Crawford. He is also guiding Tyson Fury, whom he co-promotes with Frank Warren, as the former heavyweight champion sets out to conquer America.

On Saturday (September 14) Fury will have his second bout in Las Vegas when he fights Otto Wallin at the T-Mobile Arena. “He became a huge entertainer,” Arum said of Fury. “There’s nobody like him in boxing. People can’t get enough of him on television. He says the most outlandish things but in a clever, intelligent way. He’s a dream to promote. And he’s a good fighter. He’s a really good fighter. [His previous opponent, Tom] Schwarz isn’t bad. Nobody’s beaten him. Nobody beat him, until Fury made him look silly. This Swedish guy that he’s fighting, Wallin, nobody’s beaten him. And he’s a big six foot six Swede. It’s the kind of fight that he should take, that he should have.”

Fury’s great rival, WBC heavyweight champion Deontay Wilder is represented by a rival promoter, Al Haymon’s Premier Boxing Champions and appears on alternative television networks. But Arum is adamant that he can bridge these divides to make their rematch. “Because it became obvious that Al Haymon and PBC were doing a lot of their business with Fox. We were doing all of our business with ESPN. Now Fox and ESPN have a whole history of working together. You know the idea that promoters say, ‘Well, I can’t do this because my fighter is fighting on one network and you have fighters fighting on the other network.’ That was the case with HBO and Showtime. And maybe it’s the case with BT and Sky here [in the UK]. But American networks have always worked together. So that, for example, professional football at the NFL is shared by all the networks and not only do they each have different games but they each promote the other guy’s games,” he explained. “So particularly Fox and ESPN have had this history of working together, not against each other, on different projects. So once Al aligned himself with Fox, and we’re on ESPN, it was a cinch for the heads of those networks to talk and work everything out.”

He continued, “They are working it out without us. When we did the Pacquiao-Mayweather fight, Mayweather fought for Showtime and Pacquiao fought for HBO and we had a devil of a time. They wanted two guys on the announcing team and HBO wanted two and they argued who the producer would be. I mean all of that stuff that for me as a promoter was crap but caused a lot of time and effort and back and forth. With the big boys, now with ESPN and Fox, that’s not going to be a problem. They are adults. The premium networks didn’t act as adults.”

The rematch though will be pushed back to 2020, with Arum expecting Wilder to fight a second time with Luiz Ortiz next. “Dangerous fight because Ortiz is old, he’s short, but he hits like a mother*****. He really punches,” he said. “It goes back to [Anthony] Joshua. Joshua had an opponent, Big Baby Miller, who tested dirty and got suspended by the New York commission. Now they were desperate, because they had Madison Square Garden in New York, to find an opponent for Joshua. So at first they tried Ortiz and for some crazy reason Haymon didn’t want Ortiz to fight Joshua, and he promised Ortiz a fight with Wilder so he got boxed into that. And another one of his fighters, who was a no hoper, Andy Ruiz signed to fight Joshua and we saw what happened.

“[Haymon] would have been happy to have Wilder go right in to fight Fury in November, which is what we wanted to do. But what was he going to do with Ortiz, who felt he should be the heavyweight champion because he would have beaten Joshua, because Ortiz feels, like a lot of people, that he’s a better fighter than Andy Ruiz? So Al has to bite the bullet and do that fight.”

Arum is confident that Fury will beat Wilder after their controversial draw, saying, “I think he beat Wilder the first time, but the second time he’s going to be a little bit more careful and not get hit on the chin by Wilder and I think they’ll shut Wilder out, and maybe even knock him out. I think Fury is really the goods.”

However he doesn’t believe Fury will ever fight Anthony Joshua, what would be a huge fight in the UK. “No, I think Joshua is finished. I think Andy Ruiz is going to walk through him again,” he said. “A lot of promoters think they understand boxing. They think they know boxing. Now one thing I know is I don’t know it. I rely on my matchmakers. I rely on people that really understand styles. Now, Joshua is a big guy, lazy fighter but he keeps you out there and he punches pretty good and eventually he can maybe knock you out or win a decision. The one thing Joshua’s not good at is pressure. That’s the only thing that Andy Ruiz has – pressure. He’s a gutty kid, he takes a good punch and his hands are much quicker than a heavyweight’s hands should be. He’s had 40 fights now including the Joshua fight. We promoted 38 of them. We still didn’t feel that Ruiz would beat Joshua. But we knew he was the kind of guy to really test Joshua. And Joshua flunked that test. And listen to me, he’s gonna flunk the next test. Because he can’t fight that style.”

He considers the Joshua-Ruiz rematch to be a mistake. “Joshua should not have gone right into the rematch,” Arum advises. “Get another fight, gradually fight pressure guys, build yourself, you’re still a big name and you can win the title back. But nobody understands long term plays anymore.”