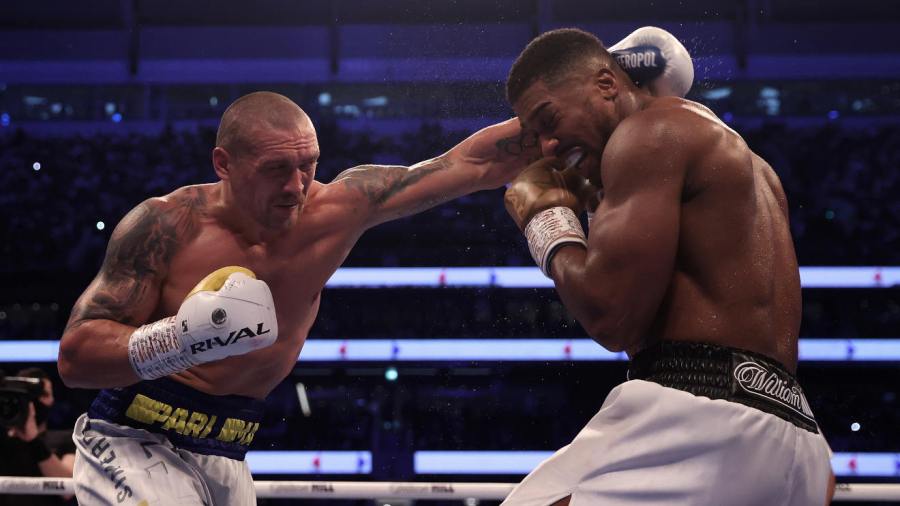 'I think Oleksandr Usyk is tougher for Anthony Joshua than even Tyson Fury.' But Top Rank promoter Bob Arum has a solution. He spoke exclusively to John Dennen in Las Vegas

WHEN Anthony Joshua first signed to fight Oleksandr Usyk, Bob Arum, Tyson Fury’s promoter feared the worst. The negotiations to make the Fury-Joshua fight had collapsed but there were hopes to restart them down the line. Usyk though has proven to be another complication.

“I knew what a great technician Usyk is. [We’ve had] no business dealings but I’ve spent a lot of quality time with him. He’s a hilarious man, he’s very intelligent. I really enjoyed being around him, I mean he’s a character and he’s a tremendously well-schooled fighter as is Lomachenko. So I wasn’t surprised,” he told Boxing News. “I told everybody Usyk is capable of beating him. I don’t bet on fights but a lot of people do, I told people take the odds and bet on Usyk.

“Joshua will do well with certain style fighters. Not a guy like Usyk who is so quick and is a southpaw… It was the fact that he was a leftie and Joshua moves wrong that gave him all the trouble. When he tried to come in, knowing he was losing the fight, as you saw he almost got knocked out. Another 10 seconds he gets knocked out.”

Arum reckons that if Joshua were to take the rematch and suffer a second consecutive loss to Usyk, it could scupper the Fury-Joshua fight. “Unless there is a magical change, which trust me doesn’t happen, there’s no way he [Joshua] can beat Usyk. Usyk will box him and if Joshua tries to take Usyk out of his boxing style, Usyk will knock him out,” Arum insisted. “A very, very tough fight. I think Usyk is tougher for Joshua than even Tyson Fury.”

But the promoter suggests a solution to the heavyweight dilemma. “[Fury-Usyk] would be a big unification but obviously Usyk has an obligation to fight Joshua, Joshua has the right to fight Usyk so Eddie [Hearn, Joshua’s promoter] would have to sit down with Joshua, I can sit down with Usyk because his manager is a close friend of mine, Egis Klimas, and I’d sit down and put a scenario together that would make sense. Two champions fight, the winner has to fight Joshua. What’s wrong with that? All of the fights are huge. Eddie, from Eddie’s standpoint, runs the risk of just doing Joshua-Usyk and being out of the picture completely,” he said.

Arum maintains that’s the only way to save Fury-Joshua. “And everybody makes a lot of money. But that’s sensible and that’s a word that’s not used very much in boxing,” Bob said. “To me it’s getting less and less complex but people are getting more and more complex… The boxing promoters that I was used to dealing with were much more realistic and much easier to make a deal with and to do the sensible thing. Now egos, networks, everything clouds the possibility of getting it done.”

There will be lingering resentment from the talks that failed to put together Joshua and Fury when they held all four of the major heavyweight belts between them. An arbitration obliged Fury to accept the contracted third fight with Wilder, which takes place this Saturday (October 9) at the T-Mobile Arena in Las Vegas. Arum though blames the length of time it was taking to confirm a deal for bringing Fury-Joshua to Saudi Arabia, with the allocation of television rights a problem that still needed to be unpicked.

“So it dragged on, dragged on,” Arum explained. “Meanwhile Wilder brought an arbitration which if we had closed and made everything official and announced the date with the Saudis, the arbitrator couldn’t and wouldn’t enjoin that [Wilder] fight. So that [Fury-Joshua] fight would have happened. They might have given Wilder damages but that’s okay. But since nothing was concrete the arbitrator ordered Fury to fight Wilder and that’s what we’re here for.”

A massive Wilder right hand could still destroy Arum’s masterplan for putting together Fury with Usyk and then ultimately, potentially Anthony Joshua. “One thing I know. Tyson Fury is a much better fighter than Deontay Wilder. That I know. Secondly this is boxing and Deontay Wilder has this dynamite punch so anything can happen. I don’t think it will but it can. That’s what he’s in with, a puncher’s chance. Tyson is a much better fighter. He proved it both fights,” Arum said. “Doing a fight like this, even without the Brits, which is a big loss, is a breath of fresh air. Spectators at the fight, it’s hard based on what existed before Covid but since the pandemic this is really a welcome change.”

No one can look beyond Fury-Wilder until after the fight on Saturday. The heavyweight division afterall has developed a habit of turning on its axis in recent weeks.