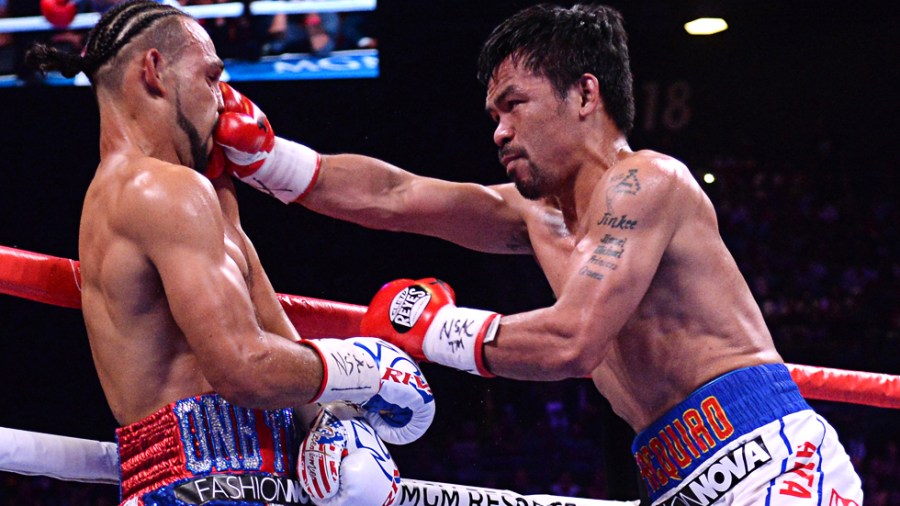 WE’RE halfway through 2019 and still await the identity of the spoilsport who will one day come along and wipe the ever-present smile from Manny Pacquiao’s face, consigning him to the retirement scrapheap (alongside the majority of his old foes).

But one thing we do know is that it won’t be Keith Thurman.

Thurman, the latest in a long line of Pacquiao opponents who said all the right stuff beforehand, couldn’t get to grips with the sprightly Filipino for enough of the 12 rounds they shared last night (July 20) in Las Vegas. Dropped in round one, when a promising and aggressive start was answered by a hard, numbing Pacquiao jab-cum-hook, Thurman soon realised his brand of power counter-punching wasn’t what was required to steal rounds from an eight-weight champion unrelenting in his work ethic and punch output. The decision, a split one, went the way of Pacquiao, as did the WBA welterweight title. Thurman, though competitive, didn’t argue.

In the end, the American understood they call the Senator a legend for a reason. Still going at 40, having began his career as a 106-pound light-flyweight, Pacquiao is a modern marvel whose big wins, of which there are plenty, take a backseat, in terms of achievement, to the sheer longevity he has managed to produce. When, for instance, he turned pro back in 1995, Thurman was just six years of age.

Frankly, this shouldn’t be happening (nor, it must be said, should high-profile world title fights be taking place without stringent drug-testing). Pacquiao, at this point, should at least be showing signs of regression and setting us up for the sad ending which, whether we like it or not, will invariably happen. But, for whatever reason, we’re getting none of that. We got no indication of it against Lucas Matthysse a year ago, nor against Broner in January. Pacquiao defeated both with ease. Thurman, too, an undefeated 30-year-old welterweight champion well-equipped to bring down the curtain, had no decisive answer to what Pacquiao brings these days.

These aren’t elite welterweights, granted. They are not opponents in the bracket of former Pacquiao foes: top-tier ones like Floyd Mayweather, Juan Manuel Marquez, Erik Morales, Marco Antonio Barrera, Oscar De La Hoya and Shane Mosley, for example, nor second-tier ones like Miguel Cotto, Timothy Bradley, Ricky Hatton and Antonio Margarito. Yet Thurman, 29-1 (22), was meant to be a move in that kind of direction. He was unbeaten. A puncher. A champion. Confident. Many, for these reasons, backed him to do the job. Many were wrong.

In terms of what’s next, the search for Manny Pacquiao’s reaper goes on. We know now that they will need to find someone superior to Thurman, a champion who boasts wins over fellow top contenders Shawn Porter and Danny Garcia. We also know very few fighters will be in a rush to be exposed by an old man, despite the gargantuan payday it will no doubt accrue.

That leaves the finger pointing at Terence Crawford or Errol Spence Jnr, that is, if we really want to see Pacquiao tested and – gulp – possibly beaten. Those two, WBO and IBF champion respectively, are undoubtedly a cut above everybody else in the division and possess hands quick enough to at least run the 40-year-old freak from General Santos City close.

Failing that, perhaps Pacquiao, 62-7-2 (39), will continue racking up wins and defying both the odds and boxing history. Perhaps he will now fancy the idea of venturing to the Middle East and obliging Amir Khan, a Brit obsessed with fighting Pacquiao for some time now. Khan, like Pacquiao, is known for his blistering hand speed and dazzling combinations. Yet, bizarrely, in contrast to Pacquiao, his former training partner, Khan has shown a fair amount of regression in recent times and some have even called for the 32-year-old’s retirement.

It’s a funny old game, boxing. An old man’s game, by all accounts.